In May this year (2011) a team lead by Paul M. Barrett of the Department of Palaeontology at the Natural History Museum in London published a paper in the journal Biology Letters in which they report the discovery of a single cervical vertebra (neck bone) of a spinosaurid dinosaur from the Early Cretaceous of Victoria, Australia. This is the first reported discovery of a spinosaurid dinosaur in Australia. 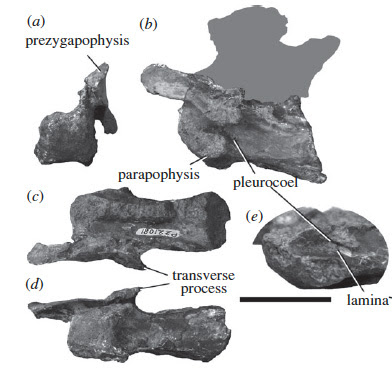 The Spinosaurid cervical vertebrae. Scale bar = 20 mm.
The spinosaurids are an unusual group of theropod dinosaurs with narrow elongate snouts that have been compared to those of crocodiles. Palaeobilologists have suggested that they may have fed in a similar way to modern crocodiles, preying on fish and small animals in an aquatic environment. Isotopic studies of the bones of spinosaurs have also suggested they spent much of their time in the water. The group takes its name from the first species discovered, Spinosaurus, which had elongate spines on its thoracic vertebrae (back bones), although these spines have not been found in other species, so the name is slightly misleading. It is theorized that the spines in Spinosaurus supported either a sail-like structure (popular with dinosaur artists and the popular press) or a camel-like hump (popular with palaeobiologists).

An artist's impression of Spinosaurus by dinosaur artist and palaeontologist Lukas Panzarin.
The spinosaurs belong to a larger group of theropod dinosaurs called the Megalosauroidea, which groups them with the megalosaurs (unsurprisingly) and a few other species that are apparently closer to these two groups than they are to the Avetheropoda, the group which includes allosaurs and birds. The spinosaurs appeared in the mid Jurassic and became fairly abundant in the early Cretaceous. They are not known from the later Cretaceous, though some isolated teeth of possible spinosau origin have been found.

The Australian specimen closely resembles a neck vertebrae from Baryonyx walkeri, a species known from the Early Cretaceous Wealden Beds of Southern England, though sensibly Barrett et al. have not attempted to assign a species to this single bone. A Baryonyx specimen from the Wealden beds was found with fish scales in its stomach, further supporting the aquatic lifestyle theory for spinosaurs. 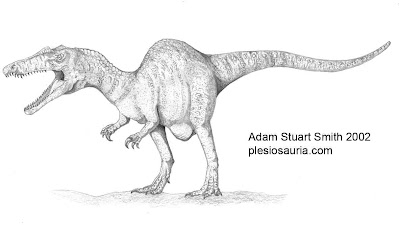 The specimen was discovered in the Eumeralla Formtion, part of the Early Cretaceous Otway Group, to the east of Crayfish Bay, Victoria. The Eumeralla Formation is a series of mudstones, siltstones and volcanogenic sandstones, thought to represent a floodplain with meandering rivers, swampland and many shallow lakes.
Barrett et al. also note that the absence of spinosaurs, and other groups, from Australia has been used in the past to support theories about the break up of the ancient supercontinent of Gondwana, on the basis that groups absent from a particular chunk of the former landmass indicate that the piece in question had split off from the main before that species had emerged. Barrett et al. dismiss this approach since as we discover more about ancient faunas, we increasingly find species in places where we had thought that they were absent, and that even if we do not find evidence for the presence of a species, that does not mean it was not there.

See also The Ashdown Maniraptoran,
Head-Butting in a Pachycephalosaur
and Dinosaurs on Sciency Thoughts YouTube.
Posted by Joe Bauwens at 21:36