Russian oil rig capsizes and sinks in under 20 minutes in the Sea of Othotsk.

On Sunday 18 December 2011 the Kolskaya exploration platform capsized in Sea of Othotsk in the Russian Far East, near the island of Sakhalin, while being towed towards the Kamchatka Peninsula, after completing a round of experimental drillings. The rig was carrying 67 people, of whom (at the time of writing) seven have been confirmed dead and 14 recovered alive, though suffering from acute hypothermia. The platform sank in under 20 minutes after running into trouble, before a helecopter dispatched to remove the crew arrived; lifeboats have been seen in the water without survivors, suggesting that the crew did not have time to evacuate properly. The rig was carrying only a small amount of fuel oil, so a major ecological disaster is not foreseen; the Sea of Othotsk is regarded by Russians as the world's richest fishery, so a major oil spill there would be a major problem for the authorities.


Russian Television report on the disaster.

The Finnish built Kolskaya was operated by ArktikMorNefteGazRazvedka, a company specializing in offshore exploration in the Arctic, on behalf of the state-controlled hydrocarbons giant Gazprom.

The Sea of Okhotsk lies between Kamchatka in the east and the Kuril Islands in the west; to the north it borders on the south Siberian Coast, and in the south the north coast of Hokkaido. It's deepest point is over 3000 m below the surface, but most of the Sea is less than 1000 m deep, giving it excellent potential for offshore exploration, despite it's harsh climate. It is estimated that there are 324 million tonnes of oil and 997 million tonnes of gas buried on the Sakhalin Island Shelf, the area where Kolskaya had been operating. 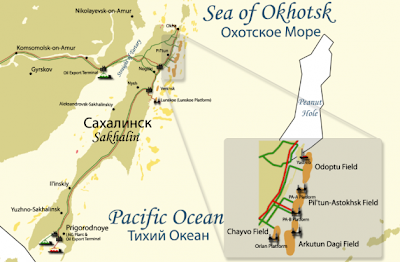 Oil reserves currently being exploited on the Sakhalin Island Shelf (orange), and with the potential for future exploitation (yellow).

See also The UN reports on oil pollution in Ogoniland, Drilling for oil on the Ningaloo Reef and Greenpeace activists occupy the offices of Cairn Energy.