Earthquake off the Dorset Coast.

On Sunday 26 August 2012 slightly after 7.35 pm British Summertime (slightly after 8.35 GMT), the British Geological Survey recorded an Earthquake of the coast of Dorset, on the southern English coast, roughly 13 km south of Weymouth at a depth if about 9 km, and measuring 2.0 on the Richter Scale. An Earthquake this small is highly unlikely to have caused any damage, and may not even have been notticed by anyone; or, if it was felt it may not have been recognised as an Earthquake. 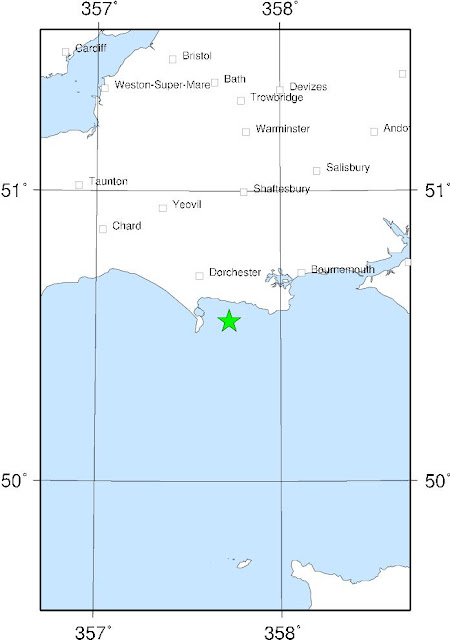 Map showing the location of the August 26 Earthquake. BGS.﻿

The precice cause of Earthquakes in the UK can be hard to deternmine; the country is not near any active plate margins, but it is subject to some extent to stresses caused by the expansion of the Atlantic Ocean, which is pushing Europe to the east, and the impact of Africa into Europe from the south. The British Isles are also affected to some extent by lesser areas of extension beneath the North Sea, the Rhine Valley and the Bay of Biscay. Then there is glacial rebound; the north of Brtiain was covered by ice hundreds of meters thick until about 10 000 years ago. This pushed the rocks of the British lithosphere down into the underlying mantle, rocks that are slowly rebounding now the ice has gone. Finally a quake in this area could have been caused by a submarine landslip, or even an underwater explosion, though the Portland Coastguard have no record of any known explosions in the Channel at this time.

Witness accounts of Earthquakes can help geologists to understand their causes; if you felt this quake you can report it to the BGS here. The BGS would also be interested in hearing from people who were in the area but did not feel the quake, which is also useful information.

See also Monmouth Beach, Lyme, closed due to danger of landslips, Woman killed by rockfall on Dorset beach, Earthquake in the Channel Islands, Earthquake beneath the English Channel and Earthquakes on Sciency Thoughts YouTube.