In 1972 two small shallow lakes in southwest Tasmania, Lake Pedder and Lake Edgar, were inundated to create a reservoir to feed a hydroelectric power scheme, also called Lake Pedder, in the Serpentine River Valley. This was a source of great concern to biologists as the lakes were known to be host to a number of highly endemic species, some of which had never been formally described by scientists, including Isopod Crustaceans.


In a paper published in the journal Zootaxa on 1 August 2012, George Wilson of the Australian Museum in Sydney and Andrew Osborn and Nigel Forteath of the Queen Victoria Museum & Art Gallery in Launceston, Tasmania describe two new species of Isopod Crustaceans recovered by hand dredging Lake Pedder at the sites of the original Lake Pedder and the former Lake Edgar. Both species are placed within the previously described genus Colubotelson. 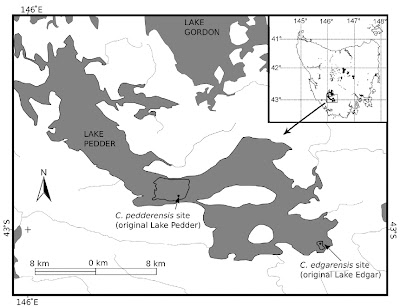 Map showing the locations where the new Crustaceans were found. Wilson et al. (2012).

The first new species is named as Colubotelson edgarensis; having been found within the extent of the former Lake Edgar, although it has subsequently been found among undescribed specimens collected from the original Lake Pedder in 1972. It was found at a depth of 9.2 m, the deepest point in the former Lake Edgar being 1.7 m, and the deepest point in the original Lake Pedder being slightly under 3 m. Colubotelson edgarensis is an (average length) 10 mm, Isopod Crustacean. It is brown-to-beige in colour, with cream patterning on its semi-translucent white head and a dark brown band between the eyes. 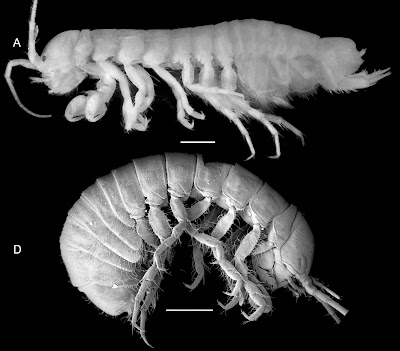 The second species is named Colubotelson pedderensis, having been found within the extent of the original Lake Pedder, at a depth of 14.2 m. It is an (average length) 10 mm, brown Crustacean with irregular white bars. 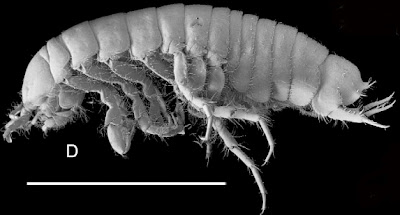