Activity in the Tengger Caldera.

The Tengger Volcanic Complex is a string of five overlapping stratovolcanoes (cone-shaped volcanoes) forming a single massif, extending northward from the Semeru Volcano in East Java. The youngest and most active of these being Mount Bromo. The whole massif sits within a vast caldera (volcanic crater), left by the explosion of an ancient volcano about 150 000 years ago. The volcanoes are at the center of this caldera, surrounded by a vast sea of sand, the Tengger Sand Sea, and forms part of the Bromo Tengger Semeru National Park. 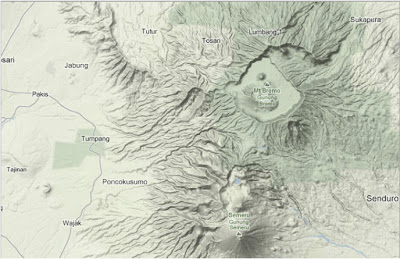 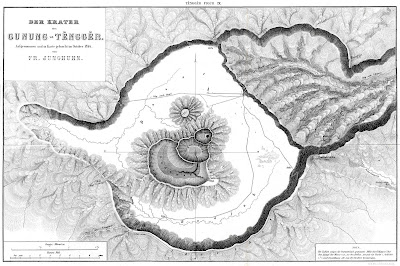 The volcano is one of Java's most active, having undergone at least 50 explosive eruptions since 1804, the most recent of which was in June 2011. The volcano has been more-or-less quiet since March this year (2012) when a number of white plumes where seen over the caldera. During September and early October, a number of white plumes where again seen over the Caldera, rising as high as 50 m above the Bromo crater. During early October sulphurous smells were also recorded in the area, and a number of small tremors recorded (such tremors are important near volcanoes, as they may reflect movement in underground magma chambers). 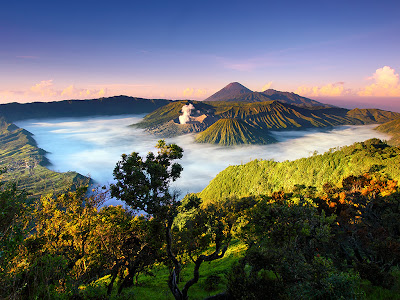 A view of the Tengger Caldera from the north, showing the smaller stratovolcanoes within; a small plume is issuing from Mount Bromo to the left. The peak in the foreground is Mount Batok, the larger peak in the background is the Semeru Volcano, which is to the south of the Caldera. The Malay Archipelago.

Java lies on the southern part of the Sunda Plate, to the north of the Sunda, or Java, Trench, along which the Indo-Australian Plate is being subducted beneath the Sunda Plate. As the Indo-Australian Plate sinks into the Earth it is heated by friction with the overlying Sunda Plate and the heat of the Planet's interior, which causes the plate to partially melt. Some of the melted material then rises through the overlying Sunda Plate, fueling the volcanoes of Java, and Sumatra to the northeast. 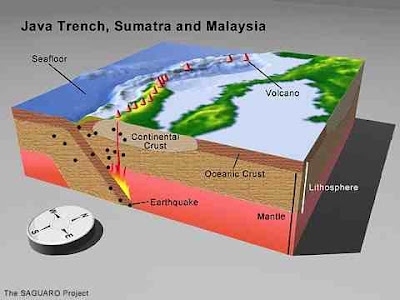 The passage of the Indo-Australian Plate beneath Sumatra. Auburn University.