Eight people are known to have died following a series of tornadoes in the American Midwest on Sunday 17 November 2013, which also left several hundred people with injuries requiring hospital treatment. Extensive damage was also caused in Illinois, Michigan, Indiana and Kentucky. Winds of up to 111 km per hour were recorded, combined with hailstorms as large as tennis balls. All these states form part of America's 'Tornado Ally', but events such as this in November are very unusual. 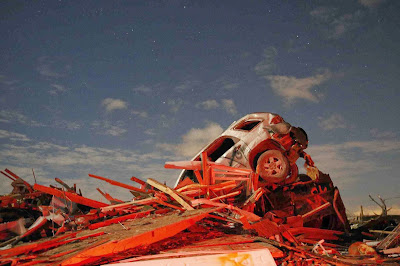 Three people were killed in Brookport in Masaac County in southern Illinois. Robert Harmon (66) and neighbour Kathy George (58) were killed when their homes were ripped apart on the outskirts of the town. Kathy's husband, Charles, was found alive but injured in a nearby pond, where he had been deposited by the storm. Scholitta Burrus (63) was killed when her home in a mobile home park inside the town was destroyed.

In New Minden in Washington county, also Illinois, Joseph Hoy (80) was discovered about 100 m from the remains of his home, while his sister Frances Hoy (78) was pulled alive from the rubble but died in hospital later. The villages Lutherian Church was also destroyed by the storm.

A third person was killed in the city of Washington in Tazewell County, Illionois, but has not yet been named.

In Michigan Ryan Rickman (21) was killed when a tree fell on his car in Leslie and an unnamed 14-year-old boy died after coming into contact with downed power cables in Detroit. 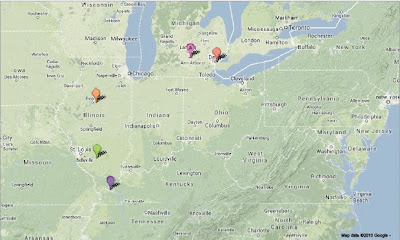 Tornadoes can occur anywhere in the world, but are most common, and most severe, in the area of the American mid-west known as 'Tornado Ally', running from Texas to Minnisota, which is fueled by moist air currents from over the warm enclosed waters of the Gulf of Mexico interacting with cool fast moving jet stream winds from the Rocky Mountains. Many climatologists are concerned that rising temperatures over the Gulf of Mexico will lead to more frequent and more severe typhoon events. 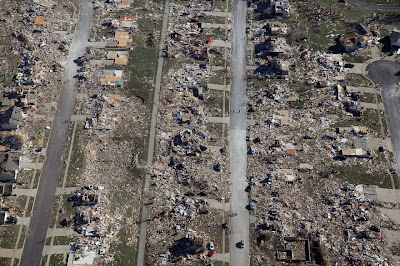 Trail of destruction left by a tornado in Washington, Illinois. Tasos Katopodis/Getty Images.