Asteroid 388838 (2008 EZ5) passed by the Earth at a distance of 14 750 000 km (over 38 times the average distance between the Earth and the Moon), slightly before 11.00 pm GMT on Tuesday 22 April 2014. There was no danger of the asteroid hitting us, though were it to do so it would present a considerable threat. 388838 (2008 EZ5) is estimated to have an equivalent diameter of 230-710 m (i.e a spherical object with the same volume as the asteroid would be 230-710 m in diameter) and an object of this size would pass straight through the Earth's atmosphere and impact the ground, resulting in an explosion 25 000-1 000 000 times as large as the one caused by the Hiroshima bomb, and the formation of a crater 3.5-11 km in diameter. Such an event would cause devastation over n extremely large area, and result in climatic effects lasting decades if not centuries. 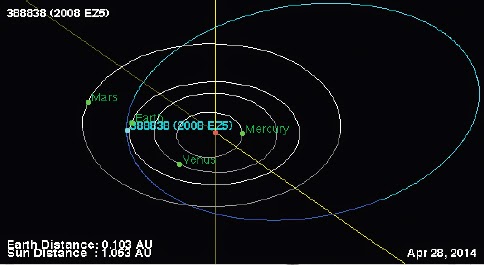 
388838 (2008 EZ5) was discovered on 4 March 2008 by the University of Arizona's Mt. Lemmon Survey at the Steward Observatory on Mount Lemmon in the Catalina Mountains north of Tucson. The designation 2008 EZ5 implies that the asteroid was the 150th  object (object Z5) discovered in the first half  of March 2008 (period 2008 E), while the number 388838 implies that it was the 388 838th asteroid discovered (asteroids are not given this longer number immediately, in order to rule out false or duplicate observations)