99942 (2004 MN4) Apophis was discovered on 19 June 2004 by the Spacewatch Project at  University of Arizona's Lunar and Planetary Laboratory operating out of the Kitt Peak Observatory. The designation 2004 MN4 indicates that it was the 113th asteroid (asteroid N13) discovered in the second half of June 2004 (period 2004 M) while the number 99942 indicates that it was the 99 942nd asteroid discovered (asteroids are not given such a name immediately, to avoid numbering false or duplicate observations) and named Apophis refers to an Egyptian god of darkness and destruction.

It was initially estimated to have an equivalent diameter of between 320 m and 970 m (i.e. a spherical object with the same volume would have a diameter of between 320 m and 970 m), and was calculated to have a 2.7% chance of impacting the Earth in April 2029. An object of this size would be capable of passing straight through the Earth’s atmosphere resulting in an explosion up to 250 000 times as large as the one caused by the Hiroshima bomb, the formation of a crater between 5 and 12 km in diameter, and climatic effects that would last decades if not centuries. As such 99942 (2004 MN4) Apophis was also classified as a Potentially Hazardous Asteroid. 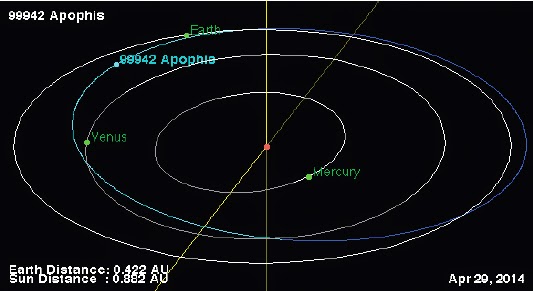 Subsequent observations have ruled out the possibility of 99942 (2004 MN4) Apophis impacting the Earth in 2029, though it is still thought that it will pass extremely close, reaching about 38 310 km from the Earth at its closest, roughly 10% of the average distance between the Earth and the Moon, and within orbits of some satellites, however the possibility of such a collision occurring at some point in the future cannot be ruled out.

The size of the asteroid has also been recalculated, and reduced to about 270 m, still very bad news should it hit us, but a considerable improvement on the original size estimation. Observations made in the near infrared part of the spectrum suggested that 99942 (2004 MN4) Apophis is a Sq-class asteroid (a stoney asteroid with a high olivine and pyroxine content) with a composition similar to an LL ordinary chondrite type meteorite (Low iron, Low metal ordinary chondrite). This is similar to the asteroid 25143 (1998 SF36) Itokawa, which was visited by the Japan Aerospace Exploration Agency's Hayabusa Probe in 2005. 25143 (1998 SF36) Itokawa has an estimated porosity of 40%, and if the same is true for 99942 (2004 MN4) Apophis then it is likely to have a mass of about 20 000 000 tons. Such an object impacting the Earth would be predicted to result in a 375 Megatonne explosion, over 22 000 times as large as that caused by the Hiroshima bomb, resulting in the formation of a crater 3 km in diameter.

In a paper published in the journal Astronomy & Astrophysics on 24 April 2014, and on the arXiv database at Cornell University Library on 23 April 2014, a team of scientists led by Thomas Müller of the Max-Planck-Institut für extraterrestrische Physik, describe the results of a series of observations of 99942 (2004 MN4) Apophis in the far infrared part of the spectrum using the Herschel Space Observatory’s Photodetector Array Camera and Spectrometer instrument on 6 January and 14 March 2013.

Each observation consisted of a series of scans at different wavelengths, used to create a mini scan-map of the Asteroid. These scan-maps were then compared to a physical shape model of 99942 (2004 MN4) Apophis created by a team of scientists led by Petr Pravec of the Astronomical Institute of the Academy of Sciences of the Czech Republic to create a three dimensional thermal map of the asteroid. 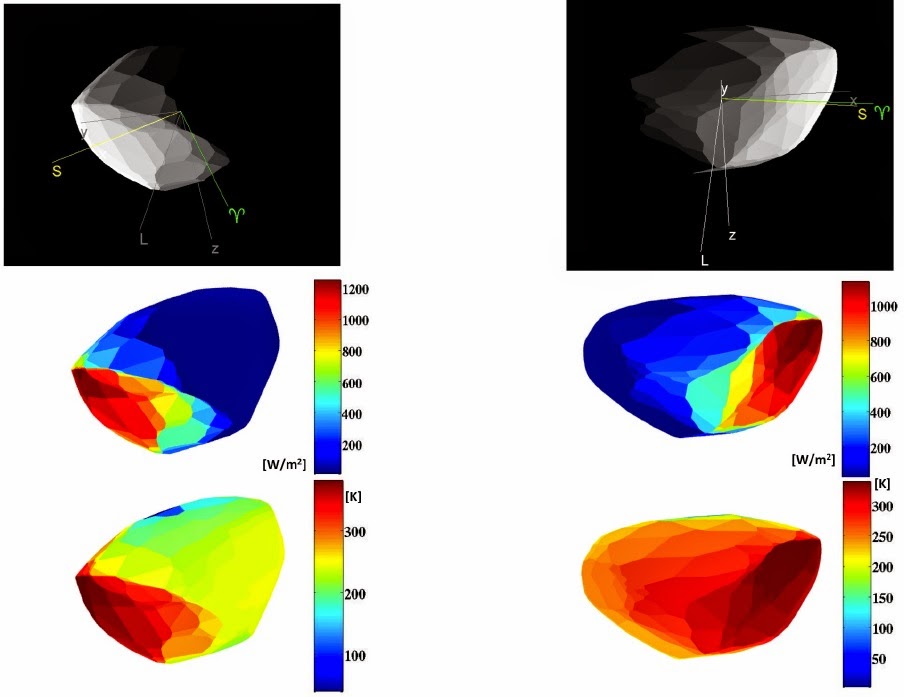 Viewing geometry during the two Herschel observing epochs at phase angles of roughly 60˚ angle before (left) and after opposition (right). Top: calculated observing geometry on basis of the nominal solution in Pravec et al. (2014). L is fixed vector of angular momentum, the Aries sign is the X axis of the ecliptical frame, S is a direction to the Sun, and x, y, z are the axes of the asteroid co-rotating coordinate frame (corresponding to the smallest, intermediate and the largest moment of inertia of the body, respectively). Middle: The solar insolation in [W/m²]. Bottom: TPM temperature calculations assuming a Itokawa-like thermal inertia of 600 Jm¯²s¯⁰˙⁵K¯¹. Müller et al (2014).

Using this thermal profile it was possible to form a revised model of the size of 99942 (2004 MN4) Apophis, using the apparent distances between the two ends of the asteroid on the two observation dates. This suggests an asteroid with an equivalent diameter of 371-385 m, considerably larger than the previous model.

The temperature differentiation between the two ends of the object suggest that it has a thermal inertia of between 250 and 800 Jm¯²s¯⁰˙⁵K¯¹ (this is the capacity of the object to redistribute its heat internally by conduction as one side is heated by the Sun and the other is in darkness), probably about 600 Jm¯²s¯⁰˙⁵K¯¹. This suggests that 99942 (2004 MN4) Apophis is probably comprised of a small amount of fine regolith (which has a low conductivity) and a larger volume of denser rocks and boulders (with higher conductivities). This suggests that Apophis is slightly larger and more dense than 25143 (1998 SF36) Itokawa, and with a mass of about 53 000 000 tonnes.

Such an object would clearly be more dangerous than previously thought, and if it were to collide with the Earth it would result in an explosion around 16 000-16 500 times as large as the Hiroshima bomb, and the formation of a crater up to 6 km across. However in addition to raising the danger level associated with 99942 (2004 MN4) Apophis, the new more refined model of the asteroids mass and density should allow a more detailed modelling of its orbital properties, enabling us to make better predictions of the threat it presents.