Lacustrine Gastropods from the Late Miocene Turiec Basin of Slovakia.

The Turiec Basin of the Slovakian Carpathian mountains was home to a closed freshwater lake for several million years during the Late Miocene, a lake that developed in a half-graben system (an area where tectonic movements are drawing rocks apart at the surface, causing thining of the crust and subsidence) and which developed a unique flora and fauna of endemic species (species not found elsewhere). This has been studied since the nineteenth century, with some groups from the lake (such as Ostracods) being very well understood, while others are less well known. Mollsuscs from Lake Turiec were first recorded in the 1860s, and have been intermittently described ever since; however the group has been the subject of few systematic reviews and the work on it is known to contian many imprecise descriptions and misidentifications.

In a paper published in the journal Geologica Carpathia in April 2015, Thomas Nuebauer and Mathias Harzhauser of the Department of Geology & Paleontology at the Vienna Natural History Museum and Radovan Pipík of the Geological Institute of the Slovak Academy of Sciences review the Gastropods of Lake Turiec, in which they describe four new species.

The first new species described is placed in the genus Viviparus, a widespread group of freshwater Snails with a fossil record dating back to the Jurassic, and given the specific name pipiki, in honour of Radovan Pipík of the Slovak Academy of Sciences for his work on the geology of Lake Turiec. Snails assigned to the genus Viviparus have been described from the Lake Turied deposits since the 1920s (and Snails described earlier are now assigned to this genus today), but oppinions have varied as to the specific assignment of these Snails, which have been placed in a number of fossil and extant species, but which Nuebauer et al. conclude should be described as a unique species found only in the Turiec deposits. 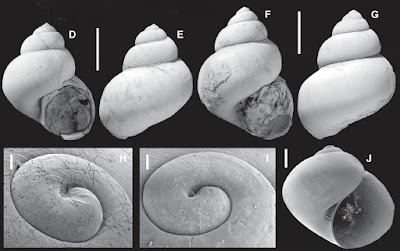 Viviparus pipiki is broad and conical with a thick shell and up to six whorls. The shape of the shell changed considerably as they grew, with early whorls being broadly conical, weakly convex and having a wide, ovoid, apature, while later whorls are conical to weakly ovoid and strongly convex, with a tear-shaped appature with a small posterior notch.


The second new species described is placed in the genus Melanopsis, which is today found in Europe, Anatolia, North Africa and parts of Austrelasia and which first appeared in the Cretaceous, and given the specific name glaubrechti, in honour of Matthias Glaubrecht of the Museum für Naturkunde Berlin, an expert on Melanopsid Snails. This species is described from 30 whole and fragmentary specimens from the Martin Brickyard, which were described by Czech palaeontologist Remeš as specimens of Melanoptychia pseudoscalaria, a species known from the Early Miocene of Moravia, a diagnisis rejected by Nuebauer et al. Melanopsis glaubrechti has a slender drop-shaped shell with distinct ribs and up to nine whorls.


The third new species described is placed in the genus Tournouerina, which previously contains a single Mio-Pliocene species, and is given the specific name turiecensis, meaninf 'from Turiec'. This species is described from 35 specimens from Martin Brickyard, previously assigned to the species Lithoglyphus nannus in 2012 by Nadežda Krstić, Ljubinko Savić, and Gordana Jovanović, a diagnosis again rejected by Nuebauer et al. Tournouerina turiecensis is a small Snail shell with up to six convex whorls separated by deep sutures. The final whorl has a large drop-shaped apature with a thickened posterior tip.

The fourth species described is placed in the genus Radix, airbreathing freshwater Snails found throughout the Northern Hemisphere today and known to have been present by the Miocene, and given the specific name kovaci, in honour of Michal Kováč of Univerzita Komenského, for his work on the sedimentary evolution and stratigraphy of the Pannonian Basin. The species is described from a series of previously undescribed specimens from different locations in the Turiec Basin (many from drill cores). The majority of these specimens are fragmentary, making a full description difficult, but this is a small shell with four whorls, the last of which expands rapidly to the appature, which is eliptical with a small notch at the base, where it contacts the penultimate whorl. 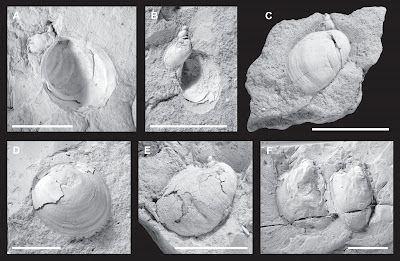 In addition to the newly described species Nuebauer et al. refur several Gastropod specimens to the species Theodoxus postcrenulatus, transfer the species Kosovia compressa to the new genus Popovicia and specimens assigned to the genera Radix and Planorbis but which cannot be assigned to species level.