Three men are believed to have died after a cave in at the abandoned Bosveld Gold Mine near Pongola in northeastern KwaZulu Natal on Friday 15 April 2016. The men were members of a group of 13 miners, thought to have been from Lesotho, who were working in the mine when part of the roof collapsed. Five of the miners were trapped in the incident, with five of the those who escaped fleeing, while three contacted a local community to ask for help. Rescue teams using search Dogs were able to recover two of the trapped men, and were able to talk briefly to a third, but this contact was lost and could not be re-established, and the rescue bid was eventually halted due to concerns about safety. 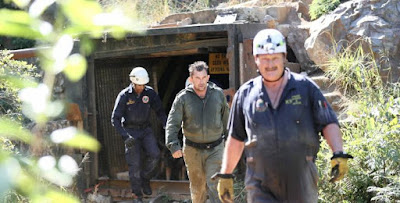 Rescue workers at the Bosveld Mine. IOL.

The Bosveld Gold Mine ceased operations in 2007, but as with other mines in the area has been repeatedly targeted by illegal artisanal miners known locally as 'zama zamas', despite frequent warnings that the site is unsafe. Police in the area have reported arresting over a hundred such miners in the area in the last year, largely drawn from poor communities by the potentially earnings from extracting precious minerals, though there are persistent rumours that wealthier and more influential figures may be behind such activities.