Monitoring turbidity currents on the margin of the Gaoping Submarine Canyon off Taiwan.

Turbidity currents are sharp increases in the amount of sediment being transported downslope in marine environments. These can be triggered by a variety of causes, including earthquakes, non-seismogenic slope failures, river floods, atmosphere-related hydrodynamic events, and Human activities, though those related to Earthquakes are the best studied, due to the damage caused to submarine cables following the 1929 Grand Banks Earthquake on the east coast of Canada. Deposits left by ancient turbidity currents (turbidites) have a distinctive structure, typically course grained at the base with the sediment growing finer upwards within the deposit. Since the conditions for the formation of such deposits tend to persist for long periods of time, sequences made up of many repeated turbidite deposits are frequently encountered in the geological record. These turbidites are valued by sedimentary geologists, as they are distinctive and tend to cover wide areas, helping to build a clear picture of the geology of a region, and are prized even more highly by palaeontologists, as they often contain excellent fossils, since organisms can be buried rapidly, helping them to enter the fossil record; for example the famous soft bodied Cambrian fossils of the Burgess Shale come from turbidite deposits.

Taiwan has a complex tectonic setting, lying on the boundary between the Eurasian and Philippine Plates,making the island particularly prone to Earthquakes. It is also in a part of the northwest Pacific particularly vulnerable to Typhoons, typically encountering the wettest (i.e most water-laden) tropical storms in the northwest Pacific, and suffering some of the highest erosion rates recorded anywhere on Earth.

Zhang et al. placed a mooring system 146 km downstream from the head of the Gaoping Submarine Canyon, and 3.5 km laterally, and 490 m vertically from the thalweg (line connecting the lowest points of successive cross-sections along the course of a valley). The equipment was not placed in the deepest part of the canyon due to the danger of it being overwhelmed by high sediment flows, the canyon is known for a high number of communication cable breaks, with one turbidity event during the study (in August 2015) resulting in six such breaks. The mooring system comprised two sediment traps (at depths of 510 and 2074 m - the later being about 30 m above the seafloor), a long-range acoustic Doppler current profiler, a recording current meter, and a conductivity-temperature-depth meter.

A total of 23 turbidity currents were identified during the study period, identified by the sedimentation rate reaching six times the background level. During these events the sediment levels collected by the upper sediment traps was roughly two orders of magnitude lower than at the lower sediment trap - which indicates that these were turbidity flows, with sediment running down the canyon, rather than the result of sediments falling onto the water surface for some reason, such as a dust storm or volcanic ash fall, and then sinking to the bottom.


Fifteen of these events were closely related to typhoons passing across Taiwan (sixteen typhoons passed over the island during the study period, but two of them were more-or-less simultaneous, resulting in a single event). These events were marked by a sharp increase in a sharp increase in discharge on the Gaoping River (up to three times the dry season average flow) that preceded the turbidity events. A further five turbidty currents were associated with periods of increased rainfall and river discharge that were not related to typhoons.

None of the events could be directly associated with an Earthquake, though the study period did include one significant event, a Magnitude 6.5 Earthquake at Kaohsiung (southern Taiwan) in February 2016, which was followed by a series of significant aftershocks, though it cannot be ruled out that subsequent events were related to this, as the Earthquake could have weakened sediment structures, making them more prone to subsequently collapsing. 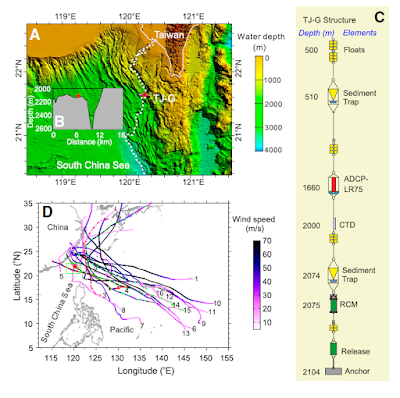 Thus 20 of the 23 events could be directly correlated to high rainfall levels, with the remaining three potentially related to Earthquakes or seasonal variability of deep-sea circulation. The onset of the turbidiy current typically occurred about two days after peak rainfall, and was accompanied by a drop in salinity and increase in water temperature, which further imply that the flows were linked to increased water discharge from the Gaoping River.

The duration of the turbidity currents ranged from a week to a month, exceptionally long compared to previous records, with the longest such event recorded before being a ten day current in the Congo Canyon of the west coast of Central Africa in March 2001. The combined duration of all the turbidity currents was 368 days, or about 30% of the study period (1228 days). 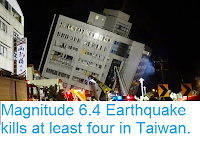 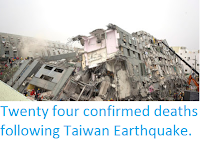 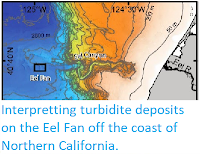 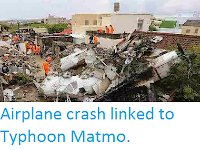 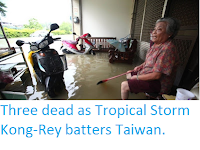 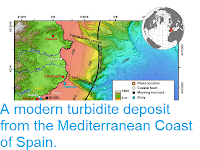