Scorpions are thought to have been among the earliest Animals to colonize the land, with specimens known from the Silurian and Devonian of Lauraia (Europe plus North America) and Devonian of China that appear to have been essentially similar to modern forms. These earliest Scorpions appear to have dwelt close to water in tropical and subtropical environments, but to have been entirely terrestrial in habit; an environment favored by the majority of modern Scorpions.

In a paper published in the journal African Invertebrates on 28 August 2013, Robert Gess of the Bernard Price Institute for Palaeontological Research at the University of the Witwatersrand describes a new species of Scorpion from the Late Devonian Witpoort Formation at Waterloo Farm near Grahamstown in Eastern Cape, South Africa.

The new species is named Gondwanascorpio emzantsiensis, where ‘Gondwanascorpio’ means ‘Scorpion from Gondwana’ (the ancient supercontinent that comprised South America, Africa, Madagascar, India, Antarctica, Australia and New Zealand) and ‘emzantsiensis’ means coming from umZantsi (Xhosa for South Africa). The species is described from two fragments, one of a claw the other the tip of a tail. These resemble those of species known to have been present in Laurasia and China by this time. Although Scorpions are known from the Silurian onwards and a diverse terrestrial fauna is known from the Devonian in the Northern Hemisphere, this is the earliest known Scorpion, and animal of any description, from Gondwana, where fossils of terrestrial Animals are not otherwise known till the Early Permian of the Karoo Supergroup (it is likely that a more diverse pre-Permian Gondwanan Fauna did exist, but that it has not been preserved or discovered, much of the supercontinent having suffered extensive glaciation during the Carboniferous).

More remarkably, the Waterloo Farm locality was far closer to the South Pole than any modern Scorpion would be expected to be found. This is likely to have been indicative of the rapidly warming conditions of the Late Devonian, which have been connected to the Frasnian-Farmenian extinction event. 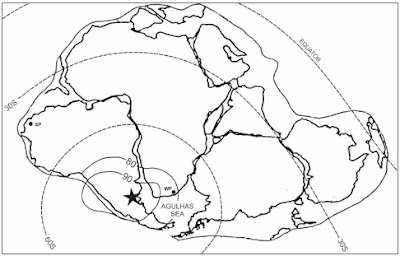