The United States Geological Survey recorded a Magnitude 5.2 Earthquake at a depth of 10 km in the northeast of the Povince of Isernia in the Campania Region of Italy, slightly before 6.10 pm local time (slightly before 5.10 pm GMT) on Sunday 29 December 2013. There are no reports of any injuries relating to this event, but minor damage to buildings has been reported in nearby towns and the quake was felt as far away as Rome, 167 km to the northwest of the epicenter. 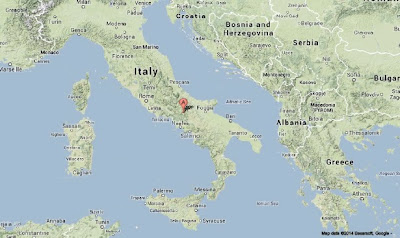 The approximate location of the 29 December 2013 Campania Earthquake. Google Maps.


Italy is in an unusual tectonic setting, with the west of the country lying on the Eurasian Plate, but the east of the country lying on the Adriatic Plate, a microplate which broke away from North Africa some time in the past and which is now wedged into the southern margin of Europe, underlying eastern Italy, the Adriatic Sea and the west of the Balkan Peninsula. This, combined with the northward movement of the African Plate into Italy from the south, leads to uplift in the Apennine Mountains that run the length of the country, and makes Italy extremely prone to Earthquakes.
Historically Italy has suffered a number of devastating Earthquakes that lead to large numbers of casualties, though in recent decades the country has made serious attempts to prevent this, with better warning systems and tighter building regulations, though the large number of historic buildings in Italy, which cannot easily be replaced (and any attempt to do so would be unlikely to succeed due to their high cultural value), meaning that the country is unlikely to be completely risk free any time soon.
This has been complicated by an ongoing series of corruption scandals in the Italian construction industry, and, alarmingly, the decision by a court in October 2012 to gaol six leading Earth scientists for failure to predict a quake. It is unclear how this will affect Italy's future ability to deal with geohazards, as it is likely that scientists will refuse to participate in programs that might result in prosecutions.