Lizards often have more restricted ranges and climatic tolerance than Mammals, making them useful in the study of ancient climates. Fowlkes Cave is a sinkhole in the Chihuahua Desert, roughly 10 km to the north of Kent in Cuthbertson County, Texas. It has a well documented and studied fauna of Late Pleistocene Mammals, but also has a selection of Lizard fossils from the same period, which are less well studied.

In a paper published in The Southwestern Naturalist in December 2012, Dennis Parmley and Jessica Rackett Bahn of the Department of Biological and Environmental Science at Georgia College and State University, describe a series of Lizard remains from the Late Pleistocene of Fowlkes Cave.

The first Lizard species recorded is Phrynosoma modestum, the Roundtail Horned Lizard. Parmley and Racket Bahn report the presence of 25 right dentaries, 33 left dentaries, 36 parietals, 26 frontals, 91 squamosals, 11 surangulars and 5 jugals from the cave, many of which are very well preserved and unambiguous in origin. 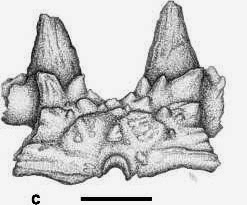 Phrynosoma modestum is still found in parts of Texas, New Mexico, Arizona, Colorado and Mexico. The species prefers semi-arid habitats with sparse vegetation. It feeds on Harvester  and Honeypot Ants.

The second species recorded is Phrynosoma cornutum, Texas Horned Lizard or Horned Toad. Parmley and Racket Bahn report the presence of 1 left dentary, 1 right dentarys and 3 pariaetals from the cave. 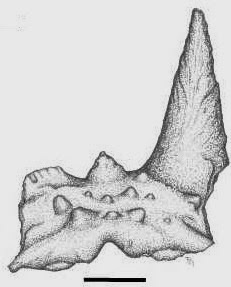 Phrynosoma cornutum is still found in Texas, New Mexico, Arizona, Colorado and Mexico, and has been introduced to North and South Carolina, Georgia and Florida. There are also populations in Louisiana and Arkansas, though it is unclear if these are native or introduced. These Lizards also primarily eat Harvester Ants, but also consume Termites, Beetles, Grasshoppers and other insects.

The next Lizard is an undetermined member of the Phrynosomatinae or Sceloperinae (alternate names for the same group, the Spiny Lizards). 70 left and 83 right dentaries of this Lizard were found.

The next Lizard is an indeterminate member of the genus Crotaphytus (Collared Lizards). 9 right and 10 left dentaries of this ;Lizard were found. These Lizards are found in in arid climates across southwestern North America.

The next Lizard listed is described as Eumeces cf. E. obsoletus, i.e. probably Eumeces obsoletus the Great Plains Skink. Two right dentaries of this Lizard were found at the locality. Eumeces obsoletus is found across the Great Plains of America, from Wyoming, Nebraska and Iowa south to Arizona, Texas and northern Mexico. It prefers moister environments, such as irrigation ditches, and reaches altitudes of 1900 m in the southern extent of its range, though it reaches lower altitudes further north.

The next Lizard listed is an undetermined member of the genus Cnemidophorus, Whiptail Lizards. Eight right and six left dentaries of this Lizard were found. Members of this genus are found across southern North America, Central America and northern South America, as well as parts of the Caribbean.

All of these species, as best can be identified, are present in the area around the cave, suggesting that the climate in the Late Pleistocene was greatly different than it is today, though studies of other taxa present, notably Frogs and Snakes have suggested that it may have been a little moister, or at least closer to water, at this time.