Predation of Freshwater Mussels in the Early Cretaceous of Spain.

Unionoid Bivalves (Freshwater Mussels) appeared before the beginning of the Triassic, and became the dominant freshwater invertebrates in many freshwater ecosystems early in the Mesozoic, particularly in the Northern Hemisphere. Like marine Molluscs they are subject to a variety of predation, but this has not been widely studied in the fossil record.

In a paper published in the January 2013 edition of the journal Lethaia, David Bermúdez-Rocha of the Universidad de Cantabria, Graciela Delvene of the Museo Geominero at the Instituto Geológico y Minero de España and Ignacio Ruiz-Omeñaca of the Museo del Jurásico de Asturias and the Departamento de Geología at the Universidad de Oviedo describe a series of shells of the Freshwater Mussel Protopleurobema numantina from the Early Cretaceous of the Cameros Basin in northern Spain, showing rounded depressions which they interpret as signs of predation damage. 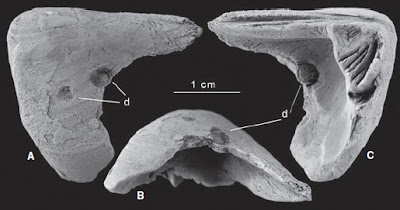 Bermúdez-Rocha et al. interpret this damage as having been caused by crushing by the tooth of a large vertebrate, and furthermore suggest that these teeth much have been blunt and conical in profile to have produced indentations of this profile. The beds that produced the shells also produce fragmentary remains of Ganoid Fish, however the teeth of these are two small and tightly packed to have caused this damage, suggesting that a non-Fish predator was probably responsible. Theropod Dinosaurs typically have sharp teeth with a flattened profile, which would again be unlikely to produce damage to shells in this way.

Crocodyliforms have blunted, conical teeth, and a number of species are known to have been present in the Cameros Basin during the Early Cretaceous, with one species, Goniopholis, producing teeth of the right proportions to cause the shell damage seen. Small Bivalves are not an obvious prey item for a large Crocodyliform, however several modern species, including the Chinese Alligator (Alligator sinensis), the Mugger Crocodile (Crocodylus palustris) and the Gharial (Gavialis gangeticus) are known to seek out and consume Freshwater Bivalves when other prey is scarce, and Bermúdez-Rocha et al. suggest that similar behavior in a Jurassic Crocodyliform would not be surprising. 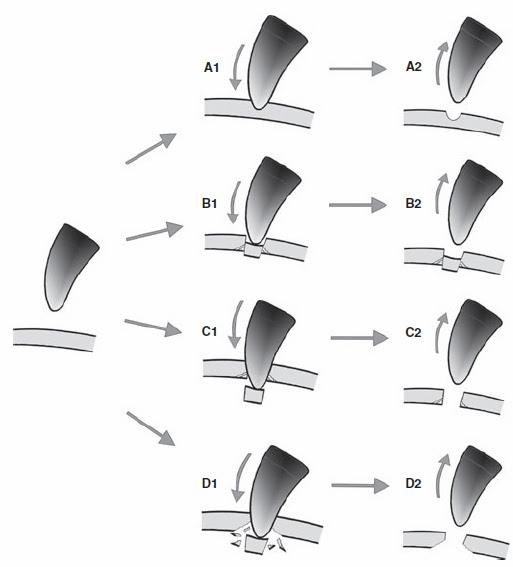