Heavy metal extraction is a notorioulsy high pollution risk industry, as the metals are highly toxic to most forms of life, and most extraction techniques involve extracting them from ores using acids or other toxic materials (e.g. mercury), creating a toxic sludge, which, if it escapes into the environment, can prove extremely harmful to waterways and agricultural land, as well as presenting a high risk to human health. This has led to a great deal of interest in bioremediation techniques which use micro-organisms to extract the metals from ores, and a consequent search for suitable organisms.

In a paper published in the journal PLoS One on 4 December 2012, Honghui Zhu, Jianhua Guo, Meibiao Chen and Guangda Feng of the Guangdong Open Laboratory of Applied Microbiology at the State Key Laboratory of Applied Microbiology and Qing Yao of the South China Agricultural University, describe a new species of cadmium tollerant Bacterium from the Dabaoshan Mining Area in Guangdong Province, China.

The new species is placed in the genus Burkholderia, several species of which have proved to be highly tollerant to heavy metals, and useful in bioremediation, and have apparently evolved several different biochemical methods for doing this, and is given the specific name dabaoshanensis, meaning 'from Dabaoshan'. 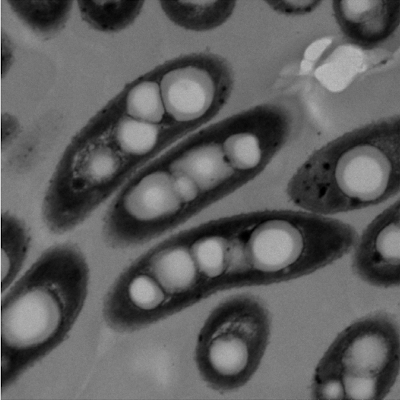 
Burkholderia  dabaoshanensis is a rod-shaped, non-spore-forming gram negative Bacterium, 1.3-1.8 µm in length and 0.5-0.6 µm in diameter. It is aerobic (i.e. respires oxygen) and weekly motile (it can move itself, though not very well). It was found living in highlt acidic (pH2-4) soils contaminated with heavy metals, particularly cadmium. In the laboratory it was able to grow and form colonies in media of pH 4-9 (sugesting that at pHs of less than 4 it survives but remains dormant), at temperatures of 5-40˚C, but did best at an optimum condidions of pH6 and 30˚C. It is resistant to streptomycin, kanamycin, ampicillin and cefetamet.