The Ursid Meteors are expected to peak on 22 December this year, with the shower being potentially visible to some extent between 17 and 26 December. The extent of the shower is variable, some years producing over 100 meteors per hour at its peak, others less than 10. The meteor shower gets its name from the constellation of Ursa Minor, in which it appears to originate. 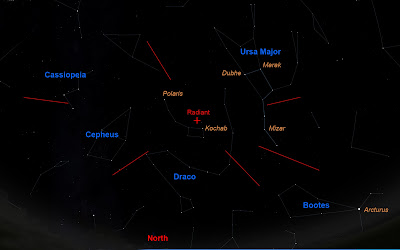 The point of origin of the Ursid Meteors. Jodrell Bank Center for Astrophysics.


The Ursid Meteor Shower is associated with the comet P8/Tuttle, which orbits the Sun every 13.6 years, on an orbit that brings it slightly outside  the orbit of the Earth then out to slightly beyond the orbit of Saturn. Comets are composed largely of ice (mostly water and carbon dioxide), and when they fall into the inner Solar System the outer layers of this boil away, forming a visible tail (which always points away from the Sun, not in the direction the comet is coming from, as our Earth-bound experience would lead us to expect). Particles of rock and dust from within the comet are freed by this melting (strictly sublimation) of the comet into the tail and continue to orbit in the same path as the comet, falling behind over time. 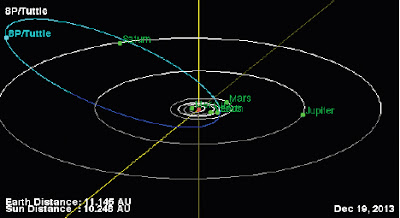