Asteroid 2013 XY20 passed by the Earth at a distance of 5 976 000 km (slightly over 15.5 times the distance between the Earth and the Moon), a little after 1.35 pm GMT on Monday 16 December 2013. There was no danger of the Asteroid hitting us, and had it done so it would have presented little threat. 2013 XY20 is estimated to be between 14 and 45 m in diameter, and an object of this size would be expected to break up in the atmosphere between 27 and 9 km above the ground, with only fragmentary material reaching the Earth's surface. 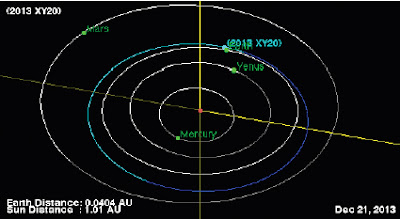 2013 XY20 was discovered on 11 December 2013 (five days before its closest pass of the Earth) by the University of Arizona's Mt. Lemmon Survey at the Steward Observatory on Mount Lemmon in the Catalina Mountains north of Tucson. The designation 2013 XY20 implies that the asteroid was the 524th object discovered in the first half  of December 2013 (period 2013 X).

While 2013 XY20 occasionally comes near to the Earth, it does not actually cross our orbital path. It has an almost circular 441 day orbit that takes it from 1.01 AU from the Sun (1.01 times the distance at which the Earth orbits the Sun), slightly outside our orbit, to 1.26 AU from the Sun, still considerably inside the orbit of the planet Mars, so unless an encounter with another body causes it's orbital path to alter in a very specific way (highly unlikely) there is no chance of it hitting the Earth. As a Near Earth Object that remains strictly outside the orbit of the Earth it is classed as an Amor Family Asteroid.