Five members of the same family were killed when a landslide hit their home in Rose Bank on the west coast of the Caribbean island of St Vincent in the early hours of the morning on Christmas Day (25 December) 2013. The identities of the dead have not been reported, but are said to include a girl of 18 and a boy of two. The incident happened following several days of heavy rain. Landslides are a common problem after severe weather events, as excess pore water pressure can overcome cohesion in soil and sediments, allowing them to flow like liquids. Approximately 90% of all landslides are caused by heavy rainfall. 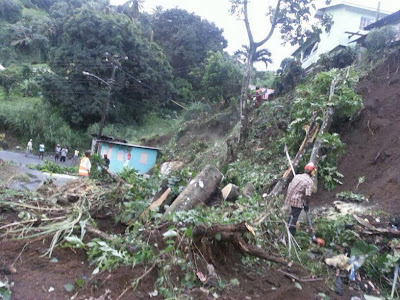 The rain system is associated with a tropical depression that has been sitting over St Vincent and the Grenadines for several days. Two people are known to have died in separate incidents, one in Byera on the east coast of the island and one in Vermont on the southwest coast. At least three more people are missing and the death toll is expected to rise. Several major roads on the island have become impassible, and part of the Milton Cato Memorial Hospital has been flooded, as has the  E. T. Joshua Airport. Several other Caribbean nations have also been affected, particularly Dominica and St. Lucia.