Evidence of Leprosy in from an early Anglo Saxon grave from Essex, England.

Leprosy is caused by the Bacterium Mycobacterium leprae; it is fatal, incurable without modern antibiotics and causes serious disfigurations prior to death, making it a particularly feared disease in areas where it is prevalent. The disease is thought to have originated in East Africa and was well known in the ancient Middle East, though medical diagnosis was not a precise science to the ancients, and all descriptions of Leprosy cannot be assumed to be the same disease. However the presence of Leprosy in burials from the second century BC onwards in Egypt and the first century AD onwards has been confirmed. The disease reached Europe in the Early Medieval period and remained for many centuries, however despite being carried to many corners of the globe by European settlers it died out in Europe prior to the development of modern medicine, making historical records of Leprosy in Europe also somewhat unreliable.

The Great Chesterford site was first excavated in 1953-54 by Vera Evison on behalf of the Inspectorate of Ancient Monuments, after the remains were disturbed by gravel extraction in the area. The grave contained a young adult male orientated east-west with the head towards the west, buried in a slightly flexed position, with the hands placed on the left shoulder. The bones of the face and part of the left arm were missing, but otherwise the level of bone preservation was good. Some grave goods were present, including a spear, a knife and a buckle. The remains are now housed at the Department of Archaeology at the University of Southampton. 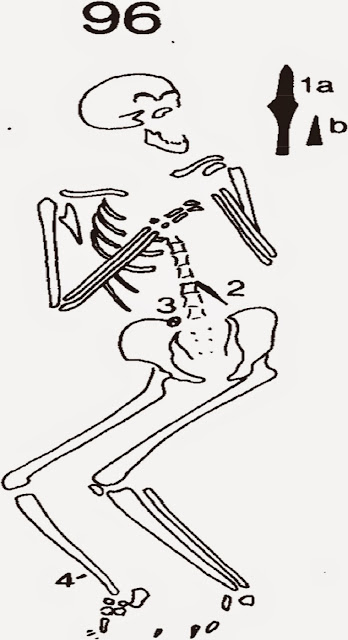 Grave sketch of inhumation 96 showing positioning of the skeleton and location of grave goods. (1 a) Spearhead, angular, split socket with transverse rivet. Length 27.4 cm. (b) Conical ferrule, two decorative grooves. Length 10.2 cm. (a) and (b) were found before the grave was identified, about 8cm above floor of grave to left of skull. (2) Knife, slender, type 1. Length 12cm. Position: Point up under vertebrae at leftwaist. (3) Oval buckle loop and tongue. Transverse ribbing on the loop visible near the tongue. Diameter 2.5 cm. Position: Top right of pelvis. (4) Bronze shoelace tag, flat band folded and riveted together, twodecorative lines. Length 2.1 cm. Position: Above right ankle. Council for British Archaeology in Inskip et al. (2015).

The skeleton shows a number of symptoms which may be indicative of Leprosy, including new bone growth on left and right tibiae and fibulae, with remodelled lamellar bone and nodular growth suggesting multiple periods of new bone growth and healing. The left tibia the infection appeared particularly severe, with porous and disorganized woven bone on the medial malleolus and on the medial and anterior aspect of the distal diaphysis, with lessons that appear to have been suffering active infection at the time of death. A small patch of remodelled bone was also present on the right ulna. The right foot is heavily remodelled, with signs of infection and bone destruction on thetarsometatarsal joints and the second, third and fifth metatarsals. The fourth right metatarsal is missing, and it is unclear if this occurred before or after death. On the left foot the first and second metatarsals show signs of infection with lesions that were probably active at the time of death. 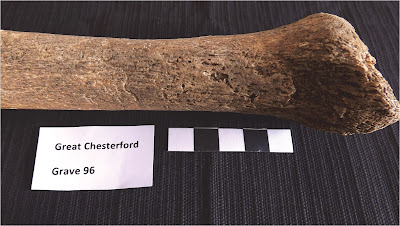 Left tibia of GC96 showing evidence of inflammatory pitting and presence of both woven and remodelled lamellar bone on the subperiostealshaft. Inskip et al. (2015).

All of this is indicative of Leprosy, but not in itself sufficient for diagnosis, since the bone pathology is caused by the immune system’s reaction to infection rather than the infection itself. The most diagnostic bones for Leprosy are those of the face, which do show a pattern of infection unique to the disease, however these are missing in the Great Chesterford remains. Thus the remains are currently regarded as one of the earliest possible recorded cases of Leprosy from the UK, along with several other sets of early Anglo Saxon remains with indicative but not diagnostic symptoms of infection.

Inskip et al. first re-examined the bones and were able to confirm that the remains were male from the shape of the pelvis, and between about 25 and 35 years old at the time of death, based upon the fused epiphysis of the long bones (which does not occur until after growth has stopped) and the low level or wear on the teeth. Radiocarbon data suggests that the remains were buried between AD 415 and AD 545.

Next they were able to extract DNA from the infected bones. These DNA samples tested negative for the Bacterium Mycobacterium tuberculosis, which can also cause bone lesions, but positive for the Mycobacterium leprae strain 3I. This lineage has previously been recorded from Medieval graves in the UK, Denmark and Sweden; it is no longer found in Europe, but is present in the southwest United States, where it was presumably introduced by British settlers. Since the early Anglo Saxon settlers in England originated in Denmark and northern Germany, it is also likely that they brought this strain of Leprosy to the UK. The bones also produced traces of mycolic and mycocerosic acids, which are considered to be diagnostic of Leprosy. 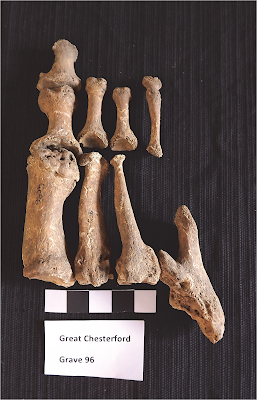 Inskipet al. also studied strontium and oxygen isotopes from the tooth enamel of the skeleton. These become fixed at about puberty, reflecting the isotopic content of the water consumed at this time, unlike bone where the isotope content varies with water consumed throughout the life of the individual, and are often used not just in archaeology but in the identification of modern remains by forensic scientists, in those working with war graves and similar sites. Neither the strontium or oxygen isotope ratios were consistent with the area around Great Chesterford, and while the strontium isotope ratios could reflect an origin from a wide area of southern England, the oxygen isotope levels could only have come from northeast Scotland or the region between the coast and the eastern edge of the Pennines – where the strontium isotope levels are different. Since both the oxygen and strontium isotope levels must match, this rules out an origin in the UK.

The oxygen isotope levels are also consistent with southern Norway, eastern Denmark, eastern France and central Germany. The strontium isotope ratios are inconsistent with those from southern Norway, but consistent with those from eastern Denmark. Data on strontium isotope ratios is not available for central Germany or eastern France. Thus the isotope data suggests the man grew up somewhere on the continent rather than in the UK, but insufficient data is available to say exactly where. This appears to support the idea that Leprosy could have been brought to the UK by early Anglo Saxon settlers. 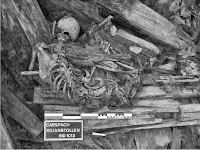 A preserved bladder stone from a medieval burial in Gdańsk, Poland.

Biological organisms often produce a variety of mineralized tissues, such as bones, teeth and shells... 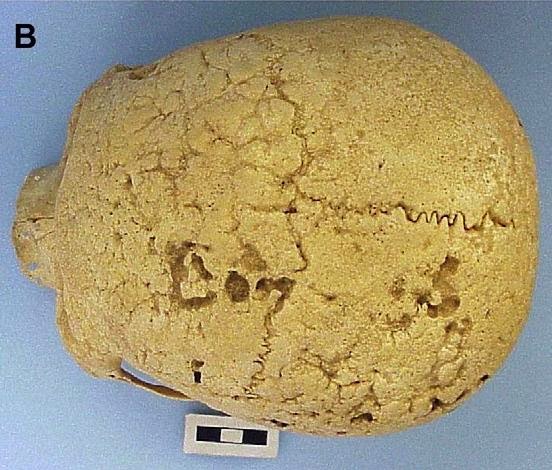 Bone infection in a Pre-Columbian skull from south Jamaica.
The Taíno people are thought to have colonized the Caribbean Islands by island hopping from northern South America from about 500 BC onwards, reaching Jamaica by around 645-898 AD. They were skilled agriculturalists, introducing crops such as Cassava and Maize from South America and changing the...
Follow Sciency Thoughts on Facebook.