A student at Atma Jaya University in Yogyakarta is believed to have died after falling into the crater of Mount Merapi in Central Java on Saturday 16 May 2015. Eri Yunanto, 21, who was studying at the university's Technical Industry School had ascended the volcano, which is a popular tourist spot, with a group of friends, when he lost his footing while taking a photograph and toppled into the crater. Investigators from the Indonesian National Search and Rescue Agency have located what they believe to be Mr Yunanto's body about a hundred meters bellow the rim of the crater, but were unable to enter the crater itself due to smoke and poisonous gas. The Yogyakarta-based Geological Disaster Technology Research and Development Center has issued a warning about unsafe conditions on the mountain and all trekking activities have been suspended while an investigation into the incident is carried out. 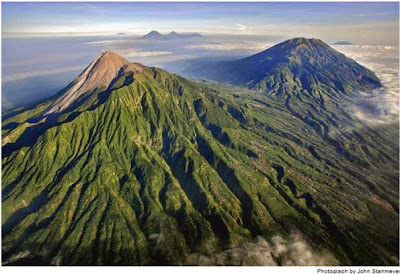 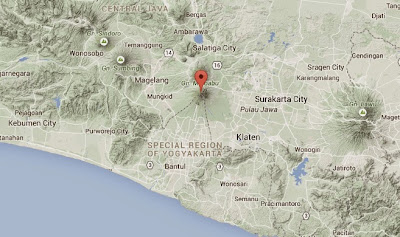 
The Indo-Australian Plate, which underlies the Indian Ocean to the south of Java, is being subducted beneath the Sunda Plate, a breakaway part of the Eurasian Plate which underlies Java and neighbouring Sumatra, along the Sunda Trench, passing under Java, where friction between the two plates can cause Earthquakes. As the Indo-Australian Plate sinks further into the Earth it is partially melted and some of the melted material rises through the overlying Sunda Plate as magma, fuelling the volcanoes of Java and Sumatra. 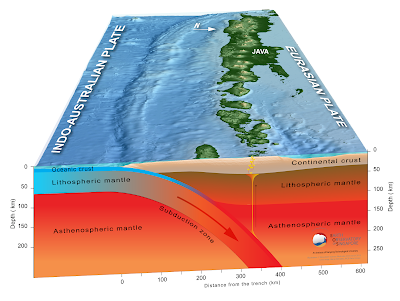 Landslide triggers explosion at Indonesian geothermal energy project, killing at least four.
Four people have been confirmed dead and another nine are missing following an explosion on a...

Eruptions on Mount Slamet.
Indonesian authorities have raised the alert level on Mount Slamet, an active volcano in Central Java, to three (out of a possible four), after a series of eruptions this week. The volcano began a new eruptive cycle in March, but has become notably more active over the...

Eruptive activity on Mount Merapi, Java.
Mount Merapi, a volcano in central Java considered to be one of Indonesia's most active, underwent a brief outburst of volcanic activity between 1.12 and 1.16 pm local time (6.12 and 6.16 am GMT) on Thursday 27 March 2014, during which it generated a number of...