Philistine and Hellenistic remains from the Iron Age city of Ashdod-Yam on the southern Mediterranean coast of Israel.

The Philistine Kingdom of Ashdod fell under the domination of the Assyrian Empire in the eighth century BC. While this brought some advantages to its people, including access to a large trade network within the empire, it also led to taxes by the Assyrians, which appears to have been resented by the people of Ashdod. In 713 BCE the King of Ashdod, Azuri, refused to pay tribute to the Assyrians, leading the Assyrian Emperor, Sargon II, to replace him with his brother, Ahimiti. However Ahimiti was overthrown by a commoner, Yamani, who led a full scale rebellion against the Assyrians. In 712/11 BCE an Assyrian army marched against Ashdod, which surrendered without a fight. Yamani fled to Egypt, the major rival of Assyria for political domination at the time, but was returned to Assyria ‘in fetters’; his fate is unknown, but is unlikely to have been pleasant.

The Assyrians record the destruction of Ashdod following the uprising, but also subsequently recorded the sending of governors to the city and the receiving of tribute from subsequent Kings of Ashdod. The Greek history Herodotus records the conquest of Ashdod by the Egyptian Pharaoh Psammetichus I around 635 BCE and the Persians record dealings with the King of Ashdod in 598 BCE.

In the 1960s archaeologist Jacob Kaplan carried out a series of excavations on behalf of the Museum of Antiquities of Tel Aviv-Jaffa at Ashdod Yam (Ashdod-upon-Sea) a walled settlement on the coast to the northwest of the City of Ashdod, thought to have been an artificial harbour (this area of coast lacks natural harbours) which served the city and which would have been a major economic asset. Kaplan exposed substantial defences at Ashdod Yam, comprising a 3-4.5 m thick mud-brick wall surrounded by large earthen ramparts, which he interpreted as defences thrown up by the Ashdodians under Yamani, in anticipation of the Assyrian Invasion. He also recovered a modest amount of pottery from the site, of both local and Phoenician origin.

However subsequent scholars have argued that these defences are too well made to have been hurriedly assembled in response to an anticipated invasion, and suggested instead that after the fall of Ashod itself the Assyrians moved the capitol of the kingdom to the more useful port of Ashdod Yam, with Ashdod itself subsequently being abandoned or much reduced in importance; subsequent records to Ashdod would therefore refer to Ashdod Yam. Under this scenario the defences at Ashdod Yam would have been built by the Assyrians, either after the fall of Ashdod, or as part of a restricting of the kingdom to suit their own economic interests before the rebellion – a reorganisation which may have sparked the rebellion.

However excavations at Tel Ashdod (the remains of the City of Ashdod) by the Israel Antiquities Authority have revealed what appears to be an Assyrian administrative palace dating from after the reconquest, suggesting that Ashdod was never destroyed, and that records of its destruction were in fact Assyrian hyperbole.

In 2013 a team of archaeologists under Alexander Fantalkin of the Department of Archaeology & Ancient Near Eastern Cultures at Tel Aviv University began a series of new excavations at Ashdod Yam. It was originally intended to carry out further excavations in 2014 in collaboration with the Institut für Alttestamentliche Wissenschaft of the University of Leipzig, however these were abandoned due to a deteriorating security situation associated with the Israel-Gaza conflict. In a paper published in the journal Skyliss in February 2015, Alexander Fantalkin describes the results of the 2013 excavations.

LIDAR image of Ashdod-Yam. Kaplan’s sections are visible along the perimeter of fortifications. SEE Advanced Mapping Systems and SolutionsLtd in Fantalkin (2015).

The Ashdod Yam site is quite extensive, though the northern part of the area is known to be of medieval origin, and has been the subject of separate investigations by the Israel Antiquities Authority, which have produced remains from the Early Islamic Period and extensive fortifications associated with the Crusader’s Period. The site has however been abandoned for some centuries, and is covered by an extensive dune field. Fantalkin’s team excavated two areas at Ashod Yam, an area within the city walls interpreted as a citadel by Kaplan, and the section of walls previously excavated by Kaplan.

The area within the walls yielded three clusters of buildings, however these all appear to have been Hellenistic (Greek) origin rather than Philistine or Assyrian, and therefore presumably date from a later period than the walls. 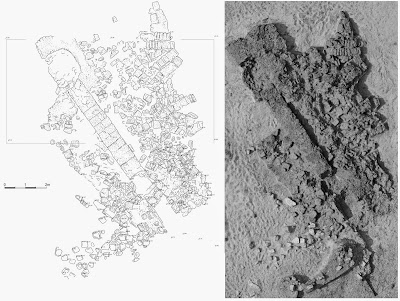 The first cluster of buildings from the site within the walls of Ashdod Yam. Plan drawing to the left and photograph to the right. Drawing by Slava Pirsky, photograph by Pascal Partouche of Skyview Photography and Philip Sapirstein, in Fantalkin (2015).

The first cluster of buildings comprises mud brick structures made from bricks measuring approximately 39 cm by 39 cm by 10 cm, preserved up to the fifth course. The structure was built directly onto sand without foundations, and appears to have collapsed suddenly, leading Fantalkin to suggest an Earthquake may have been responsible. Some of the bricks contain pottery shards of Hellenistic origin.

The first cluster of buildings, seen from the northeast. Pavel Shrago in Fantalkin (2015).

The second cluster of buildings comprise bricks of a similar origin to those of the first cluster, but are built on foundations made of local rock, roughly one meter wide and half a meter deep. These foundations have been partially excavated for their stone at some point, with an excavation trench running across the site from southwest to northeast. As well as the bricks this site yielded a small amount of Hellenistic pottery and coins, as well as a tabun installation (bread oven). Again these buildings appear to have been destroyed suddenly, by an apparent Earthquake. 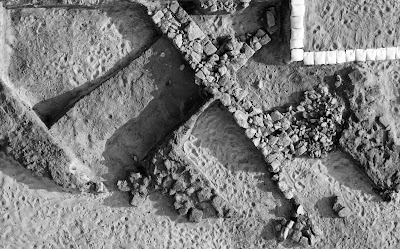 The second cluster of buildings, seen from above. Pascal Partouche, Skyview Photography in Fantalkin (2015).

All of these structures appear to have been built upon a thick layer of pure sand. This implies that the city was abandoned for some time prior to being re-occupied by the Greeks, which is mysterious as the Persians, who ruled the area prior to its conquest by the Greeks under Alexander the Great, have left remains at Tell Ashdod as well as leaving records referring to the area; why they should have ignored the main port of the area is unclear.

A few shards of pottery of possible Persian origin have been excavated from the Hellenistic structures, as well as some coins of interest. The first is a silver Philistine coin in the Athenian style (i.e. showing Greek influence, but manufactured before the Greek conquest) manufactured in the late fifth or early fourth century BCE, probably at Ashdod. In addition there are a few bronze Hellenistic coins from the city of Side in Pamphylia. 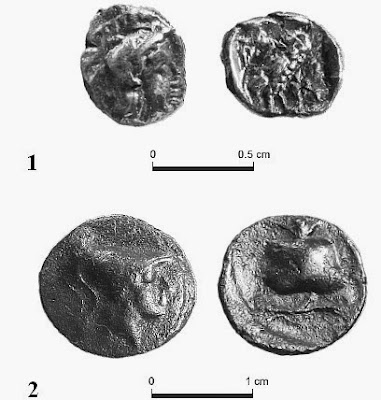 Coins from Ashdod Yam; (top) a silver coin of Philistine manufacture and (bottom) a bronze coin from Side. Pavel Shrago in Fantalkin (2015).

The second area of investigation was the site previously investigated by Kaplan in the 1960s. Here Fantalkin’s team excavated down to the foundations of the wall, which was four meters wide and made of hamra mud-bricks (expand), supporting a wall five meters in height. The bricks were tightly fitted, measuring 55 cm by 35 cm 15 cm, and any gaps in the wall were infilled with mud to present a uniform façade.Fantalkin interprets this structure as being Philistine in origin rather than Assyrian, though this does not preclude the Assyrians using the site after its walls had been built. 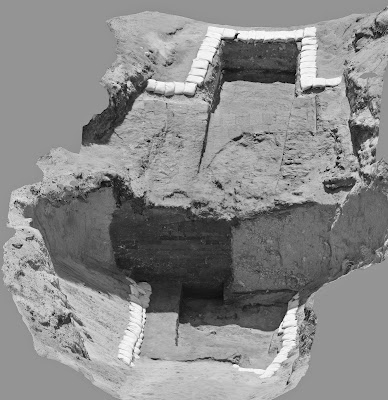 Part of the excavated wall of Ashdod Yam. Philip Sapirstein in Fantalkin (2015).

The outer earthworks were found to contain a favissa (underground pool at a temple) with a number of ceramic items thought to be Philastine cultic objects. These include six chalices and a bowl; one of the chalices being almost complete after reconstruction, the other items being poorly preserved. Similar chalices from other Philistine sites have yielded traces of lipids, notably myristic acid, isopropyl myristate and other myristate derivatives (i.e. Nutmeg derived chemicals), which have been explained as the traces of oily hallucinogenic substances burned in religious ceremonies. The Ashod Yam material has also yielded organic residues, though this has a different composition, which has yet to be fully interpreted. Fantalkin  suggests that this may be indicative of a settlement with a mixed population, with hybrid cults emerging, burning foreign substances in Philistine vessels. 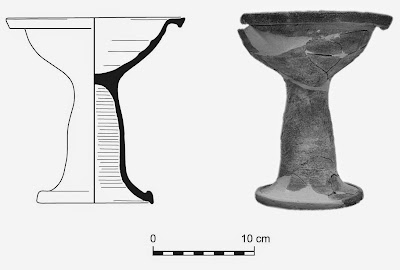 A number of boreholes were also drilled around the site and investigated by Simona Avnaim-Katav from the Leon Recanati Institute forMaritime Studies at the University of Haifa. These yielded a variety of marine microfossils and Mollusc remains, as well as a mixture of marine sands, clays and pebbles, all from some way above mean sea level, and above identifiable Pleistocene horizons. Whilst these are preliminary borings, that have not produced identifiable fossils or dates, Fantalkin suggests that they may be indicative of a tsunami event, possibly connected with the Earthquake that apparently destroyed the Greek settlement.

The death of Ramesses III.
Ramesses III is ruled Egypt from about 1186 to about 1185 BC. He was the second pharaoh of the Twentieth Dynasty, and generally considered the last significant monarch of the Young Kingdom. He ruled during a time of increasing political instability in the eastern... 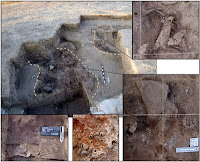 20 000 year old stone huts from Kharaneh in Eastern Jordan.
The earliest stone structures are generally associated with the Epipalaeolithic Natufian culture of Southwest Asia (the term Epipalaeololithic applies to cultures outside the extent of the last glaciation that showed the same level of technology as Mesolithic cultures in...
Follow Sciency Thoughts on Facebook.