Cycad’s are of particular interest to botanists and horticulturalists due to their unique evolutionary heritage; they are Gymnosperms (non-flowering Seed Plants), members of the group that includes Conifers and Ginkos, but among the closest non-flowering relatives of the Angiosperms (Flowering Plants). They large attractive plants, superficially resembling Palms, but producing large and often brightly coloured strobili, structures intermediate between cones and flowers; these are often pollinated by Beetles, and in particular Weevils. This combination of botanical interest and physical attractiveness has made Cycads popular with plant collectors for many years, however they are slow growing and difficult to cultivate artificially, leading to excessive collecting of almost all species within the group, which together have led to declines in many populations despite attempts at conservation measures.

The Cycad Encephalartos ferox is found in northeastern KwaZulu-Natal and in the provinces of Maputo, Gaza and Inhambane in Mozambique. It is a formerly widespread species now considered Near Threatened under the terms of the International Union for the Conservation of Nature’s Red List of Threatened Species, due to collecting for use in horticulture, damage to its natural environment by fires and conversion of its habitat to agricultural land or (particularly in coastal areas) spreading urban development. It is also used in traditional medicine in parts of Southern Africa.

As with many species of concern to conservationists, population structures of Encephalartos ferox are largely unknown. This is of concern because widespread species can hide considerable diversity, with populations adapted to local conditions that will become less fit if they interbreed and in extreme cases cryptic species, which resemble one-another but are genetically distinct and reproductively isolated.

In a paper published in the journal Phytotaxa on 1 April 2015, Philip Rousseau of the H.G.W.J. Schweickerdt Herbarium at the Department of Plant Science at the University of Pretoria, Pieter Vorster of the Department Botany and Zoology at the University of Stellenbosch, Abilio Afonso of the Instituto de Investigação Agrária de Moçambique and Abraham Van Wyk, also of the H.G.W.J. Schweickerdt Herbarium, describe the results of a genetic study of Encephalartos ferox across its range, as a result of which the species is divided into two subspecies.

The majority of the population, including all the South African plants, as well as those in Maputo (where the species is most abundant) and Gaza Provinces in Mozambique as well as most of the plants in Inhambane Province, belonged to a single subspecies. Rouseau et al. name this Encephalartos ferox ferox, meaning ‘fierce’. 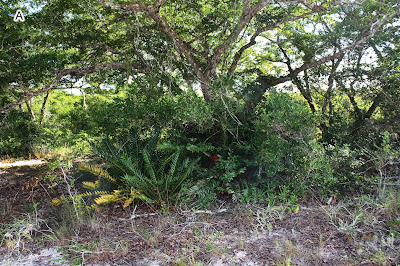 Encephalartos ferox ferox. Plants in habitat at its northernmost distribution; associated with forest on coastal dunes, often in the shade of taller trees and shrubs. Philip Rousseau in Rousseau et al. (2015).

Encephalartos ferox ferox has stems of up to 1.5 m in length, largely buried beneath the ground. These are surrounded by a rosette of leaves up to 2680 mm in length, subdivided into spiny petioles (leaflets). The strobili are reddish orange in colour, with (male) microstrobili reaching 960 mm in height (usually less than half this) and (female) megastrobili reaching 575 mm in height. The subspecies is found in lowland woodland and on coastal dunes, usually growing in the shade of larger plants.

The second subspecies is known only from two populations separated by about a kilometre in northern Inhambane Province (the precise location is not given due to concerns about illegal collecting). This subspecies is named Encephalartos ferox emersus, meaning ‘standing above’, in reference to the plant’s growth habit, with stems standing above the ground rather than buried as in Encephalartos ferox ferox. 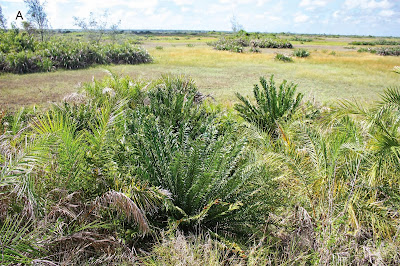 Encephalartos ferox emersus has emergent stems up to 1500 mm in height, surrounded by rosettes of leaves up to 2080 mm in length, these being divided into spiny petioles. The (male) microstrobili are yellow and reach up to 500 mm in height, (female) megastobili are also yellow and reach up to 480 mm. The Cycads were found growing on a floodplain covered by savannah grasslands with scattered Palms. They were growing on large circular mounds (former Termite hills) which stood above the floodplain. 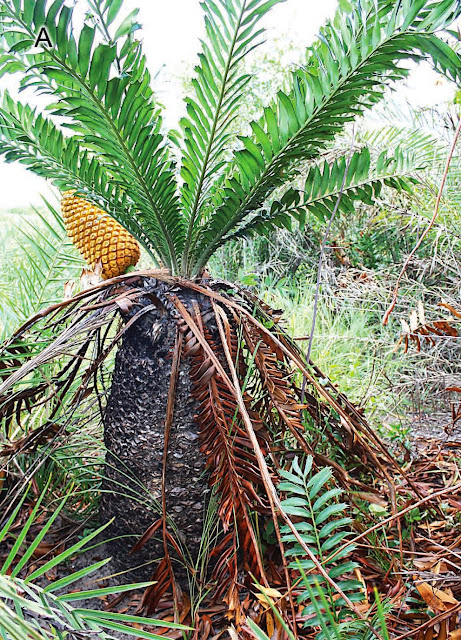 Encephalartos ferox emersus is found at two known locations, with a total of about 70 mounds each with about 15 plants representing a total population of slightly over a thousand. The area where they were found has no conservation status, and during the time it took to carry out the survey several plants were removed and relocated to tourist lodges in nearby towns. There was a clear preference for large mature individuals which clearly did not do well after being relocated. The very limited size of this population and in particular the small area which it is restricted to poses a risk that the entire population could be wiped out by a single random event. As such Rousseau et al. recommend that the subspecies be listed as Critically Endangered under the terms of the International Union for the Conservation of Nature’s Red List of Threatened Species. 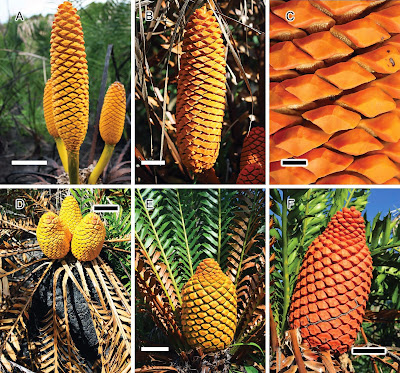 Trying to save the Sinkhole Cycad.
Cycads are an ancient group of Gymnosperm Plants thought to be among the closest surviving relatives of Flowering Plants. They originated in the Palaeozoic, and were once one of the most abundant plant groups on Earth, but were almost wiped out at the end of...