Oomycete Chromists are Fungus-like micro-organisms which cause a wide variety of infections in plants, such as Potato Blight and occasionally animals, such as White Rots in aquarium Fish. It is also likely that many live non-pathogenic lives in soil and water ecosystems, though the ecology of the group is not well understood outside species that cause problems for agriculture. The group were formerly thought to be related to Fungi, but genetic studies have shown them to be more closely related to Brown Algae and Diatoms, and in addition has revealed a great deal of diversity within the group, with species formerly classified together on the basis that they cause similar infections now known to be only distantly related.

In a paper published in the journal Phytotaxa on 10 April 2015, BevanWeir, Elsa Paderes and Nitesh Anand of Landcare Research in Auckland, New Zealand, Janice Uchida of the University of Hawaii at Manoa and ShaunPennycook, Stanley Bellgard and Ross Beever, also of Landcare Research, describe two new species of Oomycete Chromists from New Zealand and Hawaii and Côte d’Ivoire.

Both the new species are considered to be members of ‘Phytophthora Clade 5’, which is to say the fifth group assigned to the genus Phytophthora with a common ancestry closer to one-another than to other members of the genus. This clade has until now contained only two species, Phytophthora castaneae, which infects Chestnuts in Japan and East Asia, causing a form of Trunk Rot, and Phytophthora heveae, which has been shown to cause a variety of infections in a wide range of plants.

The first new species described is named Phytophthora agathidicida, meaning ‘killer of Agathis’ after the tree it infects, Agathis australis, the Kauri Tree of New Zealand. Kauris are Araucarian Conifers which formerly dominated many lowland areas in New Zealand. They are large, slow growing trees that were heavily harvested by European settlers in the nineteenth and early twentieth centuries and now have a very limited range, with old growth trees being found only in a few protected reserves and considerable effort being put into re-introducing the species across much of its former range. In 1971 it was noticed that Kauri Trees on Great Barrier Island in the Hauraki Gulf were suffering from a form of Collar Rot which caused bleeding lesions on the trunk and roots, yellowing of the foliage and thinning of the canopy, and occasionally tree death. 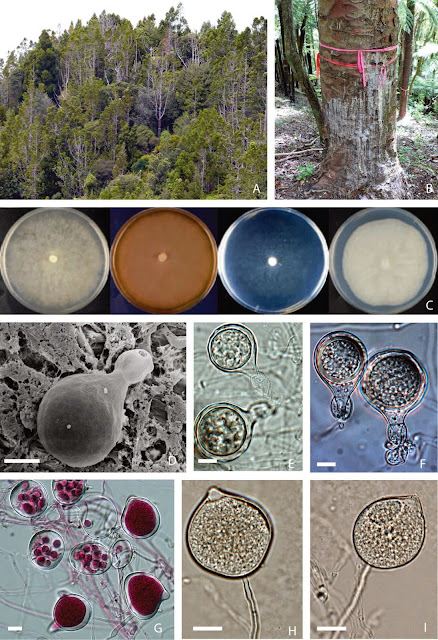 Colonies of Phytophthora agathidicida produce globoseoogonia 3-4 days after becoming established. These oogonia are 22.2-45.0 μm in diameter and have slightly stipuled walls. These contain oospores 19.8-35.0 μm in diameter, and can develop into new colonies (check).

The control of Kauri Dieback is currently being managed by the Ministry for Primary Industries along with the Department of Conservation, Auckland, Bayof Plenty, Northland and Waikato Regional Councils and the Tangata Whenua Roopu, with measures being taken to prevent the spread of the disease by foot traffic and infected trees being treated with phosphite.

The second new species described is named Phytophthora cocois, which derives from Cocos, the formal generic name for Coconuts. This was first detected as a disease of Coconut Palms on KauaiIsland, Hawaii, in the 1970s and has subsequently spread to the islands of islands of Oahu, Hawaii and Maui, then in the 1980s was discovered in Côte d’Ivoire in West Africa. The infection leads to rotting and early drop of the fruits and eventually death of the Palms. 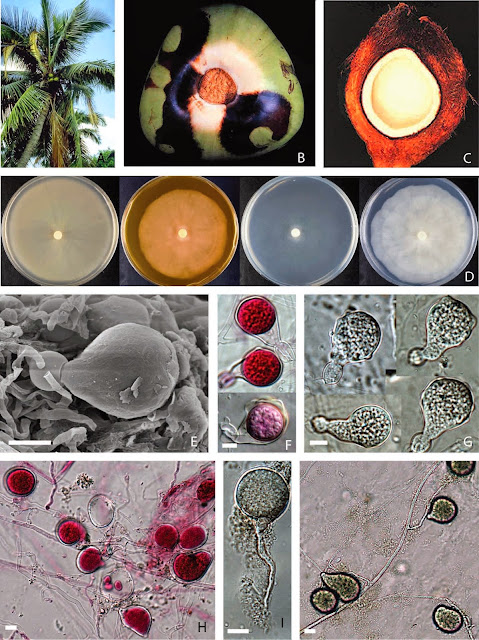 Phytophthora cocois. (A) Death of young Coconut fronds is the first common symptom of this disease. The young leaves wilt, dry, and are often bent or drooping into the tree canopy. (B) Premature loss of fruits is an early sign of disease. In later stages, fruit rots become more common. Infected green fruits have characteristic “green island” black to brown rots that expand irregularly and frequently form green areas surrounded by darkened diseased tissue. (C) Internal fruit rot. (D) Colony morphology of after 10-days incubation at 20°C in the dark. (Left to Right) Clarified V8 juice agar, MEA, CMA, and PDA.(E) Scanning electron micrograph of oogonia showing reflexed antheridium. (F–G) Oogonia showing some reflexed antheridia and mildly bullate oogonium ornamentation. (H) Differentiation of the cytoplasm within papillate sporangia into zoospores. (I, J) Sporangia shape variation. Scale bars are 10 μm. Weir et al. (2015).
Oogonia of Phytophthora cocois are globose and measure 22.3-35.0 μm in diameter, bearing spores measuring 19.8-29.7 μm. All measures to treat Coconut Palms once they become infected have failed, with the only means of controlling infection being to remove infected trees and fallen material from these trees as quickly as possible. In parts of Hawaii this has led to the effective clearance of large areas formerly inhabited by Coconut Palms. Phytophthora cocois appears to be host specific, and does not infect any other known host.

Three new species of Diatoms from the skin of a West Indian Manatee.                                      Most Marine Mammals are thought to host communities of Epizoic Algae living on their skins, though these have only been extensively studied in Cetaceans (Whales and Dolphins). Two closely related genera of... 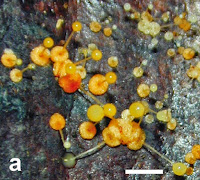 An unusual Pucciniomycote Fungus from Ecuador.

Pucciniomycote Fungi (Rusts etc.) typically produce microscopic fruiting bodies, though a few do produce larger sporocarps, typically with a basal spore producing area, with spores being expelled through some sort of structure above this. However the production of such bodies seems to be... 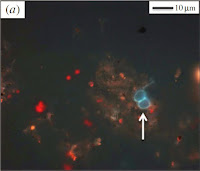 The role of aquatic polymers in transmitting disease in coastal ecosystems.

Toxoplasma gondii is a protozoan parasite that affects humans, and many other animals, across the globe. While it causes disease in many organisms, it reproduces only in Felids, particularly in Domestic Cats, with oocysts (egg-like cysts) being shed in Cat...
Follow Sciency Thoughts on Facebook.