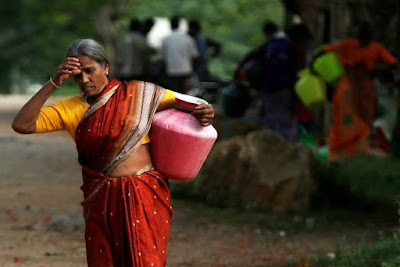 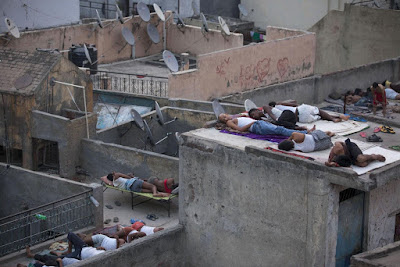 People sleeping on the roofs of houses in New Delhi on 29 May to escape heat trapped within the buildings. Tsering Topgyal/AP.

High temperatures are normal in India, and Indian Summer heat waves that claim many lives have been recorded on previous years. Prior to 2015 the highest number of casualties were recorded in 1997, when 1677 heat-related deaths were recorded, and the number of such deaths passed 1200 in 2012 and 2013. However the 2015 heat wave is exceptional not just in the number of deaths recorded but in how early in the year it has struck; the Indian Summer typically lasts from March to July, with temperatures climbing steadily across this period, and relief arriving with the onset of the Monsoon Season. The record-breaking temperatures and high number of casualties recorded in May is alarming as the temperature could potentially continue to rise for another two months, leading to many further casualties and severely stretching the Indian infrastructure, which is already suffering water shortages in many places, as well as power outages caused by a sharp rise in demand for air conditioning. 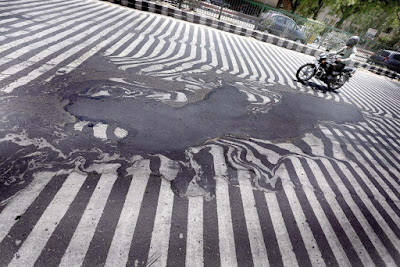 Heat stroke typically occurs when the human body is heated to over 40°C; such temperatures the body rapidly becomes too dehydrated to allow further sweating and the body looses its ability to thermoregulate, leading to disorientation and occasionally seizures, followed by  unconsciousness and eventual death. The best way to avoid this is to remain indoors during the hottest parts of the day, and to cover up with loose-fitting lightweight clothing and a hat when forced to venture outside. The worst affected people in all areas affected by the Indian heat wave have been the poorest members of society, particularly in urban areas where a large number of homeless people typically sleep in the open and have no access to shelter from the heat, and poor workers who cannot afford to take time off from jobs which require hard physical exertion in the direct sun. 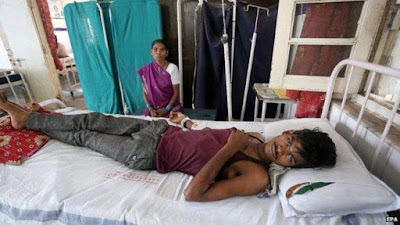 A man being treated for heat stroke in an Indian hospital. EPA.

The severity of the 2015 Indian heat wave appears to be related to a strong El Niño affect recorded over the southern Pacific Ocean this year. The El Niño is the warm phase of a long-term climatic oscillation affecting the southern Pacific, which can influence the climate around the world. The onset of El Niño conditions is marked by a sharp rise in temperature and pressure over the southern Indian Ocean, which then moves eastward over the southern Pacific. This pulls rainfall with it, leading to higher rainfall over the Pacific and lower rainfall over (amongst other places) India. This reduced rainfall during the already hot and dry Indian Summer leads to soaring temperatures, particularly over the eastern part of the country. Worryingly climatic predictions for the next century suggest that global warming could lead to more frequent and severe El Niño conditions, making such Indian heat waves a common occurrence.

At keast six dead as Cyclone Huhud hits Indian east coast.
Six people are known to have died and 350 000 people have been evacuated from coastal areas after Cyclone Huhud hit the city of...

At least seven dead following heavy rains in Guwahati, Assam.
At least seven people have died following torrential rainfall overnight in the city of Guwahati in Assam State, northeast India. Three people from one family were killed and another injured when a...