Rainforest resources in the diet of Late Pleistocene Humans from Sri Lanka.

Early modern Humans expanded from Africa around the globe in the Late Pleistocene, from about 125 000 years ago onwards. In doing so they adapted to a wide variety of environments, though some habitats are thought to have been more amicable to settlement by these early explorers than others. In particular the colonization of the world’s rainforests has been thought to be a late development, possibly not occurring till the early Holocene about 8000 years ago, due to the adaptations in diet and technology needed to settle in such an environment. However archaeological studies at Niah Caves in Borneo have suggested that people may have inhabited a rainforest environment there as early as 46 000 years ago, while studies in parts of Africa have suggested rainforest dwellers as early as 200 000 years ago. Moreover anthropological studies of rainforest dwellers in many parts of the world suggest that they are able to maintain a good standard of diet without recourse to technologies that would have been beyond the capabilities of Late Pleistocene Humans.

In a paper published in the journal Science on 13 March 2015, Patrick Roberts of the School of Archaeology at the University of Oxford, Nimal Perera of the Postgraduate Institute of Archaeology in Colombo, Oshan Wedage, Siran Deraniyagala, Jude Perera and Saman Eregama of the Sri Lankan Department of Archaeology, Andrew Gledhill of the Division of Geographic, Archaeological and Environmental Sciences at the University of Bradford and Michael Petraglia and Julia Lee-Thorp, also of the University of Oxford describe a study of carbon and oxygen isotope levels in teeth from Late Pleistocene and Holocene archaeological sites in Sri Lanka, intended to determine the diets of the people living there.

Sri Lanka has yielded the oldest evidence for Human occupation in areas now covered by rainforest outside Africa other than those of the Niah Caves in Borneo, with traces of Human activity, such as rockshelters, stone and bone tools and evidence of personal ornamentation dating back as far as 36 000 years ago. However the climate has varied considerably during the last 36 000 years, and a site currently situated within one habitat may have been in a quite different one when it was occupied. 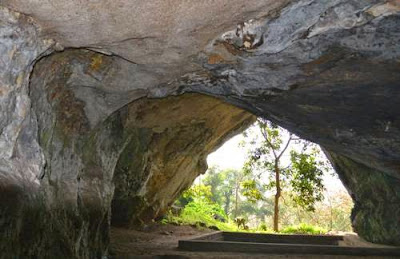 Isotope ratios from tooth enamel have proved an excellent proxy for diet in archaeological studies. Plants which live in open grasslands produce carbohydrates enriched in Carbon-13 compared to those living in closed forest environments, and this is reflected in the tissues of animals which eat those plants. Thus the remains of forest dwelling animals and humans will have a lower Carbon-13 content than those of animals and humans which dwelt in open grasslands. This can be particularly true in dense rainforest environments, where air movements are limited so carbon is cycled between local animals and plants with less outside input. Oxygen isotope levels are related to rainfall levels and can also be a proxy for tropical forests.

Tooth enamel is considered a good source of material for isotope studies, as it is particularly stable and does not tend to become contaminated with material from the environment after death, thus providing a record of the diet of the living animal. However it is not possible simply to take pick up teeth from anywhere on the globe and determine the diet of the living animal from these isotope levels; many factors can affect the isotopic compositions of an animal’s diet, so comparisons are only considered good at a local level.

Sri Lanka has a relatively simple environmental structure, with three main climatic zones, each with its own distinctive flora. The boundaries between these zones are thought to have shifted during the Pleistocene and Holocene, but the basic divisions are thought to have remained essentially the same, leading to the potential to relate ancient diets to environmental zones using isotopic methods.

Roberts et al. examined teeth from three Holocene archaeological sites in Sri Lanka, Fa Hien-lena, Balangoda Kuragala and Bellan-bandi Palassa, as well as one Pleistocene site, Batadomba-lena. The Holocene sites included Humans and animals from between 12 000 and 4000 years ago from forest environments (Fa Hien-lena) and more open environments with mixed forest and grassland (Balangoda Kuragala and Bellan-bandi Palassa). In addition the Balangoda Kuragala site yielded Iron Age material dating from about 3000 years ago, when agriculture is known to have been introduced to Sri Lanka and forest were actively cleared to grow cereal crops. The Batadomba-lena yields Human and animal remains from 20 000 – 17 000 ago in a location that is now a forest environment, though grasslands are known to have expanded in Sri Lanka around this time due to a cooler, drier environment associated with the Last Glacial Maximum. 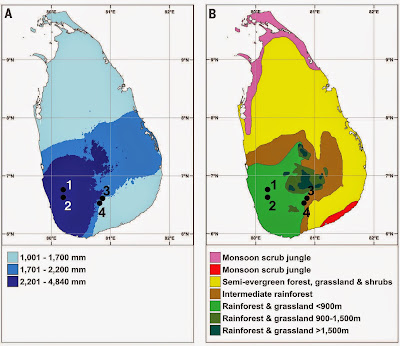 All of the Early Holocene Human remains (12 000 – 4000 years old) grouped with the forest animals in terms of isotopic composition, even those situated in what are now non-forest environments, although within this group they were closest to animals with a preference for forest fringes and more open environments. There was a clear separation between these Early Holocene remains and the Iron Age remains, which grouped firmly with the grassland animals. The Late Pleistocene remains also grouped with the forest animals, though these seemed to have a slightly greater affinity with more open spaces than the Early Holocene remains, probably indicative of the forests being more open at the time.

Thus the Pleistocene Human inhabitants of Sri Lanka appeared to have developed a preference for open rainforest environments by the Last Glacial Maximum, supporting the theory that South Asian populations were able to utilize these environments before the onset of the Holocene.

Stone tools from the Middle to Late Pleistocene of the Nefud Desert.
The Nefud Desert lies in the northwest of Saudi Arabia, and is thought to have been one of the key obstacles that early Humans, and other Hominids, had to pass as they expanded out of Africa into Southwest Asia. The...

Toolmaking in the northeastern Thar Desert 95 600 years ago.
The Thar Desert covers over  200,000 km² of land in the northwest part of the Indian Subcontinent, straddling the border between Pakistan and India. It marks the boundary between the deserts of North Africa and the Middle East to the west and the...