At about 11.50 pm local time on Sunday 24 May 2015 the Instituto Geofísico-Escuela Politécnica Nacional recorded a sudden rise in seismic activity (Earthquakes) beneath Wolf Volcano, which is located on the northern tip of Isabella Island in the Galapagos. This was followed at 2.15 am on Monday 25 May by a major eruption which according to the  Washington Volcanic Ash Advisory Center, produced an ash column 10.7 km high, that subsequently drifted 65 km to the southwest. A second major eruption at 3.45 am produced a 15.2 km high plume which drifted 250 km to the east, while a third eruption shortly after produced a 13.7 km high plume which drifted 250 km to the east. At 4.28 am NASA’s MODIS satellite, which monitors infra-red emissions, detected a significant thermal anomaly on the southeastern flank of the volcano, which would generally indicate a lava eruption, which was later confirmed by investigators from the Galápagos National Park, who reported a new fissure close to the southeastern rim of the caldera, which was producing several major lava streams. 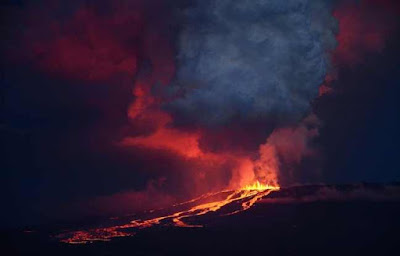 The May 2015 eruption on Wolf Volcano. Diego Paredes/AFP.

These eruptions continued throughout Monday 25 and Tuesday 26 May, before eventually subsiding, producing significant lava flows and smaller ash columns, as well as several hundred kilotons of sulphur-dioxide emissions. There was initial concern that the eruption might present a threat to the volcano’s distinctive fauna; the volcano is a distinct environment compared to the rest of the island, and hosts a unique set of animals of its own, including the Wolf Giant Tortoise, Chelonoidis nigra becki, and Pink Land Iguana, Conolophus marthae, though these are concentrated on the northwest flanks of the volcano and are unlikely to have been harmed by an eruption on the southeastern flanks. 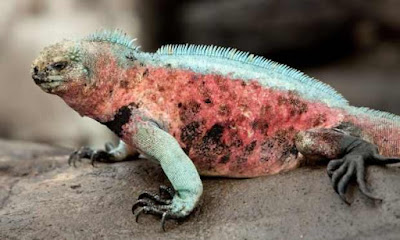 Wolf Volcano is the highest volcano in the Galapagos, reaching 1707 m above sea level, with an oval crater measuring 6 km by 7 km orientated in a northwest-southeast direction. Like all the volcanos of the Galapagos it is a shield volcano, i.e. a volcano made up largely of overlapping lava deposits that resembles an upturned bowl rather than a cone. The placement of this volcano on the northern tip of Isabella Island creates a unique microhabitat on the northwestern flanks of the volcano, cut off from the rest of the island by the steep, smooth lava flows of the main peak. This has served to protect the wildlife of the volcano from invasive species such as feral Cats and Goats, which threaten much of the unique fauna of the Galapagos (though Goats have recently been sighted here). As well as its own unique Tortoise, the Wolf Volcano ecosystem is also home to several populations of introduced tortoises from other islands, including at least two possible specimens of the Pinta Island Giant Tortoise, Chelonoidis nigra abingdoni, thought to have gone extinct with the death of Lonesome George in 2012, which are currently under investigation by wildlife geneticists from Yale University and the Galapagos Conservatory. 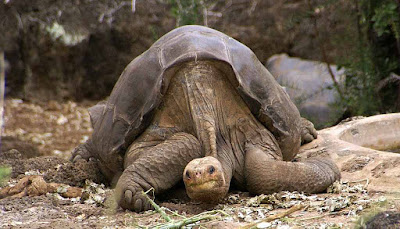 Lonesome George, the last known surviving specimen of the Pinta Island Giant Tortoise, Chelonoidis nigra abingdoni, prior to his death in June 2012. Wikipedia.

The volcanos of the Galapagos are fuelled by a mantle plume, the Galapagos Hotspot, an upwelling of hot magma from deep within the Earth’s mantle which pierces the overlying Nazca Plate, and moves independently of it. This plume transverses the plate at a rate of 0.46 degrees per million years, which has led to the formation of the string of volcanoes which form the Galapagos Islands. However analysis of the geochemical composition of the lavas of Wolf Volcano has shown that these are distinct from the lavas of the neighbouring Ecuador and Darwin volcanoes, but show strong similarities to lavas produced on the Galapagos Spreading Center over 200 km to the north, a trait shared with lavas from other Galapagos volcanoes, most notably Santa Cruz and Genovesa, suggesting that there is some interplay between these two sources. 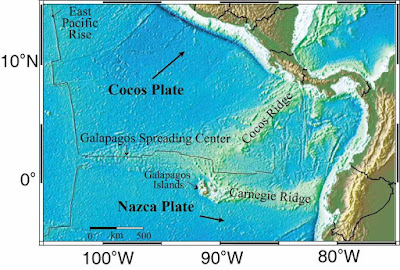 The relative positions of the Galapagos Islands and Galapagos Spreading Center. School of Ocean and Earth Science and Technology/University of Hawaii at Manoa.

Wolf Volcano is the most active volcano in the Galapagos, it was first observed erupting in 1797 and most recently in 1982; the 2015 eruption is the eleventh recorded eruption on the volcano, which is believed to be slightly less than 500 000 years old, compared to an age of about 10 million years for the surrounding seafloor. It takes its name from Theodor Wolf, a German geologist who made the first organized study of the volcanoes of the Galapagos in the nineteenth century, and after whom Wolf Island is also named.

Chilean authorities begin evacuations after eruptions on Mount Calbuco.
Authorities in Chile have began to evacuate homes within 20 km of Mount Calbuco, a volcano in the Los Lagos Region in the south of the country, after the volcano began to erupt at about 6.00 pm local... 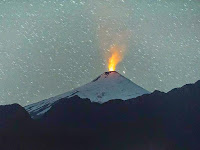 Evacuations begin after major eruption on Villarrica.
Authorities in Chile have began to evacuate people from the vicinity of Volcán Villarrica, following a major eruption overnight between Sunday 1 and Monday 2 March 2015. Villarrica is active at some level more-or-less all of the time, but in mid February the level...

Eruption on Mount Ambrym, Vanuatu.
The Vanuatu Geohazards Observatory issued a warning to the public on Saturday 21 February following an eruption from a new vent inside the caldera of Mount Ambrym a volcanic island in the New Hebrides. The eruption is apparently small in nature, but its...