Elephants have a long and well understood fossil record, but this can usually only tell us about the physical attributes of Elephants, i.e. their morphology, diet etc. Modern elephants display sophisticated social behavior, with solitary males and herds made up of females and juveniles lead by dominant matriarchs, something hard to detect in the fossil record.
In a paper published in the journal Biology Letters on 22 February 2012, a team of scientists lead by Faysal Bibi of the Institut de Paléoprimatologie et Paléontologie Humaine at the Université de Poitiers describe the discovery of a set of Late Miocene elephant trackways at Mleisa in the United Arab Emirates that apparently show evidence of both large, solitary Elephants and herds including adults and juveniles of various sizes, as is seen in modern Elephants.
Composite aerial photograph of the study site from GigaPan.
The trackways show the tracks of a herd of Elephants extending for 190 m, bisected the track of a single large elephant, which extends for 260 m. The large elephant has a stride length of 3 m, comparable to that of modern African Elephants. The largest member of the pack was apparently of similar size to the solitary Elephant, which is harder to explain. Modern Elephants show sexual dimorphism, and the females are considerably smaller than the males, so if the tracks do represent a herd lead by a female matriarch, then that female must have been similar in size to a male, and considerably larger than modern female Elephants. Bibi et al. suggest that a review of sexual dimorphism in fossil elephants may shed light on this mystery.
There are three modern species of Elephant, divided into two genera; Elephas maximus, the Indian Elephant and the African Elephants Loxodonta africana (African Bush Elephants) and Loxodonta cyclotis (African Forest Elephants). Neither genera was around in the Late Miocene, but the ancestors of the two groups were already separate and matriarchal herding is seen in both groups, suggesting that the behavior should have arisen by then. Three species of Elephant are known to have been present in the area at the time when the tracks were made; Stegotetrabelodon syrticus, Deinotherium sp. and ‘Mastodon’ grandincisivus. Of these Stegotetrabelodon syrticus is though most likely to have been the track-maker, as it was the most abundant, though it is not possible to be 100% sure that the solitary track-maker and the herd track-makers were of the same species. The genera Elephas and Stegotetrabelodon are more closely related to one another than either is related to Stegotetrabelodon, so even if matriarchal behavior had arisen in the common ancestor of both before the Late Miocene, it does not necessarily mean that the same behavior would have been seen in Stegotetrabelodon. 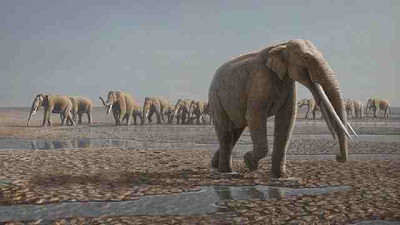 Reconstruction of the formation of the track site, with Stegotetrabelodon syrticus as the track-maker, by paleoartist Mauricio Antón.
See also Fossil beaked whales from the seafloor of the Southern Indian Ocean, Identifying Triassic footprints, Dinosaur footprints discovered in Southwest Arkansas, A Woolly Rhino from the Pliocene of Tibet and Mammals on Sciency Thoughts YouTube.
Posted by Joe Bauwens at 08:35