Four killed by landslide at mine in Yunna Province, China.

Four workers have been killed and a fifth injured following a landslide at a min in Jinping County, in Yunnan Province, China, on Monday 23 December 2013. The incident is described as having taken place on an 'earthworks above a tailing pond' at a 'nonferrous metals mine' operated by the Jinping Kun Steel Gold River Co; it is not clear if this means a site of active excavation or a spoil heap. The dead men have been named as Ming Dong Yun, Lishao Kun, Peng Xingguang and Zhang Haichun. The fifth man, Zhao Guanghua, is being treated at the First People's Hospital of Honghe Prefecture; his condition is described as non-life-threatening. 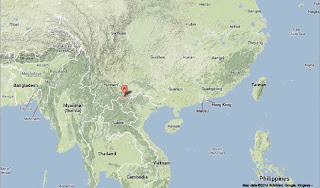 The approximate location of the 23 December 2013 Jinping Landslide. Google Maps.

The incident happened following several days of heavy rain. Landslides are a common problem after severe weather events, as excess pore water pressure can overcome cohesion in soil and sediments, allowing them to flow like liquids. Approximately 90% of all landslides are caused by heavy rainfall.