A new species of Earwigfly from Brazil.

Earwigflies (Meropeidae) are a small group within the Mecoptera (Scorpionflies), known only from four fossil and two modern species. Three of the fossil species are from the Triassic of Kyrgyzstan, and the fourth from the Jurassic of Siberia, while the two modern species, Merope tuber and Austromerope poultoni are from North America and Australia respectively. Little is known of the biology of these Insects, the larvae having never been observed. It is thought that they may have been more diverse in the Mesozoic, and that the modern populations are a relict.

In a paper published in the journal ZooKeys on 15 February 2013, Renato Machado of the Department of Entomology at Texas A & M University, Ricardo Kawada of the Laboratório de Entomologia Sistemática at the Universidade Federal do Espírito Santo and José Rafael of the Instituto Nacional de Pesquisas da Amazonia, describe a new species of extant Earwigfly from Espírito Santo State in Brazil.

The new species is placed in the genus Austromerope, and given the specific name brasiliensis, meaning 'from Brazil'. Austromerope brasiliensis is described from a single 20 mm male specimen caught in a Malaise trap (tent like net structure used by entomologists to trap flying insects) at Domingos Martins in Espírito Santo State Brazil. 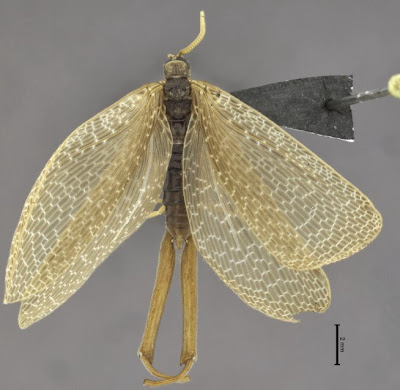 Austromerope brasiliensis is more similar to the Australian species Austromerope poultoni than the North American Merope tuber. As well as being the first member of the Meropeidae recorded in South America, Austromerope brasiliensis is the fourth Scorpionfly known from South America belonging to a family also known from Australia, other than the Bittacidae (Hangingflies), which are global in distribution. The other three species are all members of the genus Nannochorista, which is also known from Australia. The genus Nannochorista, along with a second genus, Microchorista, which comprises one species from New Zealand, comprise the family Nannochoristidae. All other Australian families of the Mecoptera are endemic (found only in Australia), whereas North American families of Scorpionflies tend to be found in Earasia as wel. One family, the Eomeropidae, comprises only a single species from South America. This implies that the Meropeidae had arisen before the breakup of the supercontint of Pangea in the Jurassic, with the lineages that gave rise to the modern genera Merope and Austromerope being trapped on Laurasia and Gondwana respectivel, while.most other famlies of the Meropidae apparently arose later.