At least six people have died after an Atlantic Storm hit Britain and France on Monday 23 December 2013. Simon Martindale (48) drowned in the river Rothesay in Cumbria while attempting to rescue his dog. A second, as yet unidentified, man was also killed trying to rescue a dog from the River Lemon in Devon (it should be noted that Dogs are much better swimmers than Humans, and that we should never enter waters presenting a Dog with problems, however high our regard for the animal). In Shropshire a woman was killed in a car crash during bad weather conditions. The body of an as yet unnamed woman was recovered from a river in North Wales on Monday 23 December and that of an unnamed man was recovered from a stream near Telford in Staffordshire on Tuesday Morning. A teenage boy was killed and a second severely injured when a wall collapsed at a building site in Normandy on Monday, and a Russian sailor is missing after being swept from the deck of a cargo ship in the English Channel. 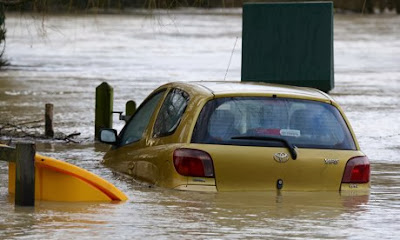 A car trapped in floodwater at Brockham in Surry, England.  Tony Kershaw/Rex.

The storms also caused severe problems for transport and infrastructure in the two countries, with many people stranded or forced to cancel travel plans over the Christmas period, as flights were cancelled and road and rail networks disrupted by flooding and landslides. Landslides are a common problem after severe weather events, as excess pore water pressure can overcome cohesion in soil and sediments, allowing them to flow like liquids. Approximately 90% of all landslides are caused by heavy rainfall. In parts if Dorset people were evacuated from their homes due to flooding, and around 300 000 homes in the UK and 250 000 homes in France were left without power. 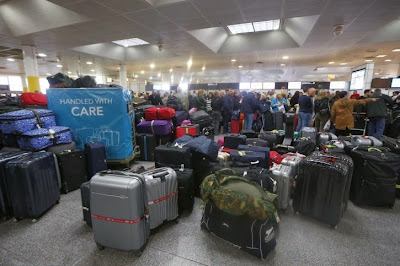 Passengers trapped at Gatwick Airport in the UK on 24 December 2013. Sang Tan/AP. 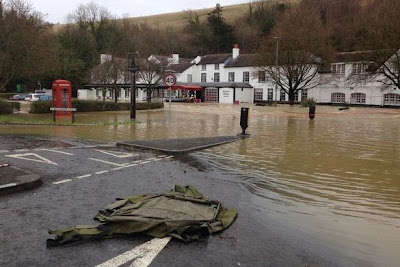 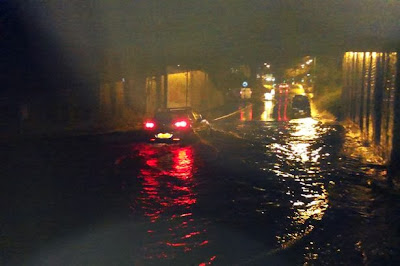 Flooding at Solihull in the West Midlands, England. Birmingham Mail.

See also At least twelve dead as Cyclone Bodil hits northern Europe, Cyclone Cleopatra kills at least eighteen people on Sardinia, At least four dead in Ridyadh flooding, Around 300 believed to have died in flooding after Tropical Cyclone Three hits Somalia and Five dead and one missing as western Europe is hit by worst Atlantic Storm in a decade.