A mass stranding of Rorqual Whales (Balaenopteridae) from the Miocene of the Atacama Desert, Chile.

Mass strandings of Whales and other large marine vertebrates are often attributed to Human activity (probably with some degree of justice), but are known to have occurred in the fossil record millions of years before Humans existed, so this cannot be the only cause of such events. It is thought that such strandings can also be triggered by extreme weather or other events (such as hurricanes or tsunamis), as well as poisoning of Whales by toxic algal blooms, and herding behaviour which can make other members of a group reluctant to leave individuals which get into trouble, so that they also become trapped.

In a paper published in the Proceeding of the Royal Society Series B Biological Sciences on 26 February 2014, a team of scientists led by Nicholas Pyenson of the Department of Paleobiology at the National Museum of Natural History, the Departments of Mammology and Paleontology at the Burke Museum of Natural History and Culture, describe deposits at  a site, called Cerro Ballena beside the Pan-American Highway in the Atacama Region of Chile, at which a large number of Late Miocene marine animals are preserved. This site includes over marine mammals on four distinct horizons over an eight meter section, many of which are preserved as articulated, or at least closely associated skeletons. The deposits were exposed during work on the road, and are now covered, though it it that the formation extends for some distance beyond the area that was exposed.

The articulated skeleton of a Balleen Whale ﻿from the Cerro Ballena site in the Atacama Region of Chile. Pyenson et al. (2014).

These mammals include 31 Balleen Whales (Rorquals), representing a range of growth stages from young calves to adults, all apparently of the same species, as well as two other species of Whales (a type of Sperm Whale, and a Walrus-like Toothed Whale), as well as at least two species of Seals and a Marine Sloth. The Balleen Whales were found on all of the bone bearing horizons, are all orientated in more-or-less the same direction, were all articulated, and were all preserved ventral (belly) side up. 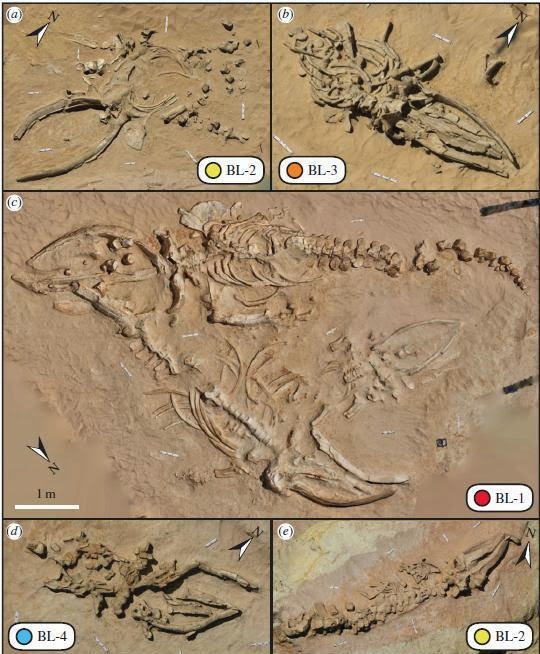 The deposits where these specimens are preserved are interpreted as having been laid down along a beach in a desert area (the Atacama Desert already existed by this time, although sea levels were somewhat higher). It is thought that the skeletons have remained relatively intact due to the absence of large predators that could dismember the Whales, which would have been a source of food not usually available. There are trace marks on the bones which are interpreted as having been caused by feeding from smaller animals, probably crabs.

The occurrence of large numbers of Whales belonging to the same species, combined with the common directional alignment of the bodies and the inverted position in which they are preserved, is taken as evidence that these specimens represent a series of mass stranding events, in which groups of Whales were periodically stranded on the shore, either before or after they died. Mass strandings of Rocqual Whales are relatively rare today, but do occur, and may have been more common prior to the large reduction in population numbers that these Whales suffered due to Human hunting activity in the nineteenth and twentieth centuries.

Human activity can quickly be ruled out as the cause of mass Whale strandings in the Late Miocene, since Humans did not exist at this time. Storms or tsunamis can also be ruled out at this site, as such events would have left distinctive sedimentary patterns on the shore, which do not occur; rather the beaches where these Whales were stranded appear to have been quite stable, with extensive trace fossils suggesting a healthy fauna of burrowing animals, which would be expected to be disrupted by a large storm or tsunami event.

Whales are subject to epidemic diseases, like other animals, most diseases are species specific, making it unlikely that more than one species of Whale would be affected, and no known pathogen could affect animals as diverse as Whales, Seals and Sloths. Nor are such infections likely to recur repeatedly over a period of several thousand years, which appears to be the case at Cerro Ballena, effectively ruling this out as a cause of death.

For this reason Pyenson et al. conclude that the most likely cause of these deaths is mass poisoning, triggered by blooms of toxic algae, which are known to be extremely harmful to modern marine Mammals, sometimes killing even large Whales within a mater of hours.