Building a 3D geological model of London and the Thames Valley.

National geological surveys have traditionally produced two dimensional geological maps showing the outcropping of rock formations, combined with data on the dip of the strata (i.e. the angle at which the beds are inclined) and rock faults in the area, which enable trained geologists to build rough develop a rough understanding of any areas of interest prior to commencing fieldwork. Recently such agencies have also begun to develop three dimensional computer models showing the geology beneath the Earth’s surface, providing immediately readable data not just to geologists but to other stakeholders, such as politicians, business leaders, environmentalists and the general public.

In a paper published in the Proceedings of the Geologists’Association in September 2014, Stephen Mathers, Helen Burke, Ricky Terrington, Stephen Thorpe, RachelDearden, Paul Williamson and Jonathan Ford of the British Geological Survey detail the development of a three dimensional geological model of London and the Thames Valley in southeast England.

The area modelled covers an area of 4800 km2, from the inner Thames Estuary in the east to Newbury in the west. It extends to a depth of several hundred meters, though the precise depth varies across the model, being determined by geology. The Cretaceous Chalk Group and Upper Greensand and Gault Formations (the latter two combined as a single unit in the model) are mapped across the whole area, while the underlying Lower Greensand Group, Wealden Group and Jurassic sedimentary rocks are only included in the southern, western and northwestern parts of the area. 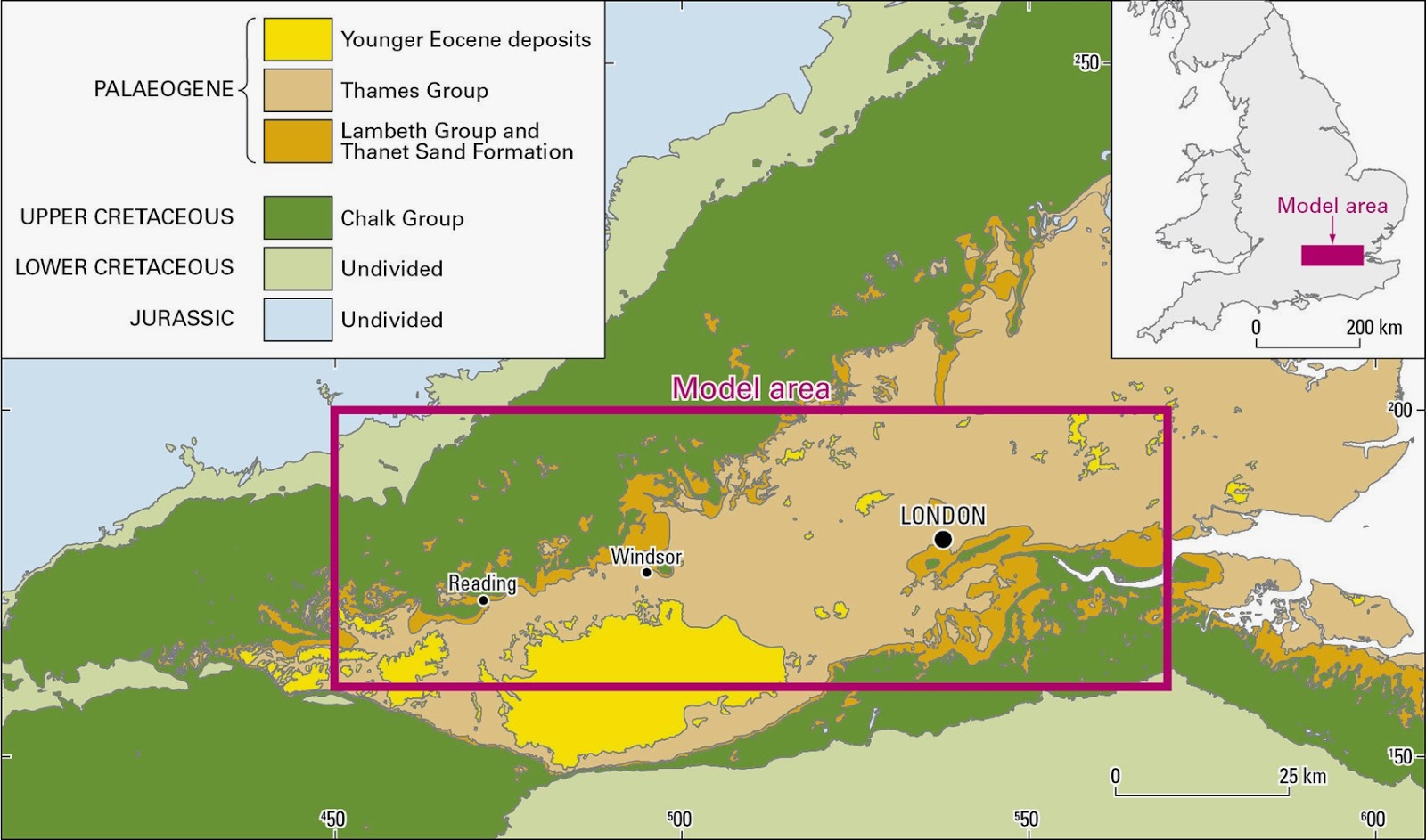 The bedrock geology of the London Basin and location of the modelled area. Mathers et al. (2014).

The structure of these deposits is dominated by the London Basin synclinorium; roughly speaking this means the deposits are folded into a ‘v’ shape, raised and exposed to the west and sinking beneath other deposits in the east. This was formed in the Palaeocene-Miocene by regional compression, associated with the Alpine Orogeny (an intense interval of geological compression and folding in central Europe, caused by the impact of the African Plate into the Eurasian Plate from the south and resulting in the formation of the Alps, as well as milder deformation in other parts of Europe). Effectively this means that the Chalk Group is exposed as a ‘v’ shaped rim around the Thames Valley, with older strata exposed to the north, south and west, and younger strata within the valley and to the east.

The Chalk Group form the main aquifer within the Thames Valley, being over 200 m thick across its total extent, and highly permeable to water. Historically it was a source of water for artesian wells across the region. However it is also prone to dissolution (i.e. the soft calcium carbonate that makes it up easily dissolves in water), which can cause it to collapse, causing sinkholes and other instabilities. The Chalk has been subdivided into several units in other studies, but is treated as a single unit in the model.

Above the Chalk the Palaeocene Thanet Sand Formation has a bed of cobble-sized flints at the base, overlain by coarsening-upwardsglauconitic fine-grained sands and silts. This is about 40 m thick in the east of the area, but thins to the west. Overlying this is the Palaeocene to Eocene Lambeth Group across much of western London; this is about 30 m thick at its deepest. Lithologically it is quite variable, comprising sands, silts, clays and gravels.

Above these lies the Eocene Thames Group, with the sands and pebbles of the Harwich Formation forming the base in the east, where it is as much as 12 m thick in places, and the London Clay forming the base in the west and overlying the Harwich Formation in the east. The London Clay is a blue-grey fossiliferousbioturbated clays, with occasional silt, sand or pebble beds, which reaches a maximum thickness of about 150 m. Above this lie the younger Bagshot, Windlesham and Camberley Sand formations (all sandy), with a maximum combined thickness of about 70 m; though these are mainly present only on the caps of high hills in the central London Basin. The thinner St Anne’s Hill and Stanners Hill Pebble Beds, and the Swinley Clay Member are also present in places, as are the Neogene Lenham Beds at a single patch in Kent.

The model also includes a large number of superficial and artificial units of limited extent, including Pliocene-Quaternary river terrace deposits laid down by the Thames and other rivers; the eastern part of the area has been uplifted from the Pliocene onwards by the formation of the North Sea Basin, and the rivers have cut down through the underlying deposits as they have been lifted up.

The British Geological Survey holds records of about 100 000 boreholes made within the study area, but many of these are shallow and made in clusters relating to specific site investigations. Data from a total of 7174 boreholes was used to construct the final model, combined with pre-existing ESRI shapefiles from the BGS DiGMapGB-50 dataset and Ordnance Survey Landform Profile data for the land surface.

The Mesozoic and Palaeogene (Palaeocene plus Eocene) geology was initially modelled in GSI3D, with the surface geology added from the DiGMapGB-50 dataset. This surface geology was then compared to modern 1:10 000 topographic maps to identify recent ground modification such as embankments and cuttings along transport routes, reservoirs, and other evidently man-made features. 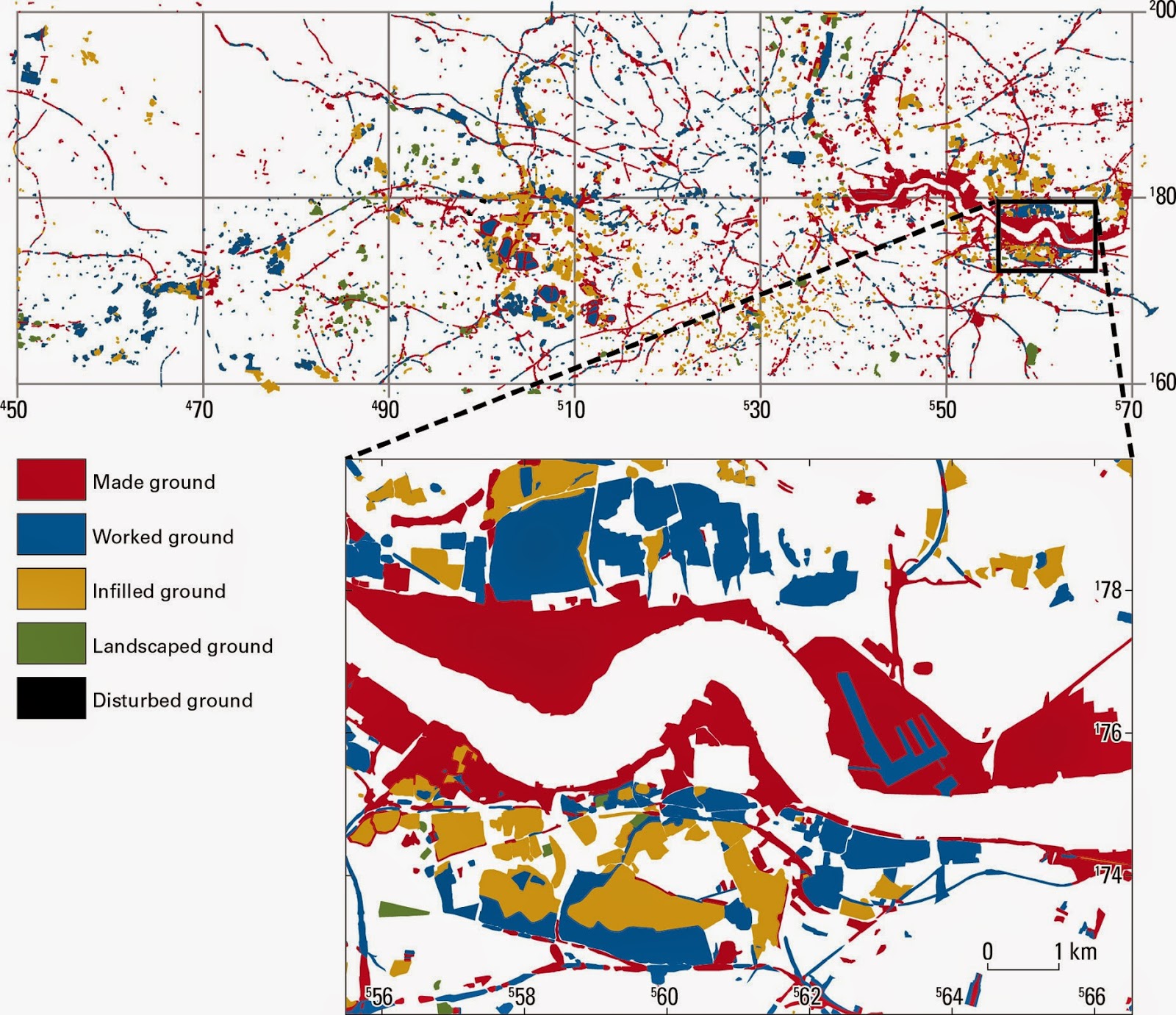 Artificially modified ground coverage for the whole model area and below for the small inset area straddling the Thames at Dartford. Mathers et al. (2014).

The model is intended for general geoscience and educational applications. It is based upon 1:50 000 scale maps, but as a computer model with a zoom function is considered to be useable at a scale range of 1:25 000 to 1:100 000. It can be used to generate artificial boreholes, cross sections and depth slices, which can be used as a framework upon which more detailed studies of specific sites and local areas can be based. It can also be used for regional scale assessments for hydrogeology, planning and mineral extraction.

However the model is not considered to be accurate outside the 1:25 000 to 1:100 000 scale range, nor for providing site assessments for specific locations without actual geological fieldwork. Neither is it considered to be suitable for mineral reserve quantification of any kind, or detailed studies of superficial deposits (Pliocene or later), which have been added mostly as 2D surface polygons. The map does not include small scale local geological features such as small scour hollows, relict pingo and allied periglacial structures. 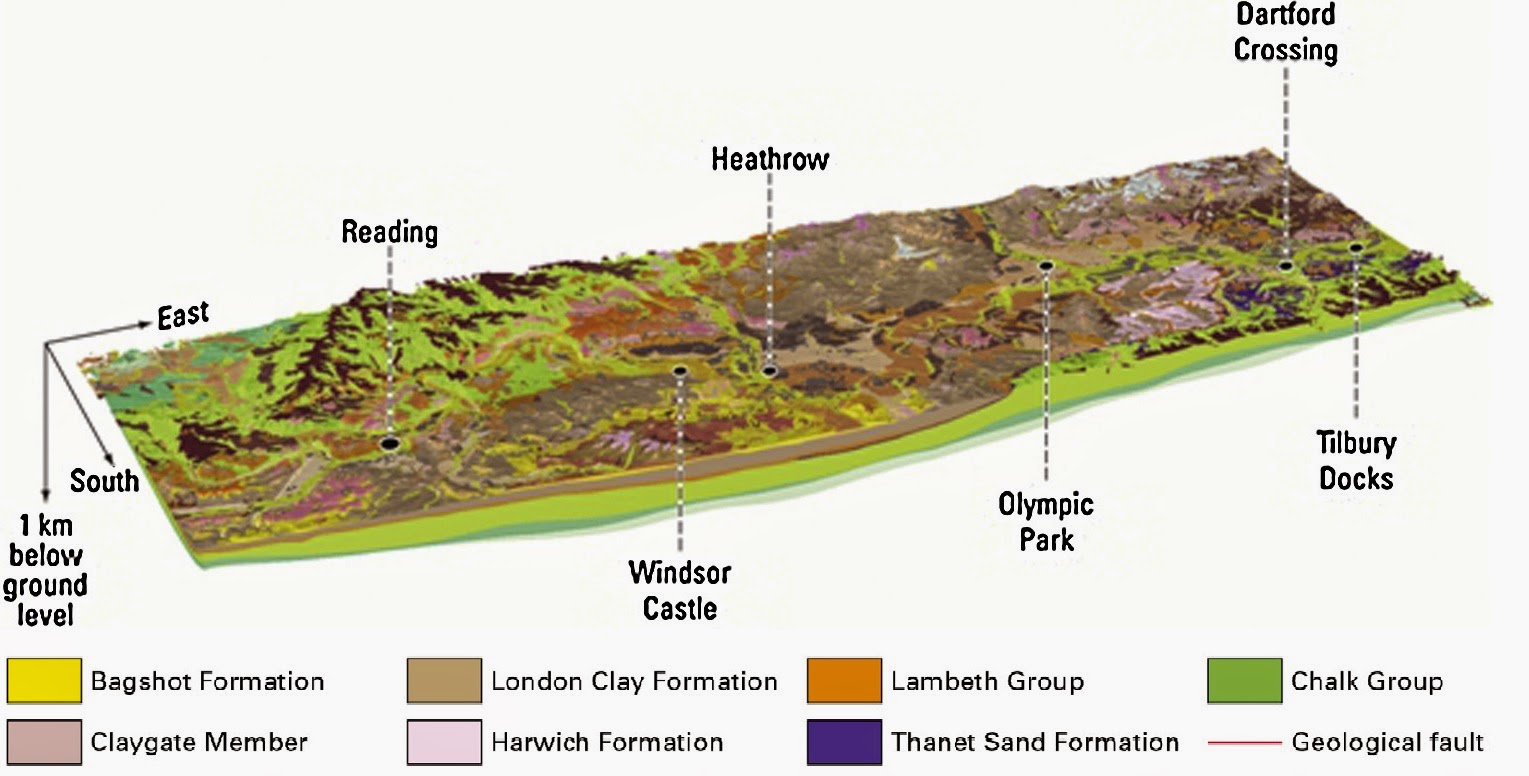 The model of bedrock and superficial deposits to the base of the Cretaceous strata, viewed from the south-southwest. The vertical exaggeration is x 10. Mathers et al. (2014).

While the model cannot be used to provide specific solutions for site or route based projects, nor as an alternative to actual fieldwork, it is intended to provide a good base from which more detailed studies can be developed, and as such has already been used in the development of the new underground Farringdon Station in east London, part of an east-west Crossrail project intended to link Heathrow Airport to the Channel Tunnel Rail Link, the development of a route map for the HS2 (High Speed Two) rail-link intended to connect Euston Station to Birmingham and the Northwest, and the development of a more detailed model of the Chalk Group deposits beneath central London for the Environment Agency of England and Wales.

The project is very much intended to be the beginning the long term development of a more detailed model, rather than a finished product in itself. Future aims of the project include developing a much better 3D model of the surface geology, including Quaternary deposits and artificially modified ground, developing a more detailed understanding of faulting across the region, subdividing the Jurassic deposits, Chalk Group and Lambeth Group into their component formations, expanding the model into adjacent areas and developing a better understanding of the needs of model users and modifying the model to incorporate these. 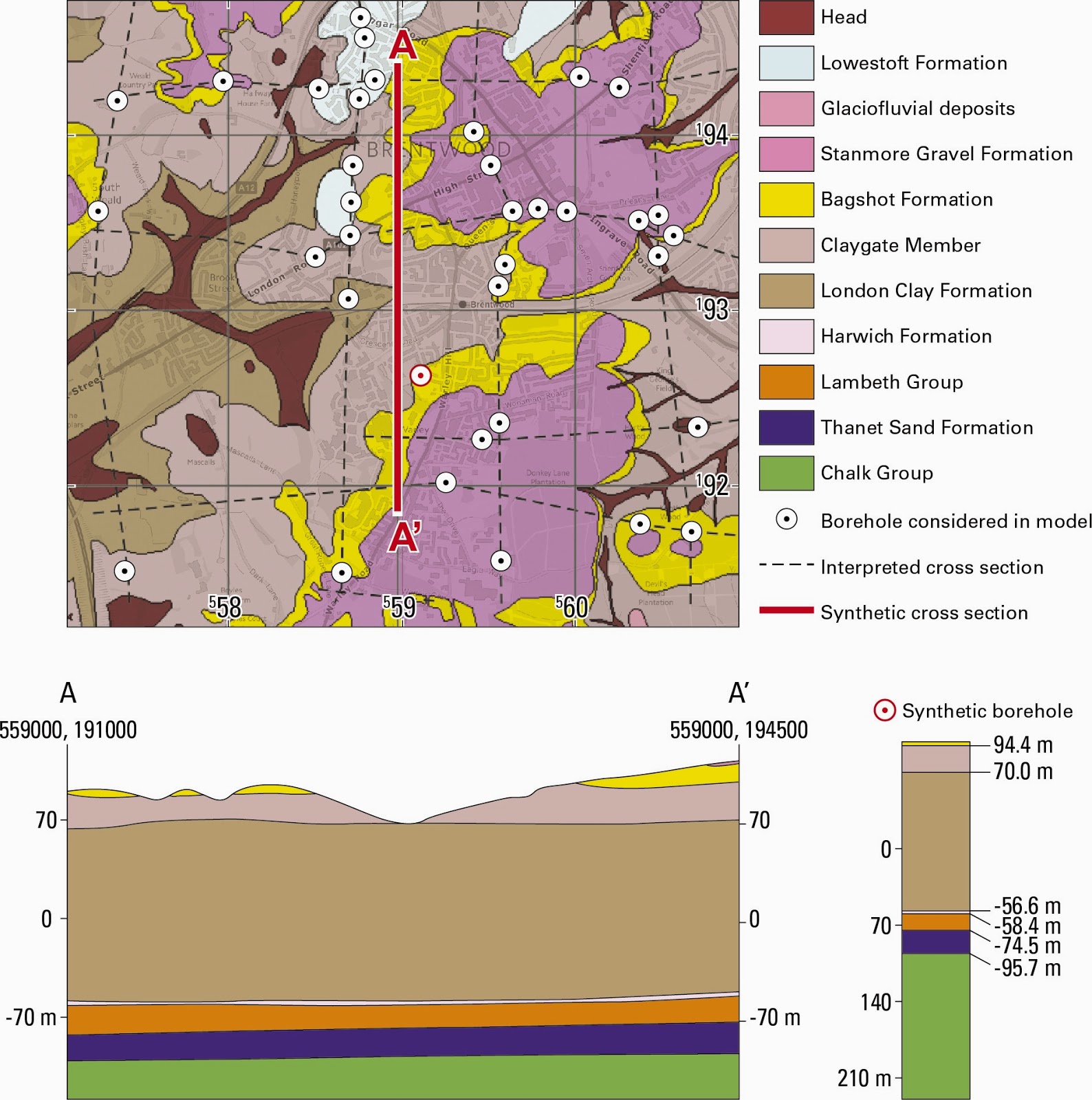 It is possible to download free automatically generated sections from the model as PDF files here. It is also possible to access a wider range of licenced material in a variety of formats, and to access models in a standalone BGS LithoframeViewer here. 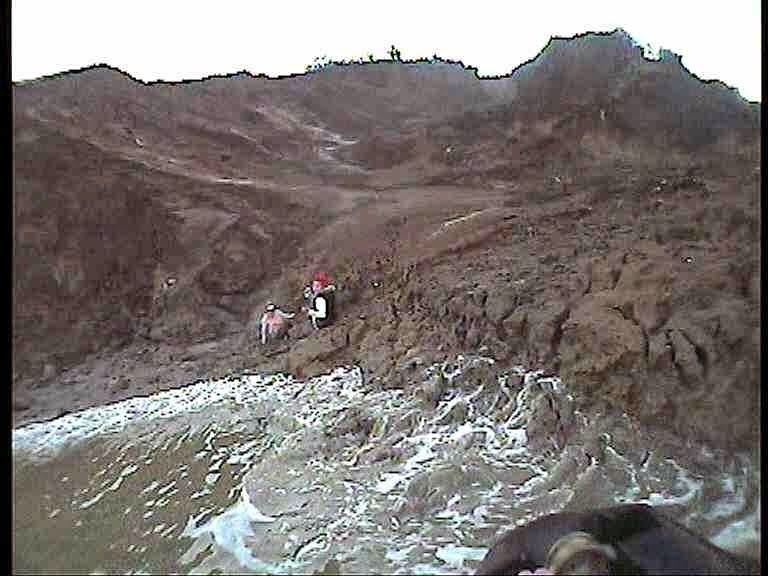 Two teenaged girls rescued from soft mud at popular English fossil hunting site.
Two teenaged girls were rescues by teams from Kent Fire and Rescue and the Whitstable RNLI after becoming trapped in soft mud at Warden Point on the Isle of Sheppey (off the north coast of Kent in the Thames Estuary) on Saturday 2014. Initial attempts... 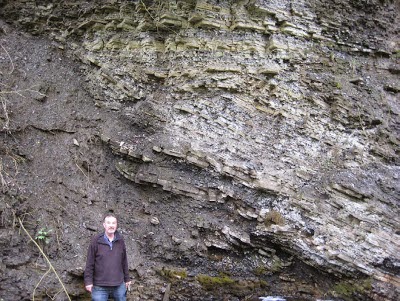 The British Geological Survey reports on Shale Gasses in the Bowland-Hodder Unit.
Shale gasses have become an economically important source of hydrocarbons in the early twenty-first century, as other reserves have run low and exploration companies have begun to look for new supplies of energy. In conventional oil and gas reserves the... 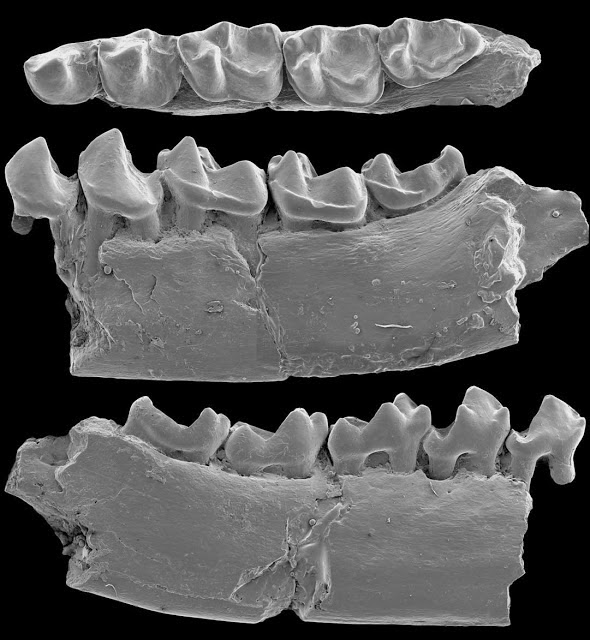 An Omomyid Primate from the Eocene of South London.
The Omomyids were a group of Palaeocene-Oligocene Primates similar, and probably related to, the modern Tarsiers. They had large, forward facing, eyes and grasping hands and feet with nails instead of claws. Their teeth sugest that they had a diet of fruit and insects, and their skeltel morphology that they lived in trees and that most species were nocturnal. They appeared in the...