The Grand Canyon-Parashant National Monument lies in northwestern Arizona, covering 4,451 km2 of deep canyons, mesas, and mountains. It has typical a Mojave Desert flora dominated by the Creosote Bush and Joshua Tree at its lower elevations, giving way to Pinyon and Juniper woodlands then Colorado Plateau grasslands and Pine and Aspen forest at higher altitudes. It also has a series of cave systems, which have been found to host a distinctive Arthropod fauna with many unique species of Book Lice, Beetles, Centipedes, Millipedes, Isopods and Crickets.

In a paper published in the Journal of Arachnology in November 2014, Mark Harvey of the Department of Terrestrial Zoology at the Western AustralianMuseum, the Division of Invertebrate Zoology at the American Museum of Natural History, the California Academy of Sciences, the School of Animal Biology, at the University of Western Australia and the School of Natural Sciences at Edith Cowan University, and Judson Wynne of the Department of Biological Sciences, Colorado Plateau Biodiversity Center and Landscape Conservation Initiative at Northern Arizona University, describe two new species of Pseudoscorpion from a single cave in the Grand Canyon-Parashant National Monument.

The cave is located in Juniper scrubland at an altitude of 1585 m on the north side of the lower Colorado River along the western extent of the Grand Canyon. It is set in the Kaibab Limestone Formation, with a south facing entrance at the bottom of a large sinkhole, and is 76.2 m long and 10.4 m deep. The deeper parts of the cave are considered to be a true cave deep-zone, with constant complete darkness, a stable temperature and an atmosphere with water at near saturation point with little-or-no through-flow. This cave has produced the second most diverse biological community in the Grand Canyon-Parashant National Monument, with the largest known Cricket roost in northern Arizona.

The first new species described is placed in the genus Hesperochernes, which has nineteen previously described species from caves and woodland across North America, from Mexico and the Dominican Republic in the south to Canada in the North, and one previously described species from under tree-bark in Japan. It is given the specific name Hesperochernes bradybaughi in honour of Jeff Bradybaugh, the former superintendent of Grand Canyon-Parashant National Monument for his advocacy of cave research, conservation and management. 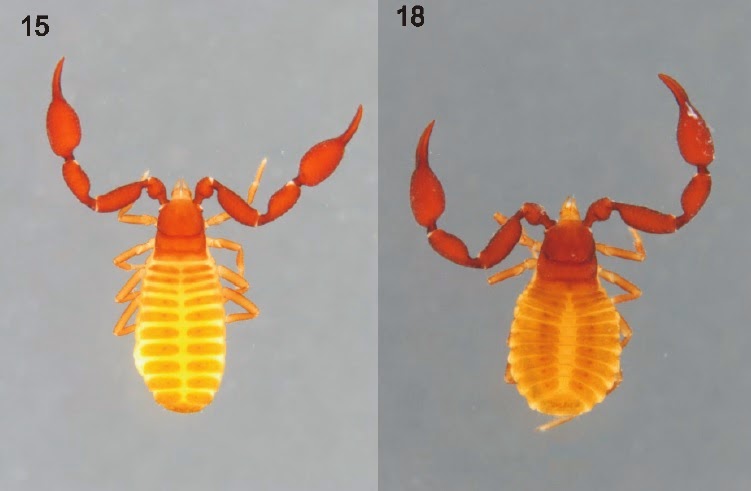 Hesperochernes bradybaughi is described from three specimens, one male and two females. The male is 3.11 mm in length, the females 2.82 mm and 4.21 mm, all are reddish brown and yellow in colour. The species is eyeless, and has long slender limbs.

The second new species is placed in the genus Tuberochernes, which to date contains only two other species, both from cave-systems in the southwestern United States. It is given the specific name Tuberochernes cohni, in honour of the late Theodore ‘Ted’ Cohn, a distinguished orthopterist (scientist studying Crickets and Grasshoppers) who passed away in November 2013 at the age of 82, and who identified a new genus of Crickets from the same cave. 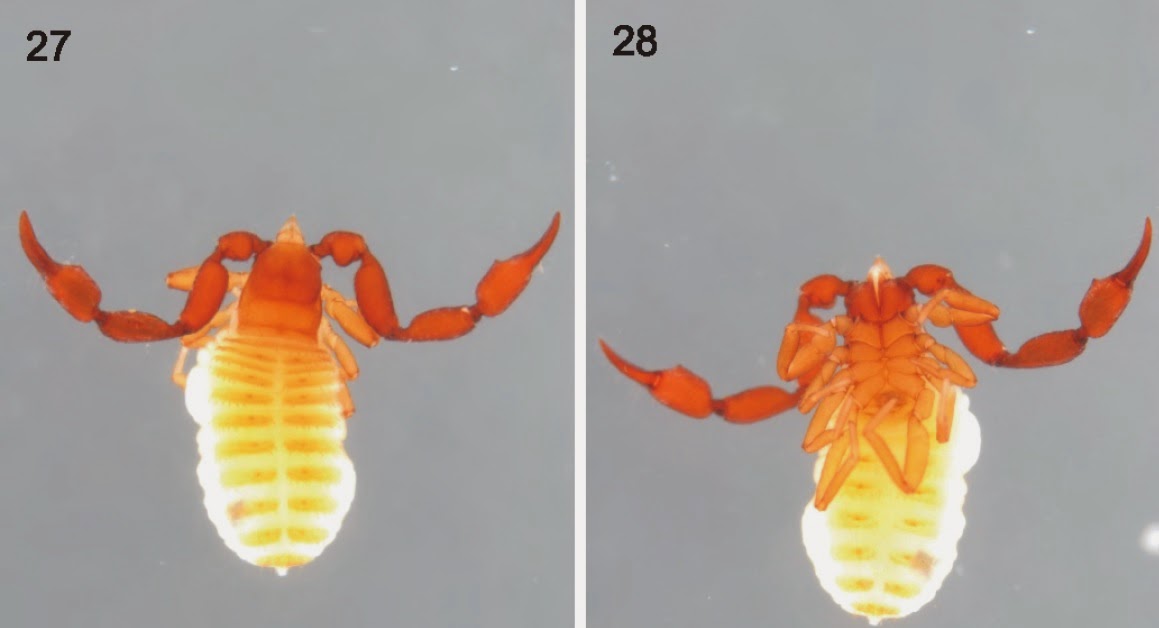 Tuberochernes cohniis described from a single male specimen, 3.38 mm in length and reddish brown in colour. This species is also eyeless with elongate, slender limbs.

A new species of Pseudoscorpion from Hainan Island, south China.            Pseudoscorpions (or False Scorpions) are small Arachnids with flattened oval or pear-shaped bodies; they have pincers resembling those of true Scorpions, but lack stinging tails. The largest species reach 12... 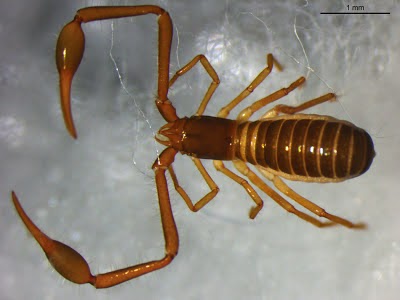 An Eocene False Scorpion from Baltic amber.
False Scorpions are Arachnids related to Camel Spiders, Harvestmen and True Scorpions; they resemble Harvestmen with enormous, Scorpion-like claws, but are very small (the largest known species is...
Follow Sciency Thoughts on Facebook.