A new specimen of Microraptor from western Liaoning Province, China.

In December 2000 Xing Xu, Zonghe Zhou and Xioalin Wang of the Institute of Vertebrate Paleontologyand Paleoanthropology of the Chinese Academy of Sciences described a new species of Dromaeosaurid from the Early Cretaceous Jiufotang Formation of western Liaoning Province in a paper in the journal Nature. This was the smallest non-Avian Dinosaur ever found, and showed a remarkable similarity to the earliest Birds, including an extensive covering of feathers.

This Dinosaur was named Microraptor zhaoianus, and since this time a number of further specimens of Microraptor have been discovered and two further species have been described (though these are not universally accepted). Remarkably the new specimens have revealed further Bird-like features, including the presence of two pairs of wings (unlike in Birds, the hindlimbs of Microraptor were also modified for flight). 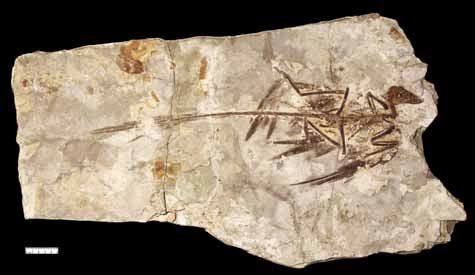 The new specimen is exceptionally well preserved, possessing a number of features not seen in other specimens. It shows several traits previously described that clearly mark Microraptor out as a Dromaeosaur, including extremely elongate prezygapophyses and chevrons (re-enforcing structures that help support the rigid tail in Dinosaurs – check), a vertical process on the posteromedial corner of the retroarticular process of the mandible and a reduced manual phalanx III-2, and in addition another Dromaeosaur trait not seen in any previously described specimen, dorsal displacement of the maxillary fenestra and a large quadrate foramen. 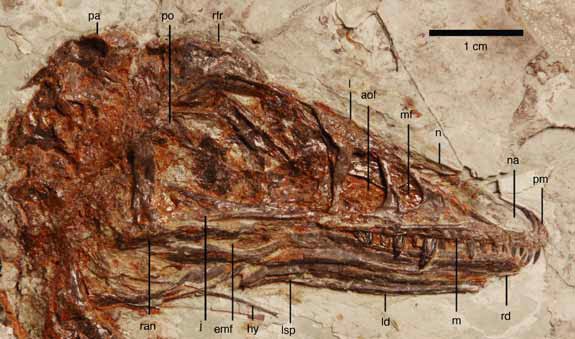 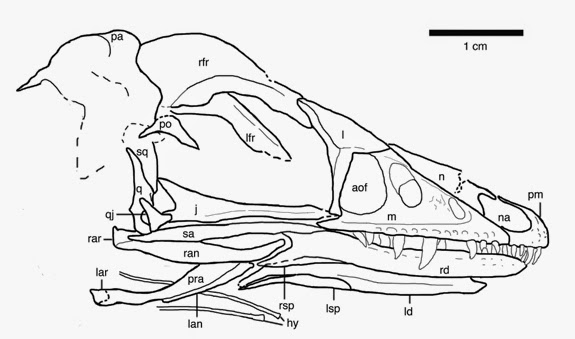 The new specimen also shows a number of features in common with early Troodontids which have been reported in other specimens, such as a short subnarial process on the premaxilla, smaller teeth on the premaxilla than on the maxilla, no denticles on the anterior carinae of the maxillary teeth and a Troodontid-like articulation of the foot. In addition this specimen has a better-preserved maxilla and face than previous specimens, showing other Troodontid-like features, such as a shallow main body of the bone and a slender interfenestral bar combined with an enlarged maxillary fenestra. This supports the close relationship of the Dromaeosaurs and Troodontids previously proposed; the two are currently grouped together to form the Deinonychosauria, to the exclusion of other Maniraptors, including the Birds.

However the arrangement of the rib-cage in the new specimen is probably its most remarkable feature, this preserves gastralia and uncinate processes, features known from a variety of Theropod Dinosaurs including other Dromeaosaurs, but in this case remarkably similar to those of the early Bird Confuciusornis. This suggests that respiration in Microraptorwas similar to that in early Birds, lending further weight to the idea that it could also fly. 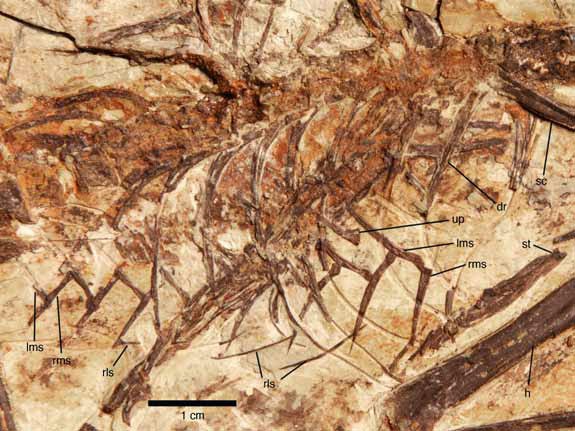 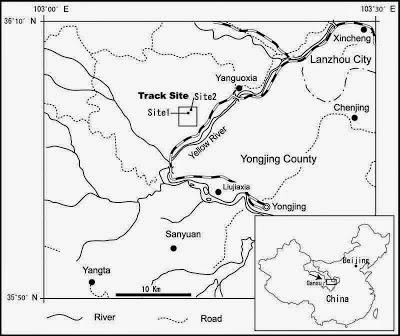 Dinosaur footprints from the Early Cretaceous of Ganzu Province, China.            The Deinonychosaurs are the group of dinosaurs most closely related to the birds. They are divided into two groups, the Dromaeosaurs (popularly known as 'Raptors') and the Troodontids, which share a common hindlimb morphology, with two digits used to support... 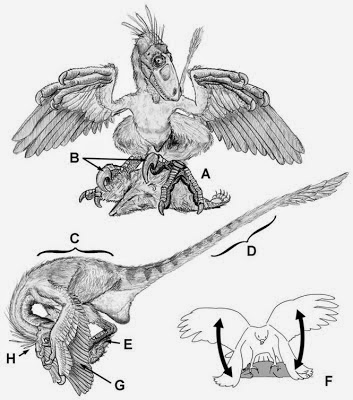