Groundwater systems beneath the McMurdo Dry Valleys of Antarctica.

The McMurdo Dry Valleys are a largely ice-free region of Antarctica on the Ross Sea coast, discovered by Robert Scott in the early twentieth century. The valleys contain a series of lakes, lacking surface connections and often separated by glaciers. Most of the ground in the valleys is frozen, though near-surface groundwater seeps and tracks are present in the upper 70 cm of soil, which are typically extremely saline, enabling them to remain liquid at temperatures below zero degrees centigrade. Deeper saline waterways are also predicted in the Valleys, but several attempts at finding them with boreholes by the Antarctic Dry Valley Drilling Project in the 1970s were unsuccessful.

The most famous feature of the Valleys is Blood Falls, an intermittent outpouring of highly saline, iron-rich water from Taylor Glacier into Lake Bonney, which stains the surface of the glacier a deep crimson. This is thought to be caused to by the weight of the glacier pressing down on deepsubsurface waters and forcing them to migrate upwards. The waters of Blood Falls are known to host a rich microbial community, which probably help to weather iron from the bedrock metabolically. The water of blood falls is sufficiently saline to remain a liquid a -6˚C at surface pressures, and therefore at cooler temperatures in the higher pressure conditions beneath the glacier. 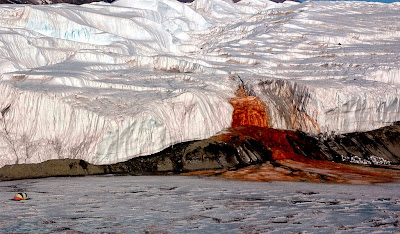 Mikuckiet al. used a system called SkyTEM, which uses a high-powered transmitter loop carried by helicopter to induce subsurface electromagnetic currants. Similar systems have previously been used to map permafrost and buried ice features in the Alaskan Arctic and on Livingstone Island off the coast of Anartica.

Map of Taylor Valley in Antarctica. (a) Map of major lakes, glaciers and Antarctic Dry Valley Drilling Project (DVDP) boreholes in Taylor Valley, Antarctica. Dotted red line indicates the location of the Lake Fryxell DVDP geophysical survey. (b) Airborne electromagnetic flight lines in green with survey lines for which data were processed shown in yellow. Terrain surveyed in this paper is highlighted in red. Dashed line indicates regions where higher-resolution surveys were conducted in the Bonney and Fryxell Basins. Red circle indicates the location of the example SkyTEM sounding. Mikucki et al.(2015).

Mikucki et al. were able to differentiate buried brine systems, which have very low resistivities, in the order of 10–100 Ωm, from buried ice, which has a very high resistivity, in the order of 500–20,000Ωm. This enabled them to detect two extensive brine systems in the McMurdo Dry Valleys, one beneath Taylor Glacier and the upper Lake Bonney Basin and one beneath Lower Taylor Valley and the Lake Fryxell Basin.

Resistivity cross-section for the length of the Taylor Valley. Resistivity profile along the length of the Taylor Valley. Low resistivities near McMurdo Sound to Lake Hoare interpreted as hydrological connectivity of brine in sediments extending from the coastal margin inland and beneath the Canada Glacier. To the west, resistivities increase below Suess Glacier and again towards Lake Bonney. In the Bonney Basin, low-resistivity patterns suggest connectivity of brine-rich sediments below the Taylor Glacier with proglacial Lake Bonney at the glacier terminus and near the location of Blood Falls. Mikucki et al.(2015).

The McMurdo Dry Valleys are thought to have formed as a fjord system in the Miocene, when a wetter climate led to a more extensive Taylor Glacier (glaciers are ultimately formed from snowfall, so a warmer wetter climate will often produce a more extensive glacier than a cooler dryer one, as long as temperatures at the glacier itself remain below freezing point for most of the time) which extended during cooler periods and was intruded by seawater in warmer spells. During this cycle seawater would have become trapped in the valleys then turned to dense brines through cryoconcentation, a process in which the majority of the water freezes but the dissolved salt, which does not freeze, is concentrated in the remaining liquid. This would have led to a build-up of salts in the sediments beneath the valleys.

In the 1980s it was theorized that during the Pleistocene glacial episodes much of the McMurdo Dry Valleys would have been occupied by a glacial lake (lake trapped behind a glacier), Lake Washburn. However more recent studies have suggested that this may only have occupied the western part of the Valleys, with the lower eastern part alternatively occupied by a raised and intruding Ross Ice Shelf (sea ice floating on water) and a series of smaller glacial lakes. The repeated forming of such lakes from trapped seawater would have served to further raise the salinity of sediments in the lower Valleys by cryoconcentation.

Prior to this study the lakes of the McMurdo Dry Valleys were assumed to all be separate bodies, however Mikuckiet al.’s results suggest that the lakes of the lower Valleys are in fact connected by an extensive subsurface brine system which enables movement of water from one lake to another down the Valleys, beneath the separating glaciers.

Conceptual diagram depicting predicted hydrological connectivity. Two distinct regions of subsurface brine were identified in the MDV. The ‘?’ indicates the zone between Lake Bonney and Lake Hoare where no connectivity was identified with the survey. Mikucki et al. (2015).

The waters of Lake Hoare are known to be less saline than those of the other lakes in the Valleys. Previous studies of the system have postulated that the lake dried up completely about 12 000 years ago, leaving extensive evaporate salt deposits, which were then removed by aeolian transportation (blown away by the wind). However Mikuckiet al.’s findings suggest an alternative (and simpler) explanation; the waters of Lake Hoare are less saline because it the headwater lake in an extensive groundwater system, and water is continuously flowing from the Lake Hoare into Lake Fryxell, and subsequently into the McMurdo Sound, carrying with it some of the dissolved salt from the lake. Lake Fryxellis more saline than Lake Hoare as it is receiving salt from it, but is in turn losing salt into the McMurdo Sound. Lake Bonney is the most saline lake in the Valleys, as it is receiving brine input from beneath Taylor Glacier, but has no outlet.

The weight of Canada Glacier may be causing enhanced discharge of brine into Lake Fryxell in the same way that the weight of Taylor Glacier is into Lake Bonney. However there is no visible surface discharge as seen at Blood Falls, so if this is occurring it is entirely beneath the lake.

It has also been theorized that Mars may host such buried brine systems, the remnants of ancient oceans once present on the planet’s surface, and that such brine systems could also be host to microbial life. While Mikucki et al.’s study cannot shed any direct light upon this idea; it does produce further evidence that such systems might at least be possible, and presents a viable method for searching for such buried briny waters on Mars.

The Antarctic Summer Monsoon.
The Eocene palaeoflora of the Antarctic Peninsula and neighbouring islands has been studied  since the early twentieth century, with fossil sites on the Peninsula itself as well as on Seymour, Alexander and King George islands yielding a large number of wood fossils... 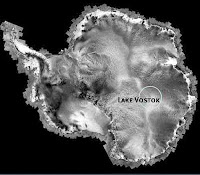 Russian scientists prepare to break through into Lake Vostok.
Lake Vostok is a subglacial lake under the East Antarctic Ice Shelf. It is about 500 m below sea-level, but is buried under 4 km of ice. The lake is approximately 250 km long, by 50 km wide and has an average depth of 344 m. Lake Vostok was covered by the ice between 14 and 25 million years ago...

Drilling for Lake Ellsworth.
Lake Ellsworth is a sub-glacial lake in West Antarctica, it is about 70 km west of the Ellsworth Mountains, and approximately 3.4 km beneath the West Antarctic Ice Shelf. The lake has a long narrow throat and is...
Follow Sciency Thoughts on Facebook.