Geminid Meteor Shower should be clearly visible this year.


The Geminid Meteor Shower is expected to peak on Sunday 13-Monday 14 December this year (2015) with potentially up to 120 meteors per hour being visible in areas of the Northern Hemisphere with a clear sky. This comes immediately after the New Moon on 12 December, so only a thin crescent moon will be present in the sky, so that the meteors should be clearly visible. The meteors appear to radiate from a point in the constellation of Gemini, hence their name. 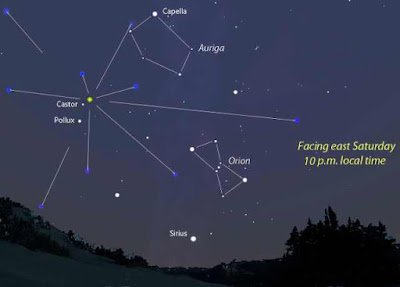 The radiant point (apparent point of origin) of the Geminid Meteors in 2015. Astro Bob.

Oddly for a meteor shower, the Geminids do not appear to be related to a comet, but instead are associated with an object called 3200 Phaethon, which is classed as an Apollo Asteroid (an asteroid with an orbit that crosses that of the Earth). 3200 Phaethon has a highly elliptical orbit, which takes it in as close as 0.14 Au (14% of the distance between the Earth and the Sun, more than twice as close as Mercury) and out as far as 2.4 AU (2.4 times as far from the Sun as the Earth or 1.6 times as far as Mars). 3200 Phaethon does not appear to produce any sort of halo (a cloud of material produced by the evaporation of gas ice from the surface of a comet, thought to be the source of most meteor showers); rather it appears dark in colour an is classed as a B-type Carbonaceous Asteroid, thought to have a surface covering of  anhydrous silicates, hydrated clay minerals, organic polymers, magnetite, and sulphides.

Asteroid 3200 Phaethon is a 5 km body with a highly eccentric orbit similar to that of a comet, which takes it closer to the Sun than any other named Asteroid. It appears to be the parent body of the Geminid Meteors, which share essentially the same orbit as it, as well as a group of larger bodies known as the Phaethon-Geminid Complex. Such meteor showers typically form from the tail of a comet; as the comet approaches its perihelion (the closest point in its orbit to the Sun), ice at the surface sublimates away (turns directly from a solid to a gas - liquids do not form in a vacuum), releasing particles of silica trapped in the ice, which continue to follow essentially the same path as the comet, creating a meteor shower every time the Earth passes through this stream. However, 3200 Phaethon, which has a 1.43 year orbital period in which it reaches 0.14 AU from the Sun (14% of the distance between the Earth and the Sun, or less than half the distance at which Mercury orbits) is thought to regularly suffer surface temperatures in excess of 1000K, making it highly unlikely that it has ice on its surface, which calls its potential role as the parent body to the Geminid Meteors into question.

Composite images of 3200 Phaethon in 2009 (top row) and 2012 (bottom row) compared with the projected sun- comet line (white). The Sun is to the upper right in each panel. Insets are 49000 square and show eld stars near to Phaethon to demonstrate the point spread function of the data. Each panel has North to the top, East to the left and shows the median of 30 images taken over a 1 day period. Jewitt et al. (2013).

Jewitt et al. suggest that at it's perihelion 3200 Phaethon is being heated to such a degree that hydrated minerals at its surface could be thermally fractured and desiccated, leading to the ejection of dust particles.
See also... 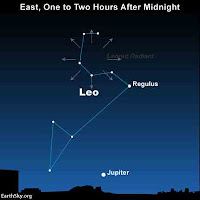 Leonid Meteor Shower falls this week.       Each year between 15 and 18 November (approximately), typically peaking between midnight and dawn on 18 November, the the Earth encounters the Leonid Meteors, one of the more spectacular of the annual meteor showers. Unlike most such showers, which are essentially composed of dust particles, the Leonids comprise particles of up to 8 mm across and up to 85 g in mass, leading to some...

Fireball over northern Europe.           Eyewitnesses across much of northern Europe reported seeing a bright fireball in the sky moving southwest to northeast at about 6.05 pm GMT on Saturday 31 October 2015. The event was seen from the Netherlands, Germany, Denmark, southern...
Follow Sciency Thoughts on Facebook.