Chewing Lice, Ischnocera, are considered to be primitive members of the Lice order, Phthiraptera, which lack specialist adaptations for sucking blood or other bodily fluids. Like other Lice they are ectoparasites living externally on the bodies of warm blooded hosts, usually Birds though one group targets Lemurs, feeding on the feathers and skin of the host. The Philopterid Chewing Lice target a wide range of Birds around the world, including Passarines, Kingfishers, Parrots, Trogons and Woodpeckers.

In a paper published in the journal ZooKeys on 1 December 2015, Michel Valim of the Museu de Zoologia at the Universidade de São Paulo and Armando Cicchino of the Laboratorio de Artrópodos at the Universidad Nacional de Mar del Plata describe a new species of Chewing Louse from a Great Jacamar, Jacamerops aureus ridgwayi, from Pará State in Brazil.

The new species is given the specific name Bobdalgleishia stephanophallus, where 'Bobdalgleishia' honours the late entomologist Robert Dalgleish for his 'special disposition to listen and learn from those who disagree with him on taxonomic issues', and 'stephanophallus' means 'crowned penis' in reference to the male reproductive structure. The species is described from two male and one female specimens found on the preserved skin of a Great Jacamar from the Museu de Zoologia da Universidade de São Paulo obtained in 1943. Valim and Cicchino are aware of the hazards of describing ectoparasites from museum specimens, with a number of documented cases of species being described erroneously based upon poorly preserved parasites that had been transferred to animals other than their hosts post mortem, and to this end examined a large number of further Great Jacamar specimens looking for further examples of Bobdalgleishia stephanophallus without success. In the end it was decided that with well preserved specimens of both sexes it was possible to describe the species, particularly as the specimens show a number of distinctive features not seen in any other documented species, most notably long occular settae (hairs on the eyes), which should make it possible to re-identify this species if it is subsequently found on a different host. 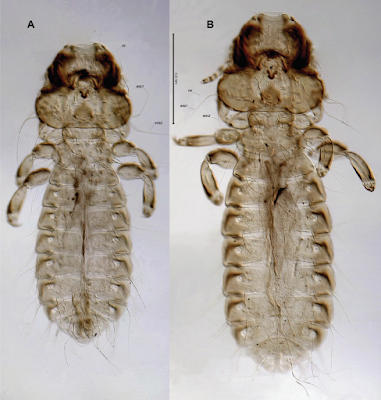 Three new species of Chewing Lice from Limpopo Province, South Africa.            Chewing Lice are parasites living in the feathers of Birds (or occasionally the fur of Mammals). They are considered to be more primitive relatives of the... 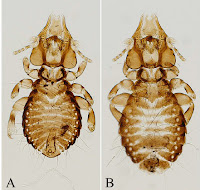 Three new species of Chewing Lice from Bulbuls in northern Vietnam.                   Chewing Lice (Amblycera and Ischnocera) are specialized parasites on birds and sometimes mammals. They are considered primitive members of the Louse Order Phthiraptera, since they lack the specialized mouthparts that other lice use to drain blood from their hosts, instead either eating dead skin...
Follow Sciency Thoughts on Facebook.
Posted by Joe Bauwens at 18:33