Numerous deaths feared after landslide at waste tip in Shenzhen.

Many people are feared to have died following a landslide at construction waste tip in the city of Shenzhen in Guangdong Province, China, on Sunday 20 December 2015. The event is thought to have buried numerous workers at the site as well as nearby homes and businesses. Only two bodes have been recovered during the event, but at least seventy eight more are missing, and it is feared that the actual number burred may be higher due to the high number of migrants from the Chinese interior living and working in the area, who may not have been reported. A further sixteen people are being treated in local hospitals, three of whom are described as being in serious conditions. 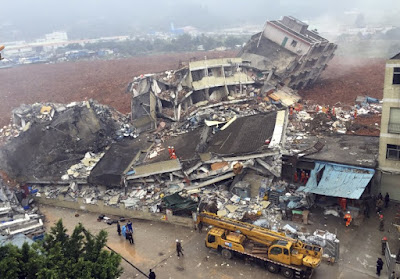 The scene of the 20 December 2015 Shenzhen landslide. AP.

The waste site was opened at a former quarry in 2013, to accommodate waste from the city's numerous construction sites, however it had outgrown its original purpose with waste piled several tens of meters above the quarry at the time of the collapse, with many people in the area having expressed concern about the situation and an environmental consultancy, Zongxing Technology, having  published a report in January this year highlighting the site's instability, which resulted in operations being halted temporarily, though it is unclear what steps were taken to alleviate the problems before activity resumed. Running of the site was contracted to a company called Lüwei Property Management, however the actual management of the site was undertaken by a subcontractor, Yixianglong Investment, and Lüwei Property Management are claiming to have also raised concerns about conditions at the site.

The approximate location of the 20 December 2015 Shenzhen landslide. Google Maps. 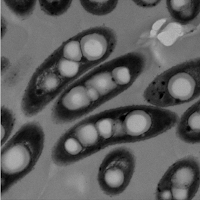 A new species of heavy metal Tolerant Bacterium from the Dabaoshan Mining Area in Guangdong Province, China.                 Heavy metal extraction is a notorioulsy high pollution risk industry, as the metals are highly toxic to most forms of life, and most extraction techniques involve extracting them from ores using acids or other toxic materials (e.g. mercury), creating a toxic sludge, which, if it escapes into the environment, can prove extremely harmful...