Cuckoo Wasps, Chrysididae, are brightly coloured and usually metallic Wasps found around the world, but most abundant in desert areas. They are kleptoparasites, laying their eggs in the nests of other solitary Wasps and Bees, where the larvae emerge and consume both the larvae of the nest-builder and the food with which it was provisioned.

The first new species is named Philoctetes longiflagellis, meaning ‘long-flagella’, in reference to the long antennae of the species. These are metallic-green Wasps a little under 4 mm in length with short white setae (hairs) on their bodies. The antennae of the males are notably longer than those of the females, which is unusual in Cuckoo Wasps and has never previously been recorded in members of the genus Philoctetes. The species was found in Inner Mongolia and Shanxi Provinces. 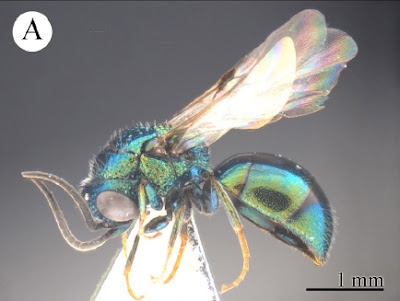 The second new species described is named Philoctetes simulator, meaning ‘swindler’, in reference to its close appearance to two other members of the genus, Philoctetes micans and Philoctetes friesei, which is potentially misleading. This species is described from a single female specimen 3.6 mm in length and metallic green in colour with metallif red, blue and black markings. The specimen was found in the city of Tianjin in northeast China. 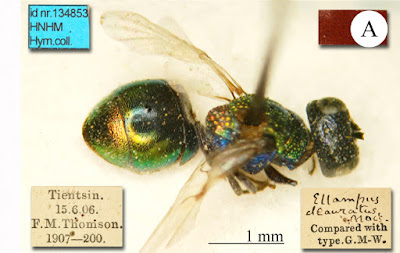