Earwigs, Dermaptera, are one of the smaller orders of Insects and consist of approximately 2000 modern species segregated into 12 families. These are distinctive Insects, with their generally flattened appearances, often leathery integument, tegminized forewings, broad fan-shaped hind wings, and, most distinctive of all, the terminal forceps formed of their modified cerci. Within the Dermaptera, the modern fauna falls entirely within the suborder Neodermaptera, with the earliest definitive Neodermaptera are found in the Lower Cretaceous. There have been 22 Neodermapteran Earwigs described from Cretaceous amber. Of these, six are classified in the extant family Pygidicranidae, including four adults and two nymphs. Although the record of Earwigs preserved in Cretaceous and Cenozoic amber has grown rapidly, well-preserved specimens of adult earwigs are still rather uncommon and it remains a difficulty to associate nymphs with adults when not found as syninclusions. Moreover, the precise phylogenetic placement of many fossil Earwigs continues to be poorly understood.

The new species is placed in the genus Astreptolabis, which currently contains one other species, Astreptolabis ethirosomatia, also from Burmese Amber, and given the specific name laevis, meaning, 'polished' or  'smooth', in reference the integumental surface (skin) of the species. Astreptolabis laevis is described from three specimens, two females and a male with its genitalia partly exerted (the male genetalia is considered important in the classification of Insects, but is seldom preserved in fossils.The specimens were collected from mines in the Hukawng Valley of Kachin; the amber mines are located at the north end of Noije Bum village, approximately  18 km southwest of Tanai. 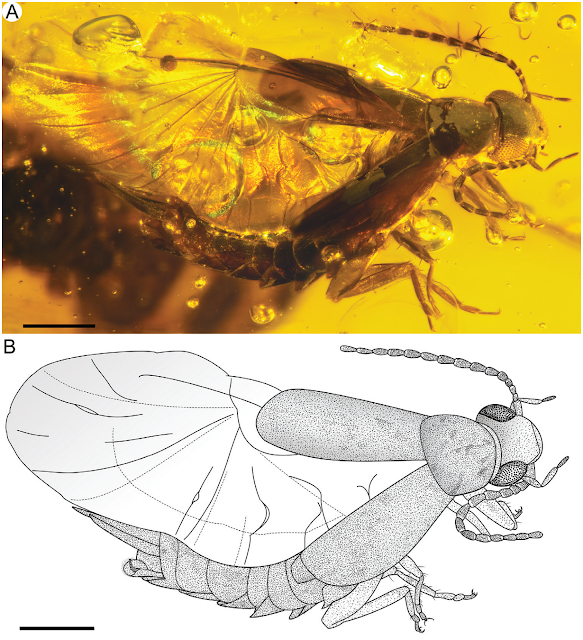 The genus Astreptolabis is placed on its own within a separate, extinct, subfamily of the Pygidicranidae, the Astreptolabidinae, which is distinguished by its small size, 3.50–5.30 mm in length, and straight and tubular cerci which, would have been of little use as grasping foreceps. Astreptolabis laevis can be distinguished from Astreptolabis ethirosomatia by the lower number of setae (hairs) on itshead, thorax and tegmina (modified forewings which form a wing case into which the hind wings are folded), and the larger compound eyes, which encompass the entire lateral surface of the head from the antennal articulations to the posterior border. 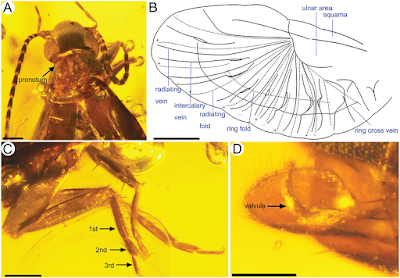 The larger of the two female specimens has a total length of 3.61 mm,, the male 5.30 mm. The hind wing of the holotype of Astreptolabis laevis is well preserved, and one is unfolded and extended. The base of the hind wing is obscured because of the position of the specimen, but most of the preserved structures are similar to those of extant Earwigs. The female paratype CNU-DER-MA2018002 shares the same characters with the holotype, but the integument of this paratype is somewhat roughened and the pronotum seems broader than the holotype; however, these differences may be the result of taphonomy. The male paratype CNU-DER-MA2018003 shares the same characters with the holotype except for a larger body size, which seems to be a sexual difference. Otherwise, differences in body size are mainly reflected in tegmen length and abdominal length which are longer than the female, but otherwise proportional. 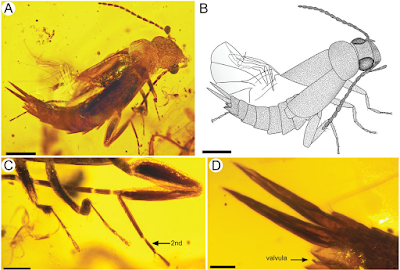 Up to now, many than 1000 species of insects have been reported from Burmese Amber, including Termites, Stick Insects, Scorpionflies, lots of Wasps, Beetles, Lacewings, etc.; however, Earwigs are still quite rare compared to most of the other groups. Astreptolabis spp. are the smallest Earwigs within Pygidicranidae so far, females being as small as about 3.5 mm in length including cerci. Antenna has at least 14 antennomeres, which is an unusually small number for basal Neodermaptera and likely autapomorphic for the subfamily. Although the known representatives are quite peculiar among living and fossil Earwigs, particularly in the straight, tapering, tubular cerci which clearly would have had little force as a grasping structure (contrary to virtually all other Neodermaptera), it has the usual traits typical of the suborder such as the absence of ocelli, the trimerous tarsi, unsegmented cerci, and absence of venation in the tegmina. The straight and tubular cerci which likely did not function for grasping could imply that Astreptolabidines used other strategies for predation, or were scavengers or detritivores and therefore did not hunt. The new species is typical in nearly all traits with the type species, aside from minor differences in largely setation, and proportions of structures. Nonetheless, the new species helps to refine our understanding of the circumscription for the genus and subfamily, and gives us some initial knowledge as to variations that may occur within the lineage. Unfortunately, while it would be revealing to learn more about the structure of the ventral cervical sclerites and thoracic sterna, these cannot be discerned in any of the new specimens and await future discoveries to provide such insights. Nonetheless, the discovery of the male for the group is important, and the uniqueness of the Astreptolabidinae is reinforced by the peculiar features of the male genitalia. Like other Pygidicranidae, the male has two virgae, rather than four terminal virgal sections present in Diplatyidae. However, unlike most other Pygidicranidae the parameres are broader and lack terminal teeth or incisions, and are instead comparatively simple, tapering to an acute apex. These are either specializations apomorphic for the subfamily, or could also suggest that including Astreptolabidinae within Pygidicranidae renders the family paraphyletic. If the latter, then there may be need to elevate the subfamily to family rank, but such a formal decision must await further character data such as the form of the thoracic sterna which could provide evidence of affinity to one or more subfamilies within Pygidicranidae as currently defined. However, the female valvulae slightly extending beyond the subgenital plate is a trait known only among the Pygidicranidae, and this feature in Astreptolabis laevis tends to corroborate its inclusion among pygidicranids. For the time being, the male of Astreptolabis laevis emphasizes the distinctiveness of the lineage and highlights the need to obtain further character data for this group of peculiar, ancient Neodermaptera. If the subfamily were to fall outside of Pygidicranidae it remains uncertain whether it would be basal to the family or more closely related to Epidermaptera, and perhaps information on sternal forms would aid such a determination. The presence of complex, heavily sclerotized accessory structures ventral to the paired distal lobes is at least reminiscent of the accessory structures sometimes found among Diplatyids, although the size and form of those in Astreptolabis are drastically different. If these were homologous, then it might suggest that Astreptolabidinae are intermediate in phylogenetic position between the basal families Diplatyidae, Haplodiplatyidae, and Karschiellidae relative to Pygidicranidae. 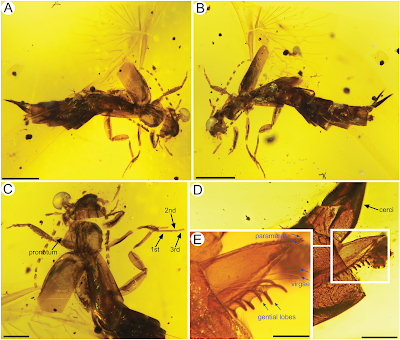 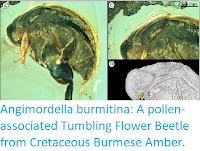 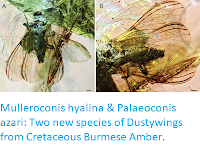 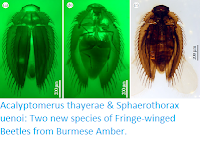 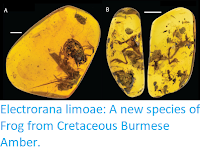