Mauna Loa Volcano, located on Big Island Hawai'i, and considered to be the world's largest active volcano, began erupting at about 11.30 pm local time on Sunday 27 November 2022 (about 9.30 am on Monday 28 November GMT), producing effusive lava eruptions from the Moku‘āweoweo Caldera. By the following morning, the eruptive activity had migrated to the upper Northeast Rift Zone, producing lava streams descending the volcano's northern flank. An initial ash advisory was issued but quickly withdrawn, and no properties are currently threatened by the lava flows, which are all contained within the Hawai‘i Volcanoes National Park. 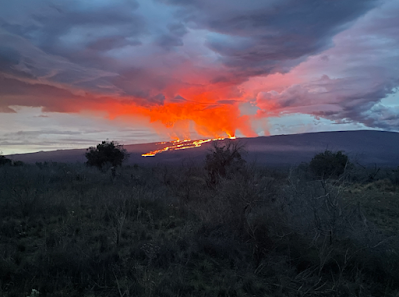 Mauna Loa is a shield volcano (broad, dome-shaped volcano) made up largely of successive layers of basalt lava, which have been flowing from fissures on roughly the same spot for about 700 000 years. The volcano has risen from a seafloor 5000 m beneath the surface to its current altitude of 4170 m above sealevel, making it the world's tallest mountain of any sort (Everest reaches higher, at 8848 m above sealevel, but rises from the Tibetan Plateau, more than 5000 m above sealevel, so it's height is much lower). The volcano covers an area of about 5271 km², and makes up about half the area of Big Island. 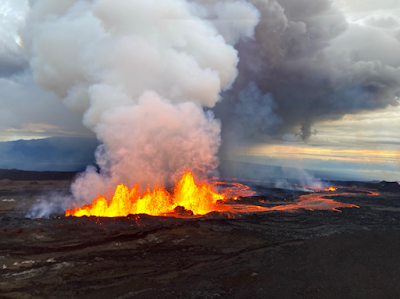 Aerial photograph of the dominant fissure 3 erupting on the Northeast Rift Zone of Mauna Loa, taken at approximately 8.00 am Hawai'ian Standard Time on Tuesday 29 November 2022. Fountains were up to 25 m high, and the vent was feeding the main lava flow to the northeast. United States Geological Survey.

Despite being a highly active volcano (with 33 eruptions since 1843), Mauna Loa is not considered to be a particularly dangerous volcano, and injuries associated with its eruptions are rare. This is because most of the activity on the volcano is in the form of slow moving lava flows, which most people are capable of simply walking away from. The last eruption on Mauna Loa occurred in 1984, when lava flows reached within 8 km of the town of Hilo, the largest settlement on Big Island, causing no damage or injuries. However, since the 1980s the population of Big Island has more than doubled, increasing the risk of lava flows reaching populated areas. 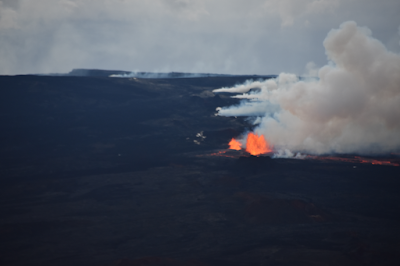 The islands of Hawai'i have formed as a result of hotspot volcanism, with a mantle plume hotspot currently located under Big Island, Hawai'i, and each of the other islands being the result of previous activity from the same hotspot, with the oldest Islands in the northwest and newest in the southeast. A volcanic hotspot is an area where magma from deep inside the Earth is welling up through the overlying plate (in this case the Pacific) to create volcanism at the surface. Volcanoes move as they erupt, swelling as magma enters their chambers from bellow, then shrinking as that magma is vented as lava. 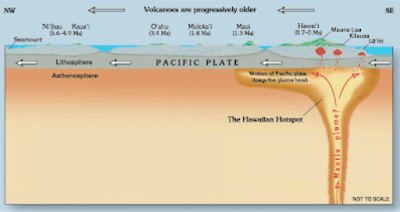 The position of the Hawai'i Hotspot relative to the islands of Hawai'i. Joel Robinson/USGS/Wikimedia Commons.