The United States Geological Survey recorded a Magnitude 5.7 Earthquake at a depth of 4.7 km roughly 49 km to the northeast of the port of Bandar-e Lengeh in Hormozgan Province, Iran, slightly after 6.45 pm local time (slightly after 3.15 pm GMT) on Wednesday 30 November 2022. There are no reports of any damage or casualties associated with this event, but many people in the United Arab Emirates reported feeling it.

The location of the 30 November 2022 Hormozgan Province Earthquake. USGS.

Iran is situated on the southern margin of the Eurasian Plate. Immediately to the south lies the Arabian Plate, which is being pushed northward by the impact of Africa from the south. This has created a zone of faulting and fold mountains along the southwest coast of the country, known as the Zagros Thrust Belt, while to the northeast of this the geology is dominated by three large tectonic blocks, the Central Iran, Lut and Helmand, which move separately in response to pressure from the south, stretching and compressing the rock layers close to the surface and creating frequent Earthquakes, some of which can be very large. 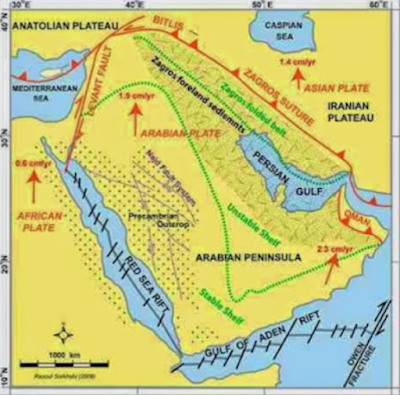 The movement of the Arabian Plate and extent of the Zagros Thrust Belt. Rasoul Sorkhabi/Geo ExPro.
The population of Iran is particularly at risk from Earthquakes as, unlike most other Earthquake-prone nations, very few buildings in the country are quake-resistant. The majority of residential buildings in Iran are made of mud-brick, a building material particularly vulnerable to Earthquakes as the bricks often liquefy, trapping people inside and quickly asphyxiating them with dust. This is particularly dangerous at night when the majority of people are inside sleeping. 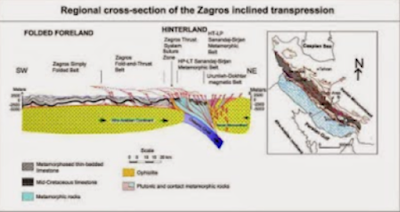