A fossil Neobalaenine Whale from the Late Miocene of Argentina.

The Pygmy Right Whale (Caperea marginata) is not considered to be closely related to other Baleen Whales, though it's precise affinities have alluded taxonomists for some time. It has been suggested that it is related to true Right Whales (Balaenidae), Rorquals and Grey Whales (Balaenopteroidea) and the extinct Cetotheres. At the moment it is generally place in its own family, the Neobalaenidae.

In a forthcoming paper available on the website of the journal Acta Palaeontologica Polonica from 12 April 2013, Mónica Buono and Maria Dozo of the Laboratorio de Paleontología at the Centro Nacional Patagónico and Felix Marx and Ewan Fordyce of the Department of Geology at the University of Otago, discuss the discovery of a mandible (jawbone) of a Neobalaenine Whale from a fallen block from the the Puerto Madryn Formation at Punta Ninfas on the southeast coast of Golfo Nuevo in Chubut Province, Argentina. 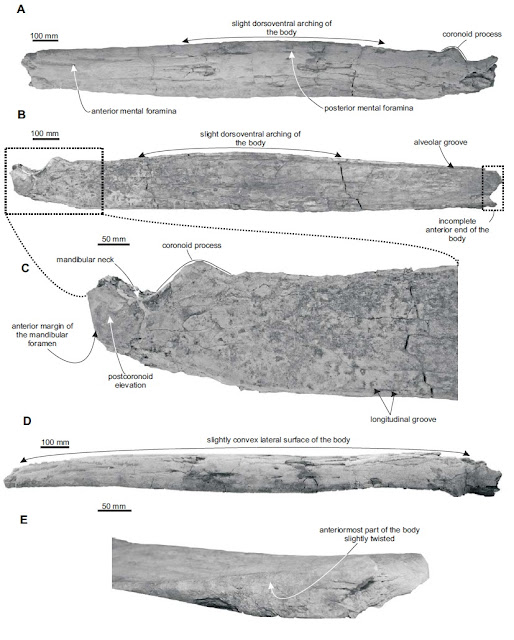 Due to the limited material available the specimen is not described as a new species, but it is considered to be indicative that the Neobalaenine Whales existed as a separate group in the Late Miocene, 10 million years ago and two million years older than any fossil previously assigned to the Neobalaenidae, supporting the idea that the Pygmy Right Whale is indeed taxonomically distinct from other extant Baleen Whales. It is also noted that all fossil Neobalaenine Whales yet described have come from the Southern Hemisphere, despite the fact that palaeontologists have been actively seeking large vertebrate fossils in the Northern Hemisphere for longer and more intensively, supporting the idea that this group has always been restricted to this area, which in turn supports the idea that they are distinct from more globally distributed groups such as the true Right Whales. 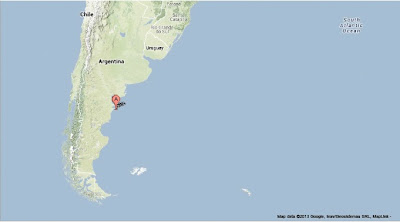 The approximate location of the site where the specimen was found. Google Maps.

See also A Baleen Whale from the Late Miocene of southern Ukraine, Genetic diversity in Grey Whales, Bowhead Whales in the Northwest Passage, Fossil beaked whales from the seafloor of the Southern Indian Ocean and A Sei Whale stranded in the Humber Estuary.