Punctatus emeiensis, not a Cnidarian after all?

Punctatus emeiensis is an enigmatic fossil from the earliest Cambrian of northern China. Many thousands of specimens have been found from a number of different sites, providing complete growth series for the animal, from single celled eggs to mature individuals a few millimeters in length. The adults have diploblastic (two layered) body, radial symmetry, a simple gut in which the mouth also serves as an anus and a segmented external body lacking limbs or tentacles. For many years scientists have either ignored their higher classification, of placed them within the Phylum Cnidaria (which includes modern Jellyfish, Corals and Sea Anemones), with possible affinities to the extinct Conularids.

In a paper published in the journal PLoS One on 20 June 2013, a team of scientists led by Kinya Yasui of the Department of Biological Sciences at the Graduate School of Science at Hiroshima University, discuss the results of a study in which they examined over 10 000 individual Punctatus with the aim of better understanding their development, biology and taxonomic affinities. 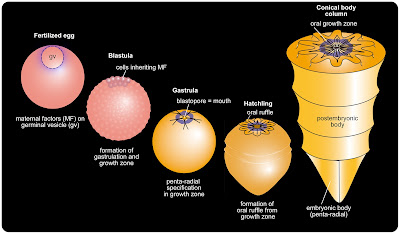 The development of Punctatus from an egg to a mature individual several millimeters long. Yasui et al. (2013).

Diploblastic animals develop from two layers of cells, one of which becomes the lining of the gut and tissues derived from it, the other the external skin and tissues derived from it. This method of development is found in two modern groups of animals, the Cnidarians (Jellyfish etc.) which have radial symmetry and a simple gut with a single opening that serves as both mouth and anus, and the Ctenaphores (Comb Jellies) which are bilaterally symmetrical and have a through gut. Apart from the Sponges (Porifera), which lack any true tissues or even much cell differentiation, every other modern animal, from Worms to Pandas via Starfish and Snails, has triploblastic development, with a third layer of tissue between the inner and outer layer, from which many of the internal organs develop. It should be noted that which layer an organ develops from does not entirely determine what sort of tissue it becomes; in humans the skull, pelvis and shoulder blades develop from the external layer and most other bones from the middle layer. 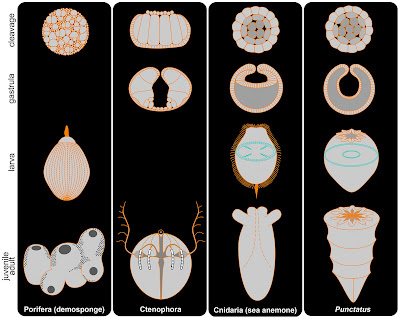 Beyond this, however, the similarities between Punctatus and the Cnidarians is less convincing. Yasui et al. note that Punctatus appears to lack any divisions within the gut, something seen in almost all Cnidarians, including species smaller than Punctatus. These divisions of the gut greatly increase the surface area over which Cnidarians digest food, so any animal lacking them would have a correspondingly lower food intake, and therefore its metabolism and biology are likely to be quite different to those of a Cnidarian. Secondly, Punctatus shows no signs of having had any tentacles, a trait seen in almost all Cnidarians. Yasui et al. note that in theory Punctatus could have had tentacles which have not survived the preservation process, but given the very large number of specimens, and the excellent preservation of soft tissues of the mouth-flaps seen in many of these specimens, this seems rather unlikely. Thirdly Punctatus has no trace of a sticky holdfast, something seen in almost all benthic Cnidarians. Fourthly Punctatus has pentameral (five-way) radial symmetry, unlike Cnidarians which have tetrameral (four-way) radial symmetry. Fifthly Punctatus seems to have reproduced exclusively sexuallym whereas almost all Cnidarians also reproduce by budding or dividing to form clones of the parent. Finally Punctatus grew throughout its life by the development of new segments around the oral area, so that the embryonic body is retained as the tip of the tail in adults, which the mouth is always the youngest part of the organism. This is quite unlike anything seen Cnidarians. 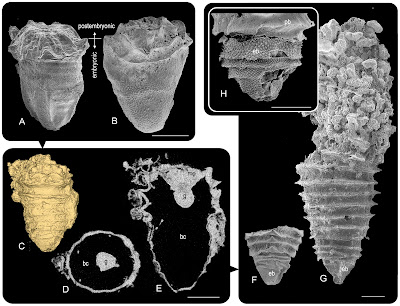 Based upon this data, Yasui et al. suggest that Punctatus cannot comfortably be placed within any the Cnidarians as we currently define the group, and suggest that either it should be regarded as the sister taxon to all other known Cnidarians, having split from the group before all other taxonomic diversification took place (not unreasonable in an earliest Cambrian animal) or that it be considered an entirely separate animal sharing only a common level of development with the Cnidarians.

They were not able to make any firm predictions about how Punctatus fed, beyond that it could not have fed in the same way as familiar Cnidarians. They suggest that its simple, undivided stomach cavity may have contained symbiotic algae or bacteria. 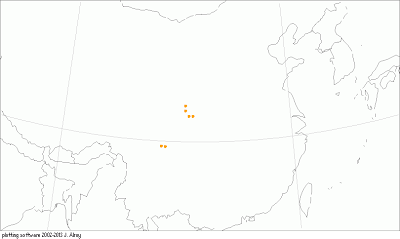 Map showing the distribution of sites that have produced Punctatus fossils. Paleobiology Database.

See also The mysterious ebb and flow of Jellyfish populations, A new species of Hydrozoans from British Columbia, The oldest animals - Pre-Ediacaran Sponges from Namibia(?), Mysterious new animal from the Burgess Shale and The Ediacaran Fauna; not animals after all?