Protests over environmental problems at Indian-owned Mozambique coal mine.

The Friends of the Earth-affiliated environmental group Justica Ambiental has taken up the case of villagers living close to an open-pit coal mine operated by Indian company Jindal Steel in Tete Province in western Mozambique. Villagers in the Chirodzi (Cahora Bassa), Chirodzi (Changara), Cassoca and Nyantsanga communities have complained of a permanent cloud coal dust from dynamiting at the pit enveloping their homes. Jindal obtained a 25 year concession to work at the site in 2011, and began work their early in 2013, without having arranged for the resettlement of local communities or negotiated with local landowners over access to land already in use, both of which were terms of the original concession. Manoj Gupta, the head of  Jindal Steel in Mozambique has blamed the government of Mozambique for the delays, claiming that resettlement began after the project was formally opened by Mozambican President Armando Guebuza on 6 August 2013, though shipments of coal from the mine to India began in May. 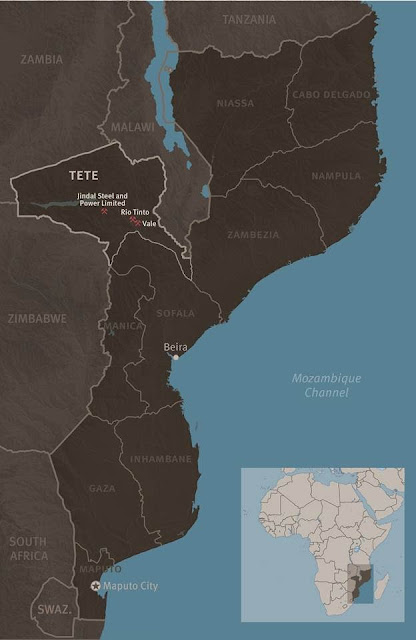 The location of the Jindal concession in Tete Province, Mozambique, as well as concessions being worked by mining companies Rio Tinto and Vale. Human Rights Watch.

The site suffered two days of violent protests in late July, in which a number of Jindal employees were assaulted, despite the presence of security guards and police, who were apparently unable to intervene due to the large number of people involved. Jindal have claimed that this was the work of 'outsiders' and that it has a good relationship with the local community.

Mozambique is one of the world's poorest and underdeveloped nations, and is still recovering from the effects of a civil war that lasted from 1977 till 1992, and was at least partly fueled by a desire of apartheid-era South Africa to undermine the stability of neighbouring nations it perceived as unfriendly. In 2001 Mozambique entered into an agreement with the Paris Club group of nations under which it was forgiven much of its overseas debt, in return for agreeing to a set of economic liberalization measures which included selling of many state owned enterprises and guaranteeing oversees companies access to mineral and other resources.

The country has currently granted mining concessions on 3.4 million hectares of land in Tete Province, roughly 34% of the province's total area, and is considering applications on a further 2.6 million hectares in the province, which brings the total to roughly 60% (Tete Province has an area of approximately 100 000 km², roughly the same as Colorado or Wales and Scotland combined).

In May 2013 Human Rights Watch expressed concern at the rapid development of the coal industry in Tete Province, in particular the displacement of farms and communities by Jindal as well as the Anglo-Australian mining giant Rio Tinto and Brazilian company Vale. An investigation found that formerly self-sufficient communities were being displaced to more arid areas, where they were unable to carry on traditional methods of agriculture, and were instead becoming reliant on food assistance for survival.