A new species of Turtle from the Late Cretaceous of Morocco.

Turtles are aquatic reptiles with a shell that encases their body, and into which the head and limbs can be retracted at least partially. They have a fossil record that dates back to the Late Triassic, about 220 million years ago, and they have been an important part of many marine and freshwater ecosystems ever since. Their exact relationship to other reptiles is difficult to determine from morphological evidence since their bodies have become so heavily modified, but genetic studies suggest that they are a sister group to the Archosaurs (Crocodiles, Dinosaurs and Birds). The Leatherback Turtles, Dermochelyoidae, lack the rigid boney shells of other turtles, instead having a carapace covered by thick oily skin, which has boney plates embedded within it. The living Leatherback (Dermochelys coriacea) is the largest extant Turtle species, reaching around 2.5 m, but it is thought some extinct species may have been even larger.

In a paper published in the journal PLoS One on 11 July 2013, a team of scientists led by Nathalie Bardet of the Département Histoire de la Terre, Muséum National d’Histoire Naturelle describe a new species of Leatherback Turtle from the Late Cretaceous phosphatic deposits of Sidi Chennane in the Oulad Abdoun Basin in central Morocco.

The new species is named Ocepechelon bouyai, where 'Ocepechelon' derives from 'OCP', acronym for the Groupe Office Chérifien des Phosphates, the mining company exploiting phosphatic deposits in Morocco, plus 'chelon', Greek for Turtle, and 'bouyai' honours Baâdi Bouya, head of the OCP Geological Survey in Khouribga.

The species is named from a single skull, excluding the lower mandible. The skull is 70 cm long, suggesting that the complete animal would have been considerably larger than the extant Leatheback Turtle, and has a unique set of features not seen in any other known living or fossil turtle. 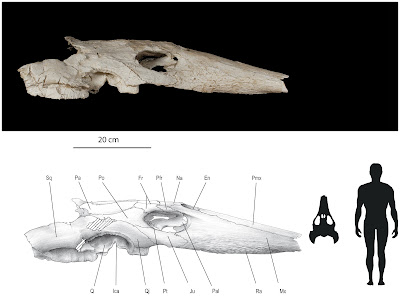 Ocepechelon bouyai has an elongated cylinder shaped snout, resembling a pipette, without any sign of teeth or other food-processing structures, as well as highly developed pterygoid flanges, forming wing-like structures on the sides of its head. 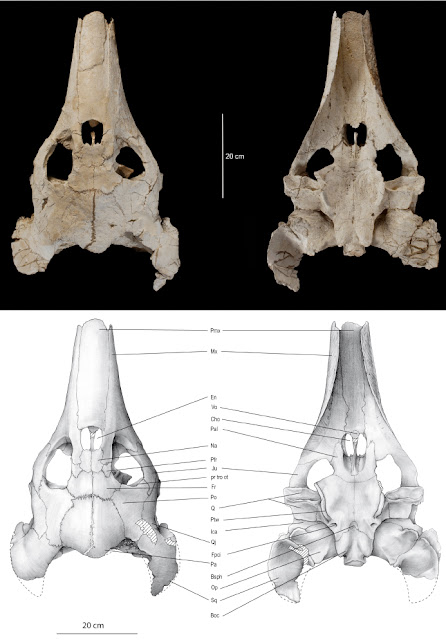 Bardet et al. interpret these structures to imply Ocepechelon bouyai was a suction feeder, with a feeding technique similar to that seem in Pipefish and Seahorses, but capable of targeting small Fish, Cephalopods (Squid, Octopus, Belemnites etc.) or Jellyfish, and driven by powerful muscles attached to the pterygoid flanges, which could have been used to create a vacuum in the mouth, sucking food in. 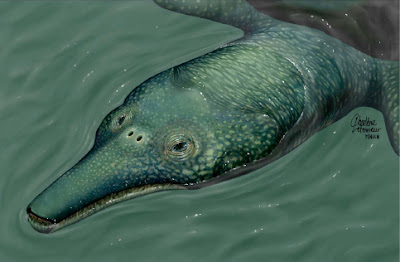 See also A Geomydid Turtle from the Miocene of Tanegashima Island, Japan, A Jurassic Turtle bone-bed from the far northwest of China, The death of Lonesome George and the extinction of the Pinta Island Giant Tortoise, An Eucryptodiran Turtle from the Early Cretaceous of Spain and A new species of Giant Side-Necked Turtle from the Palaeocene of Columbia.