The Icelandic Meteorological Office are reporting a series of steam explosions took place on Mount Kverkfjöll on the southeast of the Island on Thursday 15 August 2013. The explosions apparently occurred after increased glacier melting due to warm weather caused water levels in the Volga river to rise, causing water to enter a magma chamber. There is no immediate danger to human life, due to the remote location of the volcano, though Icelandic Civil Protection are advising tourists in the area to approach the volcano with caution. 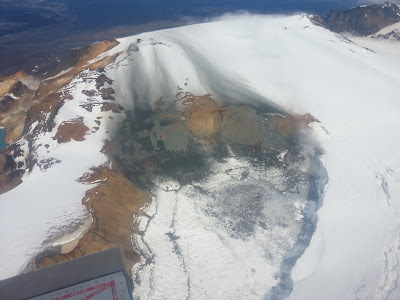 Areal photograph of the Kverkfjöll Crater on 16 August 2013. The black streaks on the glacier are thought to be the result of steam explosions. Icelandic Civil Protection.

Iceland lies directly upon the Mid-Atlantic Ridge, a chain of (mostly) submerged volcanoes running the length of the Atlantic Ocean along which the ocean is splitting apart, with new material forming at the fringes of the North American and European Plates beneath the sea (or, in Iceland, above it). The Atlantic is spreading at an average rate of 25 mm per year, with new seafloor being produced along the rift volcanically, i.e. by basaltic magma erupting from below. The ridge itself takes the form of a chain of volcanic mountains running the length of the ocean, fed by the upwelling of magma beneath the diverging plates. In places this produces volcanic activity above the waves, in the Azores, on Iceland and on Jan Mayen Island. 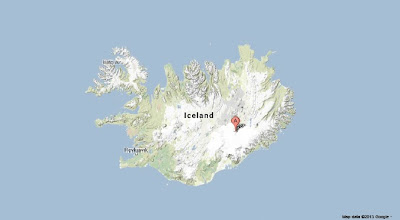 See also Earthquake off the north coast of Iceland, Large Earthquake near Jan Mayen Island, Magnitude 6.2 Earthquake north of Norway, The dangers of a modern Laki style eruption in Iceland and The Hekla Volcano - is the Gateway to Hell about to open?