How fencing the Tibetan prairies is effecting the endangered Przewalski’s Gazelle.

The Przewalski’s Gazelle (Procapra przewalskii) is a species of high altitude adapted Antelope, which formerly ranged across much of northwestern China and Inner Mongolia. It is now restricted to a small area around Qinghai Lake on the Tibetan Plateau, with a population comprising about 400 individuals, divided into six populations which apparently do not interbreed. The species was reduced to this level by hunting, but after being placed on the ICUN Red List of Threatened Species, China introduced laws to protect the Gazelles and hunting is now thought to be rare. However the population has continued to decline, causing conservationists to look for other forms of human activity that may be harming the animals recovery. The species is currently considered to be Endangered by the ICUN, but is only just above the Critically Endangered Level. 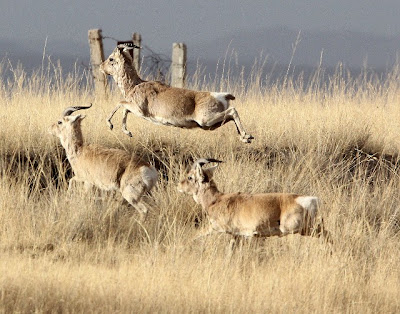 You et al. examined three populations of Gazelles, at Hudong-Ketu and Yuanzhe, where livestock fences have been introduced, and at Kuaierma, which remains unfenced. The study was based upon direct observation rather than radio tagging, due to the conservation status of the animals. Livestock fences have spread across much of the prairie-land of northern China, Inner Mongolia and the Tibetan Plateau in recent decades, with a 2002 study estimating that 70% of the area had been fenced.

It was found that animals in the fenced areas occupied much smaller territories than those in the unfenced areas, and roamed over lower distances each day. They also grazed without breaks fro shorter periods, and spent considerable amounts of their time walking along the fences. The Gazelles were capable of leaping the fences, but apparently did not often choose to do so. Deaths were recorded from animals becoming entangled in the fences, and predation by Wolves was higher in the fenced areas, suggesting that the fences presented a significant obstacle to the movement of the Gazelles. 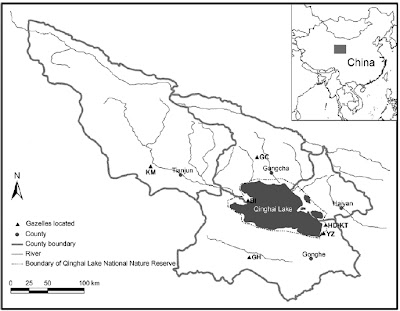 You et al. conclude that livestock fences present a significant threat to the long-term survival of Przewalski’s Gazelle, and note that previous studies have suggested that the fences also have a similar effect on populations of the Mongolian Wild Ass (Equus hemionus) and Tibetan gazelle (Procapra picticaudata). They suggest that an integrated sustainable grassland management scheme needs to be developed for the Central Asian grasslands in order to prevent a series of extinctions of the large Ungulates of the region.

See also A Giant Camel from the mid-Pliocene of Ellesmere Island in the Canadian Arctic, Small Llamas from the Late Pleistocene of Central Mexico, Three new species of Tapir from the Early Eocene of Pakistan, What a 4.6 million-year-old Three Toed Horse can tell us about the climate of Mid Pliocene Tibet and A Woolly Rhino from the Pliocene of Tibet.