A Hybodont Shark from the Middle Permian of Northern Arizona.

The Hybodonts were a group of Sharks that appeared in the Early Permian and persisted to the end of the Cretaceous (there are a few claims of post-Cretaceous Hybodont Sharks). They are considered to have been the sister group to the Neoselachii (the group that includes all modern Sharks, including the Skates and Rays), and generally similar in appearance, though they did not reach the very large sizes seen in some Neoselachians and and unlike modern Sharks were abundant in both marine and fresh water systems.

In a paper published in the New Mexico Museum of Natural History and Science Bulletin in 2013, independent researcher John-Paul Hodnett, David Elliot of the School of Earth Sciences and Environmental Sustainability at Northern Arizona Univeristy and Tom Olson of Benton, Arizona, describe a new species of Hybodont Shark, based upon teeth from the Middle Permian Kaibab Formation of northern Arizona.

The new species is named Diablodontus michaeledmundi, where 'Diablodontus' means Devil-tooth and 'michaeledmundi' honours Michael Edmund Hodnett (presumably a relative of John-Paul Hodnett).  The species is described from four teeth. These are clearly adapted for grasping prey, at odds with other Hybodont teeth of the period, which were almost entirely adapted for crushing hard prey, presumably shellfish, and suggests Diablodontus was a forerunner of the more actively hunting Hybodont Sharks that became abundant in the Mesozoic. The teeth can be confidently assigned to a Hybodont on the basis of an anaulacorhize (sponge-like) structure in the tooth base, which is a synapomorphy (a diagnostic trait) of the Hybodontiformes. 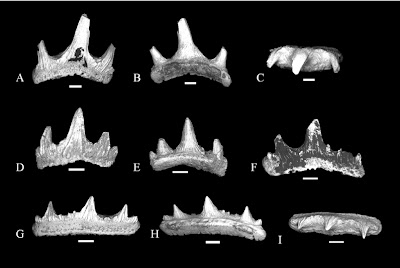 The specimens were found in the Fossil Mountain Member of the Kaibab Formation, thought to have been laid down in a shallow marine environment (the Kaibab Sea) between 272.3 and 268.8 million years ago. See also Fossil Tapeworm eggs from the Permian, Satellite tracking Manta Rays off the coast of Mexico and New species of Catshark from the Galapagos.